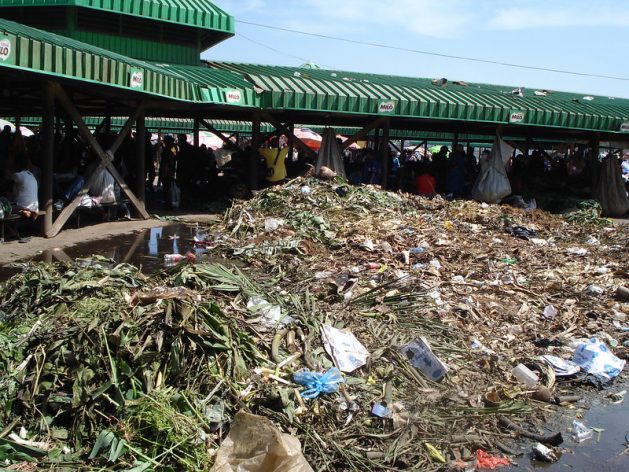 UNITED NATIONS, Mar 4 2021 (IPS) - Twenty percent of all food bought by households, retailers, restaurants and other food services in 54 countries around the world was thrown away in 2019 — contributing to some 931 million tonnes of food waste and feeding climate change.

This is according to the Food Waste Index Report 2021 which was launched today, Mar. 7, by the United Nations Environment Programme (UNEP) in collaboration with UK charity WRAP, which works in the areas of food waste prevention, plastics, sustainable textiles and clothing, resource efficiency and recycling. Research was conducted across 54 countries and the methodology for measuring food waste included citing research done on the ground in each country.

According to the report, most of the global waste comes from households — which throw away about 11 percent of the food available for consumption. Some of the most notable waste occurs in South Africa, Kenya and China.

The data for Kenya was more consistent than other countries between the two years the research was chosen from: 2010 and 2019. It found that higher-income households wasted significantly more food than middle and lower-income households.

South Africa appears to have the most comprehensive data over a period of six years, though it shows varying numbers. A 2016 report shows nationwide waste of 134 kgs per capita, whereas a 2017 report documenting only three regions shows 18 kgs per capita.

“South Africa has substantial domestic income inequality, which may contribute to varied results based on the socioeconomic profile of participants included or excluded in each study,” reads a part of the report. “The experience here encourages caution against putting too much weight on a single data point, as other countries may experience such variation with more studies conducted.

The report points out a major limitation in the research methodology: the lack of accurate data points. While this is not the case only for China, the discrepancy between these two numbers: 23 kgs to 150 kgs is “striking,” the report notes.

The major limitation with data was acknowledged in the report, and authors reiterated the importance of having access to more data points in order to make a comprehensive conclusion in the future.

The report states that data on food waste from households, food service and retail sectors is much less available in low-income and, in some cases, lower middle-income countries. For these cases, the data was generated by garnering estimates from nearby countries where the data was available.

Dr. Richard Swannell, director of WRAP, told IPS this discrepancy exists because of resources and prioritising — or a lack thereof.

“Robust measurements of food waste require research funding, which may be more forthcoming in developed countries,” he said. “In countries where waste collection systems are less formalised, and more waste is treated at home, by informal recycling systems etc. there may be additional barriers to accurate measurement.”

The other concern is on what governments prioritise.

“It has often been assumed that in developing countries, food resources are being lost during the first half of the supply chain — such as at the farm level, processing and transportation,” Swannell said.

He added that this aspect could fall under the category of food losses as part of the Sustainable Development Goal (SDG) Target 12.3, which calls for halving food waste at retail and consumer levels as a means to achieve the SDGs. Thus, research may be prioritised in these areas, said Swannell.

“What the Food Waste Index shows is that the amount of household food waste per capita is broadly similar across high-income and middle-income countries,” he added. “In nearly every country that has measured household food waste, it was substantial, regardless of the income level of that country. This suggests that consumer food waste has been previously underestimated, and as a result potentially under-prioritised.”

Meanwhile, he expressed concern that while there was a drop in food waste during the pandemic in the UK, food waste figures could increase again.

“Being confined to our homes has resulted in an increase in behaviours such as batch cooking and meal planning, which help tackle food waste,” he told IPS, citing WRAP’s research on the UK’s eating patterns during the lockdown. “As a result people are saying they waste a lot less food during lockdown.”

There are also concerns about the impact of food waste on climate change.

“Reducing food waste would cut greenhouse gas emissions, slow the destruction of nature through land conversion and pollution, enhance the availability of food and thus reduce hunger and save money at a time of global recession,” she said.

Swannell said few people were aware of this link.

“Public awareness of the impact food waste has on climate change is less common than other environmental factors,” he told IPS.

He cited WRAP research, specifically on the UK population, that showed while 81 percent of the population are concerned about the climate crisis, only a third of the people are aware of a clear link between climate change and food waste.