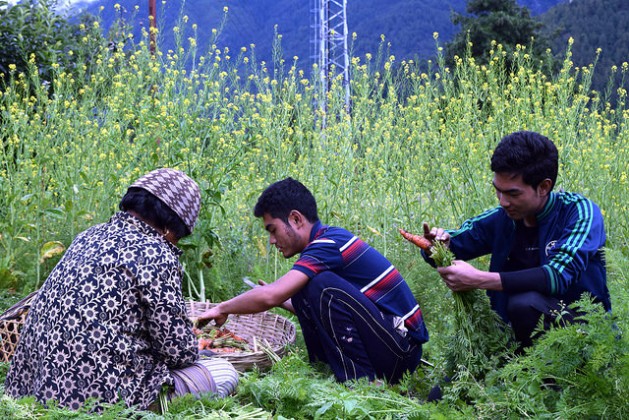 Tsering Dorji works on his farm in western Bhutan’s Satsam village. Due to inadequate transportation and marketing opportunities, he loses half of what he produces every rainy season. Credit: Stella Paul/IPS

COPENHAGEN, Jun 8 2016 (IPS) - Four years ago, 27-year-old Tsering Dorji of western Bhutan’s Satsam village took to organic vegetable farming. Since then, thanks to composted manure and organic pesticide, the soil health of his farm has improved, and the yield has increased manifold.

Dorji, once a subsistence farmer, now has about 60 bags of surplus food every two months to sell and earn a profit.  But come the rainy season and he still loses thousands of rupees carrying his produce to markets that are miles away.

“Vegetables like radish, carrot and cucumber often break and tomatoes get squashed when I transport them. So I have to either sell them for [the deeply discounted price of ] 5-10 rupees a kg or just throw them away. This is very a hard time for me,” Dorji told IPS.

The young farmer is not alone. The world over, but especially in developing countries, farmers lose millions of dollars due to food loss. According to the United Nations’ Food and Agriculture Organisation (FAO), the total bill for food loss and food waste is a whooping 940 billion dollars a year.

The scenario could, however, change significantly in coming years courtesy of a new global mechanism called the Food Loss and Waste Accounting and Reporting Standard. Launched at the 4th Global Green Growth Forum (3GF) a two-day conference held in Copenhagen from June 6-7, this is a protocol to map the extent and the reasons for food loss and food waste across the world.

The conference, which brought together governments, investors, corporations, NGOs and research organisations, termed it a great ‘breakthrough” – one that could lead to effective control and prevention of global food loss and food waste.

“The new Food Loss and Waste Standard will reduce economic losses for the consumer and the food industry, alleviate the pressure on natural resources and contribute to realising the ambitious goals set out in the SDGs, “said Christian Jensen, Minister for Foreign Affairs, Denmark, launching the protocol. 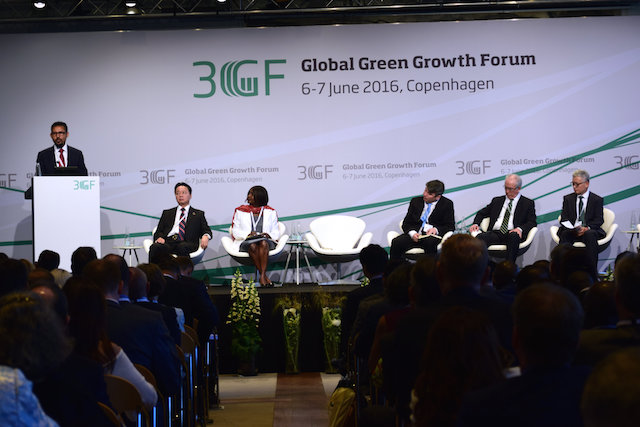 The Global Green Growth Forum, a two-day conference in Copenhagen June 6-7, 2016, on attaining green growth in business, in alignment with the SDGs. Credit: Stella Paul/IPS

The Food Loss and Waste Accounting and Reporting Standard (FLW) has been developed jointly by the Consumer Goods Forum, the FAO, the United Nations Environment Programme (UNEP), the World Business Council for Sustainable Development (WBCSD), and the World Resources Institute (WRI).

Specific guidelines for how the standard will instruct countries and companies to measure their food waste are still being drafted, but the protocol includes three components.

Secondly, the standard includes diverse quantification options, which will allow a country or company with fewer financial or technical resources to obtain a general picture of their food loss and waste.

And finally, the standard is meant to be flexible enough to evolve over time, as understanding of food waste, quantification methods, and available data improves.

Food loss and waste has significant economic, social, and environmental consequences. According to the FAO, a third of the food produced in the world is lost while transporting it from where it is produced to where it is eaten, even as 800 million people remain malnourished.

In short, food loss increases hunger. The lost and wasted food also consumes about one quarter of all water used by agriculture and, in terms of land use, uses cropland area the size of China, besides generating about 8 percent of global greenhouse gas emissions.

Target 12.3 of the UN Sustainable Development Goals (SDGs) addresses this he global food challenge by seeking to halve per capita food waste and reduce food losses by 2030.

The FLW Protocol can help steer the movement forward, say UN officials. According to Achim Steiner, the executive director of the United Nations Environment Program (UNEP), the protocol could not only help understand just how much food is “not making it to our mouths, but will help set a baseline for action”.

The protocol has also triggered the interest of business leaders like the world’s largest food company, Nestle. “What gets measured can be managed. At Nestle, we will definitely benefit significantly by using the standard to help us address our own food loss and waste,” said Michiel Kernkamp, Nestle Nordic Market chief.

But can the FLW protocol benefit the smallest and the poorest of the food producers in the developing countries who lack modern technology, innovation, and regular finance and are surrounded by multiple climate vulnerabilities such as flood, drought, salinity and other natural disasters?

The protocol, by identifying the pockets of food loss, can highlight the areas that need urgent intervention, he says.

“For ordinary proof producers, food loss happens for a number of reasons such as lack of innovative tools, improved seeds, market opportunity and climate change. The new protocol can be a tool to find out how much losses are happening due to each of these reasons. Once this data is collected, it can be shared with the NGOs and the business communities. Accordingly, they can decide how and where they want to intervene and what solutions they want to apply.”

Bomba, however, cautions that the protocol should not be mistaken for a solution. “This protocol in itself cannot end food loss. It is just a tool to understand the problem better and find the appropriate solution.”