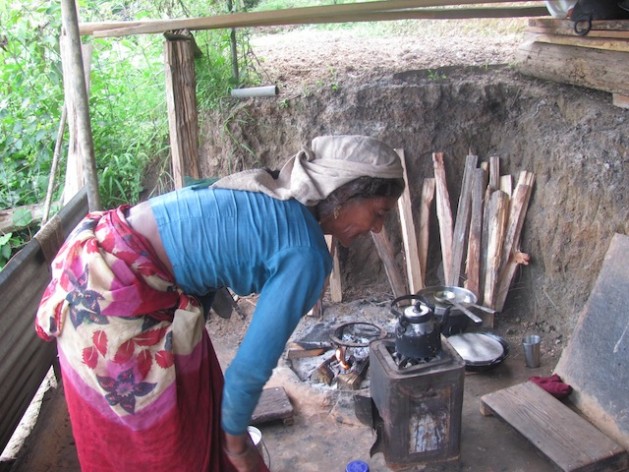 Indian woman bends over her wood-burning stove in her home in northern India. Credit: Athar Parzaiv/IPS

But this ignores an important reality: millions of women already participate as producers of energy – specifically of bioenergy for poor households.  To support sustainable development and gender goals, more attention needs to be given to these women energy producers who have remained largely invisible in much of the energy discourse.

Women account for only 22% of the jobs in the oil and gas industry and only 32% in the renewables sector.  When it comes to managerial and other decision-making positions, the share of women is even lower; for example, their representation in energy company boardrooms is less than 5%.

About 2.5 billion people globally rely for cooking on the traditional use of solid biomass, notably fuelwood, charcoal and dung.  This figure includes 680 million people in India and 800 million throughout Sub-Saharan Africa

In response, several programs have been launched to increase women’s participation in the energy sector. These programs are succeeding in raising awareness about the need for more women in the sector, building networks to support women practitioners, and giving visibility to the women already working in energy – albeit with a focus on the formal, professionalized segments that constitute the energy industry.

But this focus on addressing underrepresentation in the formal segments of the sector – a very important effort — can generate the misperception that women are in fact not active in producing the world’s energy. Many assume their role is largely limited to consuming energy (e.g., at home, at work, or for leisure), not supplying it.  And therein lies an overlooked reality: millions of women worldwide are producers of biomass, a form of bioenergy.

About 2.5 billion people globally rely for cooking on the traditional use of solid biomass, notably fuelwood, charcoal and dung.  This figure includes 680 million people in India and 800 million throughout Sub-Saharan Africa.

Biomass is also used by the poor for other purposes, such as heating homes in colder regions.  In many lower-income countries, biomass can constitute over 90 percent of the energy that poor households use.  It is provided through small-scale commercial ventures, but much is also generated by households for their own use.

Around the developing world, women play a central role in producing this bioenergy, notably by gathering wood and making charcoal. In fact, this is a segment of the energy sector where women are often overrepresented.

As the World Bank reported last year, “across most of Sub-Saharan Arica and in parts of China, women are the primary fuel wood collectors,” which is also the case in areas of South Asia. This is time-consuming and physically demanding work that can involve “collecting and carrying loads of wood that weigh as much as 25-50 kilogrammes” and can “take up to 20 or more hours per week.”  Unfortunately, we lack hard data about the number of women engaged in this energy production.

Biomass has already been receiving attention in development circles because of the problems associated with its use in traditional cookstoves, such as negative health impacts on notably the women who cook and the burdens of collecting firewood.

To address this issue, the United Nations has adopted as one of its Sustainable Development Goals the replacement of traditional biomass use with clean cooking technologies. This targeting of biomass and its harmful impacts does not, however, negate the role its women producers play in the energy sector (just as the climate and environmental concerns surrounding coal do not erase the role of miners).

Several actions can help to make these women producers more visible in the energy discourse.

First, recognizing the role they play in energy supply can help to shift the notion and perception of dependency: women actively participate in the production, not just the use, of household energy.

Failing to understand women’s contribution to global energy production will continue to perpetuate the myth of women as mainly (dependent) energy users, which can hamper efforts to ensure their full participation in decision-making and leadership roles within all levels of society.

Second, there is a paucity of data regarding these women producers – a situation that reflects the lack of attention they receive and also contributes to their lack of visibility.

How many women work in producing biomass (generally as unpaid labor)? How many women will be affected by changes in biomass production systems?  What will they do in a changed world?  This type of information can help address their needs and to plan for their engagement in the energy transition.  We need more data.

Third, it is important to acknowledge and properly value this work in producing household bioenergy, and to report it in energy workforce statistics. When a company produces electricity for its own use, it is called a “self-producer.”

When a woman produces biomass for use in her home, it all too often goes nameless.  The recognition of this women’s labor would also help in the effort to “achieve gender equality and empower all women and girls,” the UN’s fifth Sustainable Development Goal.

Fourth, in developing programs and initiatives to shift households from traditional biomass use to clean cooking technologies, it is important not only to consider the effect on women as consumers, but also address the impact on women as energy producers to ensure that their needs are being met.

Moreover, because these efforts to shift how households use biomass will also affect greenhouse gas emissions, the topic has entered the climate discourse. As world leaders discuss how to limit climate change at the upcoming summit convened by US President Biden or thereafter at the international COP negotiations, it is important to ensure that the situation of these women producers — their voices, concerns, and aspirations — are adequately taken into account when planning the clean energy transition (just as the concerns of coal miners and others are also considered).

Acknowledging the central role that millions of women play in producing the world’s bioenergy can lead to a greater empowerment of women across the sector.

As efforts to boost the participation of women in energy mature, it will be important to better recognize and analyze the contributions of these women producers, and to design policies that will help improve their standards of living, including as part of the clean energy transition.

Jully Meriño Carela is the director of the Women in Energy program at Columbia University’s Center on Global Energy Policy.

The views expressed are those of the authors in their personal capacities.