The writer is Spokesperson and Head of Communications at Unitaid*, hosted by the World Health Organization (WHO)

The WHO says Malaria is a life-threatening disease caused by parasites that are transmitted to people through the bites of infected female Anopheles mosquitoes. It is preventable and curable. WHO recommends protection for all people at risk of malaria with effective malaria vector control. Two forms of vector control – insecticide-treated mosquito nets and indoor residual spraying – are effective in a wide range of circumstances. 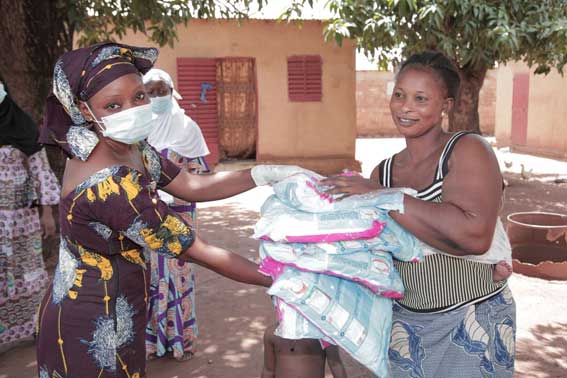 Distribution of mosquito nets in Kadiolo, region of Sikasso, Mali June 2020. Credit: PSI, A US based NGO. The UN commemorates World Malaria Day on Sunday April 25.

GENEVA, Apr 23 2021 (IPS) - Despite its 229 million cases and 409,000 deaths in 2019, malaria is an overlooked epidemic. The emergence of COVID-19 has thrown health systems into disarray and forced countries to shift their focus from malaria to the pandemic response, threatening to reverse 20 years of malaria gains.

Now, as we enter the second year of the pandemic, the global response to COVID-19 must not come at the expense of progress against malaria, a preventable and treatable disease. Not only is eliminating malaria possible, but it is also crucial to fighting current and future diseases.

It is vital that the international community remembers that eliminating malaria remains an achievable goal for all countries. Indeed, more countries than ever are either achieving or approaching elimination.

In 2017, as part of the “E-2020 initiative”, the World Health Organization (WHO) identified 21 countries that could defeat malaria by 2020. Spread across five regions of the world, these countries share the ambitious goal of achieving zero indigenous cases of malaria by 2020.

Ridding the world of malaria is a central component of achieving the Sustainable Development Goals (SDGs), linking closely to targets on poverty, inequality, and health and well-being. But as long as it persists, malaria will continue to have a devastating impact on the most vulnerable communities.

Innovation plays a vital role in the elimination of this disease. New tools, such as those being developed by Unitaid and partners, are needed in the face of emerging insecticide and drug resistance. These can only be developed with sustained and significant investment in malaria research.

Hervé Verhoosel. during aa press briefing at the UN in Geneva

Global investments to end malaria have an enormous return on investment. In 2018, they saved 600,000 lives and prevented close to 100 million malaria cases compared to 2000 levels.

In the Asia-Pacific region, weighing against the epidemiological and economic costs of inaction, Wellcome Trust researchers estimated that eliminating malaria by 2030 could save over 400,000 lives, prevent 123 million malaria cases, and lead to a 6:1 return on investment.

These investments also strengthen health systems that are vital to responding to threats such as COVID-19, and help address other vector-borne diseases.

Together with partners, global health agency Unitaid has been supporting the evaluation of the performance of new bed nets under real conditions in malaria-endemic countries to guide policy on their use.

This aims to open a market for these new nets and bring about competition among manufacturers, leading to lower prices and a sustainable tool for countries.

Unitaid also invests to accelerate access to next-generation insecticides to reestablish indoor spraying as a malaria-control measure, and to vary new spray formulas to prevent mosquito populations from growing resistant to them.

Unitaid’s work has also resulted in the delivery of seasonal malaria chemoprevention to over six million children across seven countries in the Sahel, fulfilling more than 25% of the region’s need, while monitoring the safety, efficacy, cost, and public health impact of such programmes at scale.

This World Malaria Day, the global health community must reaffirm its commitment to combat malaria by increasing global investments to prevent, control, and ultimately eliminate this disease. COVID-19 has exposed the weaknesses in health systems around the world. Now is the moment to step up efforts against this preventable disease.

About Unitaid
*Unitaid is a global health agency engaged in finding innovative solutions to prevent, diagnose, and treat diseases more quickly, cheaply, and effectively, in low- and middle-income countries. Our work includes funding initiatives to address major diseases such as HIV/AIDS, malaria, and tuberculosis, as well as HIV co-infections and co-morbidities such as cervical cancer and hepatitis C, and cross-cutting areas, such as fever management.

Unitaid is now applying its expertise to address challenges in advancing new therapies and diagnostics for the COVID-19 pandemic, serving as a key member of the Access to COVID Tools Accelerator. Unitaid is hosted by the World Health Organization.