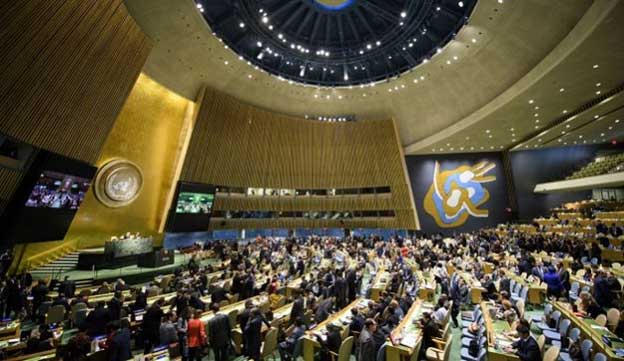 The 193-member General Assembly, the highest policy making body at the UN, is described as a political non-entity playing only a subservient role to the Security Council in the election of Secretaries-Generals over the last 76 years. “If I am a Member of the General Assembly, the biggest UN organ that prides itself on one-country, one-vote policy, I will be insulted,” says the head of a coalition of NGOs. Credit: UN Photo/Manuel Elias

UNITED NATIONS, May 10 2021 (IPS) - As negotiations for the upcoming election—or re-election– of a UN Secretary-General gather momentum, one undeniable fact looms heavily over the final decision: the choice of a UN chief is the intellectual birthright of the five big permanent members (P5) of the Security Council, namely, the US, UK, France, China and Russia.

All others, including the General Assembly (GA) and civil society organizations (CSOs), remain bit players in the political drama currently unfolding in a world body which has remained locked down, since March 2020, due to the Covid-19 pandemic.

The 193-member GA, the UN’s highest policy making body, remains and will continue to remain a political non-entity playing only a subservient role to the Security Council.

The rules are cast in stone: the secretary-general shall be appointed by the GA upon the recommendation of the Security Council

Perhaps the GA’s only task is to rubber-stamp the decision made by the big powers—as it has sheepishly done over the last 76 years—even though it has the right, and the overwhelming votes, to reject any of the candidates nominated by the Security Council.

But so far it has not.

Meanwhile, how effective or ineffective is the campaign, mostly by CSOs and women’s rights activists, for the UN’s first woman Secretary-General?

With no public support from any of the P5 countries, the gender-empowered demand for a female UN chief may eventually be a good try in a lost cause.

Despite the UN’s campaign for gender empowerment, both globally, and also inside the world body, the UN has so far elected only four women -– in contrast to 71 men–- as Presidents of the General Assembly in the last 76 years, while it has never had a female secretary-general in the history of the Organization.

Mavic Cabrera-Balleza, Founder & Chief Executive Officer of the Global Network of Women Peacebuilders (GNWP), a coalition of over 100 women’s rights organizations from more than 40 countries worldwide, told IPS a true UN reform should address the continued dominance of the P5 in selecting the Secretary-General.

“This is the 21st century. I thought colonialism is over. If I am a member of the General Assembly, the biggest UN organ that prides itself on one-country, one-vote policy, I will be insulted,” she said.

Meanwhile, the authors of a 1996 landmark study on UN Reforms – Brian Urquhart and Erskine Childers, both senior UN officials – said the selection of the Secretary-General is quite literally part of a male-oriented “old-boy network.”

Titled “A World in Need of Leadership: Tomorrow’s United Nations”, the report, co-sponsored by the Ford Foundation and the Dag Hammarskjold Foundation, called for “a standard policy of non-renewable terms of office, and a single seven-year term” both for the Secretary-General and for all executive heads throughout the UN system.

But that never got off the ground.

As things stand, the current incumbent Antonio Guterres is heading for a second term—unless he antagonizes either one of the P5, even if it is at the 59th minute of the eleventh hour.

In a distant past, the UN chief who had a running battle with the US – Boutros Boutros-Ghali of Egypt – was the only secretary-general who was denied a second term even though he garnered 14 of the 15 votes in the Security Council, with the US exercising its veto against him.

Arora Akanksha, a UNDP staffer and a self-nominated candidate challenging Guterres, says: “The UN preaches democracy to the world but can’t organise a competitive election in its own backyard. It’s a hypocritical sham”.

“The absence of any women, people of colour, or young people from the race should set alarm bells ringing for anyone who cares about democracy, justice, or equality.”

But hers may be a voice in the wilderness because not a single P5 country has indicated its willingness to support her candidature—at least as of now.

She also does not have the sponsorship of either India or Canada, her motherland and her country of adoption respectively.

Asked about her current status in relation to the upcoming elections, Akanksha said, “I have reached out to all 193 member states. I have met with five countries so far. Countries are fearful of nominating me because of retaliation from members of the Security Council and the European Union.”

The other candidate apparently is Rosalia Arteaga, a former President of Ecuador, who is being officially supported by her home country, but prefers to be a candidate of CSOs, according to a report in PassBlue, a nonprofit, independent, women-led media site popular within the UN community.

Anwarul K. Chowdhury, former UN Under-Secretary-General and one-time Ambassador of Bangladesh to the UN, told IPS it is interesting to find that this year’s election for the Secretary-General is getting all the attention for the candidacy of individuals who are showing interest in the post.

Among them, the media – both social and traditional – outreach of Ms. Arora Akanksha seems quite wide ranging. “I am in full support of her campaign focus on a woman to be the next Secretary-General, as I have been advocating for years”.

But the point about the absence of “people of colour” is not factual as we know that out of nine SGs, five were non-white, said Ambassador Chowdhury, who was President of the UN Security Council in June 2001, and who led the process for a second term for Secretary-General Kofi Annan of Ghana (1997-2006)

“Also, I am sure Ms. Akanksha understands that when she says “The UN preaches democracy to the world …”, the functioning of the Organization is not democratic as the UN’s founders included in the Charter of the UN creation of the five permanent members of the Security Council whose positions finally decides the election of the Secretary-General.”

The basic point that she makes in her recent press release is that her “…candidacy is legally valid under the rules established by the UN in 2015” according to UN General Assembly resolution 61/321.

“The main focus and assertion of that resolution is that only Member States of the UN are invited to nominate candidates. I believe amongst Ms. Akanksha’s 200 policy experts, there would be people to know that and would have advised her correctly”.

To attain some credibility for her candidature, Ms. Akanksha should make efforts to obtain the agreement of a Member State to submit her name as a candidate. She had reportedly said earlier that “It was a positive discussion … I’m still waiting to hear what Canada’s position would be,” he noted.

“That would give her candidacy a much-needed credibility and elevate it to a formal one in accordance with the existing decision of the General Assembly. Without that, her pronouncements in her vision statement would remain hollow and merely a listing of areas and issues of concern which have been raised by many over the years”, declared Ambassador Chowdhury.

Saber Azam, former UN official and author of two books on Afghanistan and Liberia https://www.saberazam.com.told IPS the UN is at a very critical moment in its history. There is a need for profound reform.

“The President of the General Assembly cannot and should not ignore the candidacy of Ms. Arora Akanksha or anyone else who comes forward.”

Times have changed since the inception of the United Nations 76 years ago, he said, and the world has new realities. Decision-making powers must ensure that the process is transparent, inclusive, gender-balanced, and geographically fair. “The UN welcomes female candidates for all positions; why not the SG’s?”, he asked.

Sanam Naraghi-Anderlini, founder and CEO of the International Civil Society Action Network (ICAN) told IPS this is one of the most difficult and important jobs in the world.

“It requires wisdom, political savvy, experience and a depth of humanity – a quality that is often undervalued.”

Given the UN is 76 years old as an institution, having difficulty to pull itself into the 21st century, there has been an urgent need for an SG that has vision, imagination, empathy for the marginalized and the energy needed to shift course and renovate the culture and practices of the system, she argued.

“At the very least, it would be good to see a job description setting out the criteria for eligibility. It would also be good to see the institution’s power brokers -– notably the member states – uphold the existing rules”.

For example, she pointed out, if the retirement age for UN staff is 65, shouldn’t the same rule apply to its senior leadership and special envoys? Instead, it seems that a different set of rules come into play above the 37th floor.

If the UN advocates principles of good governance, including transparency, should it not practice these principles in its own home? she asked.

“If the system is serious about gender equality and equal opportunity, should it not give female candidates a genuinely fair shot, and finally, if the UN is our chance of shaping a better future for future generations, why not consider having a younger person at the helm – one who has a genuine stake in the future, and who is at least among the world’s 87% of the population that is below the age of 65?” she added.

But none of these factors are being considered. Instead, there will be a little flurry from NGOs and women’s organizations, and a handful of brave alternative candidates, but in reality, the die is cast. Business as usual will prevail to the detriment of the original values and vision that led to the creation of the UN 76 years ago, she declared.

Explaining the process, Ambassador Chowdhury said: the position of Secretary-General is one of great importance that requires the highest standards of efficiency, competence and integrity, and a firm commitment to the purposes and principles of the Charter of the United Nations.

Cabrera-Balleza said “I also find it problematic that civil society continues to remain on the sidelines in this selection process. How many General Assembly and Security Council resolutions have sung praises to the critical role of civil society in implementing the mandates of the UN?”, she asked.

“That’s why I commend and strongly support various efforts of fellow civil society actors to demand transparency and inclusion in the selection of the Secretary-General, such as the “Campaign to Elect a Woman Secretary-General” (WomanSG campaign) 1 for 7 Billion, and #Forward”.

Thalif Deen, Senior Editor at the UN Bureau of Inter Press Service (IPS) news agency, is the author of a newly-released book on the United Nations titled “No Comment and Don’t Quote Me on That” available on Amazon. The link to Amazon via the author’s website follows: https://www.rodericgrigson.com/no-comment-by-thalif-deen/