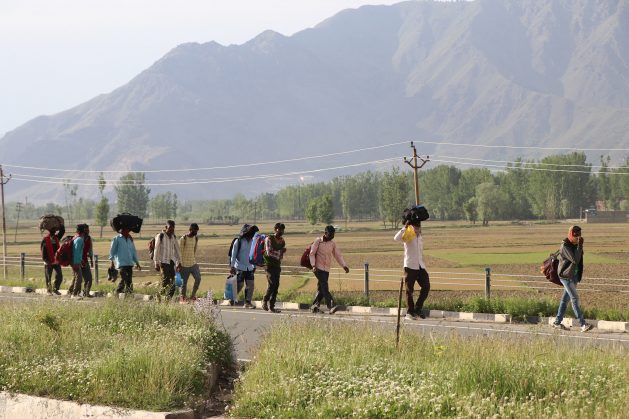 Migrant labourers wait in queues in Kashmir in order to travel back to their homes. The second wave of COVID-19 in India has seen masses of people leave cities and towns to return to their rural homes. Credit: Umer Asif/IPS

NEW DEHLI, May 25 2021 (IPS) - Last month, in the midst of New Delhi’s coronavirus lockdown, 37- year-old labourer Prakash Kumar wanted to return to his rural home in India’s northern state of Uttar Pradesh. But instead of travelling the usual few hours by bus, Kumar had to journey for three days.

“The firm [where I worked] was closed down and there was no work left in the city. The government had kept the busses and trains operational and that is why we decided to leave,” Kumar told IPS.

But at the main bus terminal he saw a sea of migrant workers jostling in queues to board busses that could take them back home.

Kumar ended up having to wait 24 hours to purchase a ticket.  “Due to the huge rush, I had to go by some other route which was [costly] and lengthy. I had to walk also for many miles,” he said.

The second COVID-19 wave has hit India hard. On May 5, the World Health Organisation (WHO) said that India accounted for 46 percent of all new COVID-19 cases recorded worldwide and one in four of deaths. The highest daily average was on May 9 when over 400,000 new cases were recorded. Currently India has recorded just over 245,000 daily infections.

The total number of cases in the Indian capital stands at 1,42 million along with just over 1,37 million total recoveries and over 23,000 deaths since the pandemic’s outbreak.

On Apr. 19, in order to prevent the spread of the disease, the government imposed a lockdown in the capital. Construction activities, private firms, schools, colleges, offices, cinemas, bars and restaurants were all shut. The shutdown continues to remain in force. But with the lockdown and high infection rates in the Indian capital, migrant workers have been leaving the city in droves.

Darshana Kumari is one of them. Kumari worked as a maid in the Indian capital for over a year. However, with the resurgence of COVID-19 and the subsequent lockdown, the mother of two decided to leave the city and return to her home in Uttar Pradesh.

“My employer has asked me not to come to work anymore. Also I am worried about my children. My elder son is just 12 years old. I fear to even imagine that if anything happens to me here, what will happen to my kids,” Kumari told IPS.

She said heading back home was her only option to save herself and her children from the “dangerous disease.”

Hailing from country’s rural belt, migrant labourers amount to some 40 million people, according to government estimates. They come to the cities and towns to earn a livelihood by working in menial jobs in privately-owned firms and factories. But the various states of lockdown across the country has meant that many migrant workers have become unemployed.

In a recent report, CIME said that the unemployment rate increased from 6.5 percent in March to 7.97 percent in April.

“While this massive tragedy is comparable only to the mass migrations during the partition of the Indian sub-continent when British left India in 1947, the added element this time is also the plight of migrant workers, risking their lives along with livelihood,” Ram Punyani, an imminent Indian writer and civil society activist, wrote recently.

Migrant worker Siraj Alam waits to board a bus in India’s Srinagar City to return to his hometown in Bihar. The closure of factories due to COVID-19 has forced millions of labourers like him to leave the cities and return to their rural homes. Credit: Umer Asif/IPS

Suresh Kumar Yadav, 29, who had worked as a daily wage labourer in a cement factory in Delhi was waiting for a bus to take him to his village in northern Uttar Pradesh. His two-year-old child and his wife sat near to the bus stop, anxiously waiting to get out of the city as soon as possible.

“Last year, it was March when the first lockdown due to COVID-19 was imposed and we were told to go home. We came back here in September, hoping that we may now be able to earn without any anxiety but the present situation looks more frightening than that of the last year,” Yadav told IPS.

When the lockdown in Delhi was imposed, he and of the other workers at the factory were paid off and told that their services will no longer be required. Yadav went to his rented apartment dismayed and dejected. He paid the rent and asked his wife to pack their bags once again.  “I used to earn 10,000 rupees ($150) a month here. As I am going back to the village, I don’t know what would I do, what would I earn?” Yadav said.

Reports show that after the Apr. 19 lockdown in Delhi, more than 80,000 migrant workers returned to their homes.

Geeta Aiyar, a social activist based in Delhi, said the displacement of migrant workers in India was wreaking havoc on their livelihoods.

“They had all hopes that they may get some respite this year but the pandemic is showing its disastrous side and its direct impact is being felt by the poor migrant labourers in the country. There are many who have become infected and died. The hospitals are already overburdened and the shortage of oxygen is actually killing more people than those [dying] due to the virus itself. Therefore, these poor souls have no option but to flee the city with whatever little resources they have,” Geeta told IPS.

Bijay Kumar, who works as an electrician in a private firm in Delhi, was walking with 10 other men towards the railway station where he hoped to catch a train to return to his rural home.

The 35-year-old had been working to repay the bank loan he had taken out last year to pay for his wedding. But the COVID-19 pandemic shattered all his dreams and hopes of becoming a debt-free man.

“The interest on the loan is only increasing every month. With the second wave of COVID-19, everything has been shut and from this month onwards, I wouldn’t get any salary as the factory has been closed. I really have no idea what will happen to my family,” Kumar, whose wife is seven months pregnant and suffering from various health issues, told IPS.

Dr Naveed Iqbal, a New Delhi-based virologist, told IPS that the government needed to streamline the exodus of migrant workers from cities and towns as they could be carriers of the deadly virus and could spread the disease in rural areas.

“As these workers board busses and trains to reach to their villages, they could be potential carriers of the virus. The government needs to order their quarantine for at least 14 days at the borders of their states and allow them to proceed only after completion of the quarantine period. This way we can help in stopping the flow of virus to the rural parts of the country where the health care system is much more dismal than of the main cities,” Iqbal said.