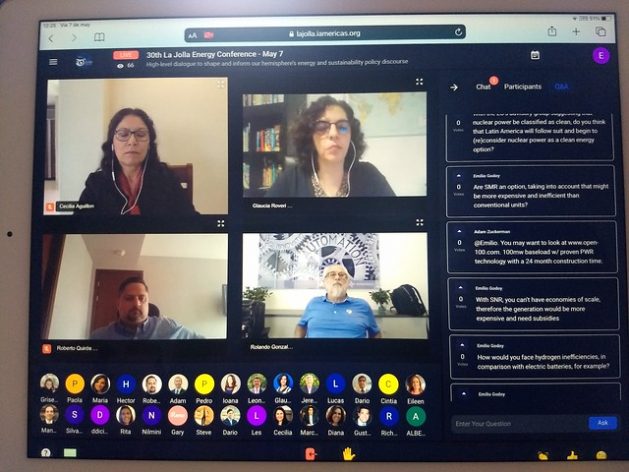 MEXICO CITY, May 7 2021 (IPS) - Several Latin American countries are stepping up the pace to generate hydrogen for various uses in transportation and industry, but they must first resolve several questions.

Jorge Rivera, Panama’s national secretary (minister) of energy, said his country is building a market and the technology, with the support of the Inter-American Development Bank (IDB) to make hydrogen available.

“Panama is ready for that. We are working to develop the preliminary rules to participate in that market. In the short term, we see ourselves as a hydrogen hub for Latin America. We think we can play a role in building that hub,” he explained during his telematics participation.

In the short term, Rivera pointed out, the Central American country’s plan “more than producing, is to be a hub for storing and distributing hydrogen,” based on the existing logistics for storing hydrocarbons and the operation of the Panama Canal.

The “gray” hydrogen comes from gas and depends on the adaptation of gas pipelines for its transportation. In comparison, “blue” has the same origin, but plants capture the carbon dioxide (CO2) generated.

Production is based on steam methane reforming, which involves mixing the first gas with the second and heating it to obtain synthesis gas, but it yields CO2.

The production of “green” hydrogen uses electrolysis, whereby hydrogen is separated from oxygen using electrical energy as a separator. The gas reacts with air, generates electricity and releases steam. Electrolysis also makes it possible to recombine the two elements to form water and thus conceive fluid.

Green hydrogen has been added to the pool of clean sources to drive the energy transition away from fossil fuels and thus develop a low-carbon economy. Some countries also see it as a tool to generate foreign exchange and support recovery from the covid-19 pandemic.

In addition to hydrogen, the conference will also address topics such as the future of transportation, including its electrification; the outlook for gas in South America; energy cooperation between the United States and Mexico; as well as the future of hydrocarbons and the financing of the post-covid economic recovery.

For his part, Gabriel Prudencio, director of the Sustainable Energy Division of Chile’s Ministry of Mines and Energy, said that his country is in the early stages of seeking growth in a few years.

“Hydrogen is going to be important in the future, because it is already in use in several industries. We see that hydrogen will be used in transportation, as a gas to produce heat in industrial processes or domestic use,” he described.

Prudencio explained that “considering all this, Chile has a great potential to be an important player because of the renewable potential. We could produce the cheapest hydrogen in the world and use it in local development and export it to international markets”.

Chile already has a national hydrogen strategy, which aims to produce the cheapest green hydrogen on the planet by 2030, be among the top three exporters by 2040 and have five gigawatts of electrolysis capacity under development by 2025.

In addition, it has already drawn up an agenda of legal changes to promote this alternative.

In addition, the country has a US$15 million fund to support three pilot projects and a cooperation agreement with Singapore.

Uruguay is also interested in developing this resource to decarbonize its activities.

The Uruguayan Minister of Industry, Energy and Mining, Omar Paganini, said at the La Jolla Conference that “we are working to create conditions for the development of the market. We prepared the roadmap for hydrogen and developed a national strategy”.

The South American nation is executing a pilot project to replace diesel with hydrogen in heavy transport. In addition, the IDB is financing the analysis of gas use in other activities such as the production of green fertilizers.

Argentina also wants its slice of the hydrogen pie in the energy transition.

Santiago Sacerdote, general manager of YPF Tecnología, a subsidiary of state-owned oil company YPF, said the country has “extraordinary resources to develop those resources, such as ammonium, hydrogen and in other forms.”

“We can export low-carbon energy. We are going to see significant progress in the coming months,” said the executive director of Argentina’s H2Ar Consortium.

In that nation there is already a consortium of 40 companies and a public-private roundtable. It is also designing a new regulatory framework.

Argentina is focused on building an export platform, the collaborative partnership, a plan to execute pilot projects in several applications, create a domestic market and build the local supply chain.

Historically, Brazil was one of the pioneers in hydrogen analysis, but focused on biofuels and renewables. Now the country wants to catch up.

“We discussed energy transition strategies, including hydrogen. Brazil can be an exporter of green hydrogen. We thought about how to design that approach. We see export potential, but it is not the most competitive technology yet,” explained Agnes da Costa, director of the Special Advisory Committee on Regulatory Affairs at Brazil’s Ministry of Mines and Energy.

The Hydrogen Council, a global alliance of 13 major energy, industrial and transportation companies, sponsored the study “The Road to Hydrogen Competitiveness. A Cost Perspective,” launched in January 2020, which reviews 40 technologies used in 35 applications, such as commercial vehicles, trains, heaters and industrial conditioning.

In 22 of these, the costs incurred by a user over the lifetime of the application of one of these technologies will be comparable with other low-carbon alternatives by 2030.

One of the looming challenges is the infrastructure needed for gas storage and transportation.

Panama’s Rivera acknowledged that the big issue is the cost of electrolysis infrastructure and electricity generation, but predicted that “we can take advantage of falling prices in the future”.

In turn, the Chilean Prudencio indicated that infrastructure is needed locally and for export. “Many projects will be built at the consumption site, such as mining companies”, he exemplified.

The Uruguayan Paganini minimized the distances to be covered. “Long-term contracts are necessary and for that we need production and export schemes,” he suggested.

For the Argentine Sacerdote, the existing gas network can be a support for the market to take off. “We have to consolidate this market and create incentives, and establish strategic relationships with important buyers, such as Japan,” he said.

Finally, the Brazilian da Costa foreshadowed that when there are rules and market, investment will flow. ”

“But we are not there yet. It’s time to see if the new rules for the electric and gas sectors can include hydrogen. One of the pillars is technology neutrality, so that the market is all-inclusive,” he said.