Daud Khan, Ahmed Raza and Mahnoor Malik speak to a young immigrant in Italy about his journey to Europe

ROME, May 11 2021 (IPS) - We met 22-year old Ali B. in a park in Rome’s city center on a rather cold and windy April evening. We could not share a meal, or even a coffee, as all restaurants were shut due to continuing COVID-19 restrictions. He had travelled down from Cerveteri (a small town about 50km north of Rome) where he works for an old couple. They provide boarding and lodging as well as a decent salary and social security benefits. In return, he has to cook for them and look after the kitchen. 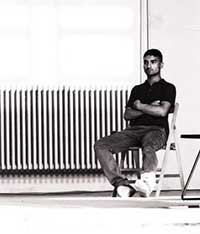 Ali’s calm demeanor belies the arduous life he has lived. From losing a parent early in life to migrating to Italy at the tender age of sixteen, he has experienced serious hardships. Admirably, he has not let these experiences deter his ambition. When not at work, Ali spends time studying – he is keen to complete a high school diploma. He also contributes part of his time to writing a book about his experiences.

We decided to tell Ali’s story not only because it is moving but also inspirational. Most importantly, he embodies a spirit of independence and of courage for taking destiny in his own hands – making the most of whatever life has given him. He is also an example for Pakistani migrants in Italy. In the few years he has been here, he has shown what one can achieve by opening up to a new culture.

Given that Ali arrived in Italy at an impressionable age, he easily assimilated to the Italian way of life. Unlike many of his compatriots from Pakistan, his language skills and comfort with the Italian norms and customs has helped in integrating with locals and their culture. Talk of Pakistan, his life there or its culture does not invoke any strong nostalgia in him. Rather it reminds him of economic hardships and the life-threatening journey he embarked on a few years ago.

We asked him what the journey to Europe was like.

He told us that the journey started on a bus from his hometown close to Sheikhupura to Lahore, and then by train to Karachi. There, he met up with others and a group of 40 young men and boys was put on a small launch which took them to Iran. From there they travelled on foot, or by car and bus, to Turkey and eventually to Greece. At each leg, the group got larger or smaller as others joined or left – depending on the logistics of the next stage.

The journey to Greece took about three to four weeks and over this period he had about 10 handlers. Luckily for Ali, the handlers, many of whom were Iranians, were a generally humane lot. The travelers were usually provided food, a clean place to sleep and reasonable facilities. Most important, they were not mistreated in any significant way, as happens often on the human trafficking routes through North Africa where depravation, as well as physical and sexual violence are common.

We asked him why he chose Italy once he entered the European Union.

He said that upon arriving in Greece, he stayed in a camp managed by the United Nations High Commission for Refugees for over a month. At that time Angela Merkel’s government was making arrangements to allow groups of Syrian refugees to enter Germany. Ali and four other Pakistanis decided to mingle with the Syrians and found themselves on a bus headed to Austria. In Vienna, they were given train tickets to Germany.

The Pakistani boys realized that sooner or later the German authorities would find out that they were not Syrians and they would face an uncertain future. One of them managed to contact a cousin who was an agricultural laborer near Rome. Based on this short call, Ali and his small group decided that they were better off separating from the Syrians. Not having any money, they had to travel without tickets. Quite predictably they got caught by the railway staff and thrown off the train several times before they eventually ended up in Rome.

The “cousin” picked up the four of them and took them to Latina, an important hub for the production of fruits and vegetables for the Rome market. Many Pakistanis, often without any papers, work in the fields there. But Ali was only 16, a “minor” and generally even unscrupulous employers are hesitant to take them on. The next morning, Ali was put on a bus and advised to contact the police, inform them that he was a minor and ask for help.

So here was this 16 year old boy, cold, hungry, reduced to below 50 kilos, with long unkempt hair at Rome’s central railway station. No money, nor a word of Italian – and no documents except a birth certificate (janam pathrii).

We asked him what was the most frightening thing about this journey.

“In Iran we travelled for one night and a day in the boot of a car. I was with another rather big person. It was not only very uncomfortable but also frightening being in the dark for so many hours. Another time, Iranian police chased us and our handlers dumped us in an apple orchard and told us to hide among the trees. The Iranian apples are very nice, and we stuffed our stomachs and pockets.”

“But the really hair-raising part of the journey was when we had to cross a high mountain pass from Iran into Turkey. We joined a number of other small groups and were 40 people, including women, children and old people. The crossing was at night. It was very cold and the paths were icy and treacherous. I recall that a few people fell off the path and given the conditions, it was unlikely that they were rescued. I was terrified of falling off and being left behind.”

His recount is overwhelming and makes us wonder why a teenager from a relatively sound socio-economic background would dare to take such a plunge. So, we ask him what led him to leave home?

He revealed that hostile environments within the household coupled with limited economic prospects in his hometown drove him towards Europe.

“My mother passed away when I was thirteen. My father was preoccupied with managing his small plot of land and five buffaloes and had little time for me and my siblings. He remarried and I was sent to live with my paternal uncle. It was a hard and lonely time.”

“I did not get much schooling and never had time or energy to play with other children, or even to watch TV or listen to the radio. Next came a job in a local factory that manufactured parts for tractors. In addition to the factory work, I had to continue to look after my uncle’s small dairy enterprise. It was an unexciting and dull life and I was always tired.” He does not delve into more details. It is clear that this was a challenging period in his life.

Now in 2021, there is nothing dull or unexciting about Ali. He has friends from all over the globe, some of whom he met in learning centers funded by the government and international NGOs. He owns a smartphone, maintains a healthy social media presence and even runs a small business online selling silk-screened T-shirts.

We asked him when he did make the decision to leave.

“Working all the time, I knew nothing of a wider world. The decision to leave was made for me. One of my uncles, not the one I was staying with, but another one who often traveled and moved around with city folk, suggested we sell my late mother’s jewelry to finance my trip to Europe – I recall hearing we paid about Rs3-4 lakhs (about US$3-4,000 at the time). And so I was given a little case with a few clothes and some cash (I think it was about Rs5-10,000), and was sent off to Karachi. It was the last time I saw my home, my neighborhood or my relatives.”

We asked him what were the most important factors behind integration in Italy.

“The most important factor is language – we must learn Italian,” he said. “I was given the chance to learn in a center called Civico Zero in Rome. It is funded by Save the Children. They also helped me register for the various courses which helped me get a job. With language and a job, I have a chance to build a life for myself.”

We asked him if there was anyone who was instrumental in making him who he was today.

“Many people were kind to me. There were many people from NGOs working in various shelters – their dedication to helping me was incredible. There was a family in Rome who used to come by and take me out on weekends and buy me ice-cream. There were several Pakistanis, some were second generation and others who were here for a long time, who helped me realize how lucky I was to be in Italy and the importance of integration. All these people showed me more love and kindness than I got from my family. Now I have friends from all over the world, many of whom I met in shelters and while doing various courses. I am lucky.”

We asked him what were the activities and things he enjoyed the most.

“When I was at CivicoZero, I discovered theatre. I wrote and performed a 45-minute solo piece on my trip from Pakistan. I had no idea what theatre was or that anyone would be interested in what I had to say. I was wonderful. That was what made me start on my book – I want people to know my story.”

“Also it is nice in the countryside where I live, but I want to move back to Rome or another big city. There is so much to do in a city and so easy to meet people which I really enjoy.”

The writers are Pakistanis who work and live in Rome. This is the second in a series of articles on Pakistanis in Italy