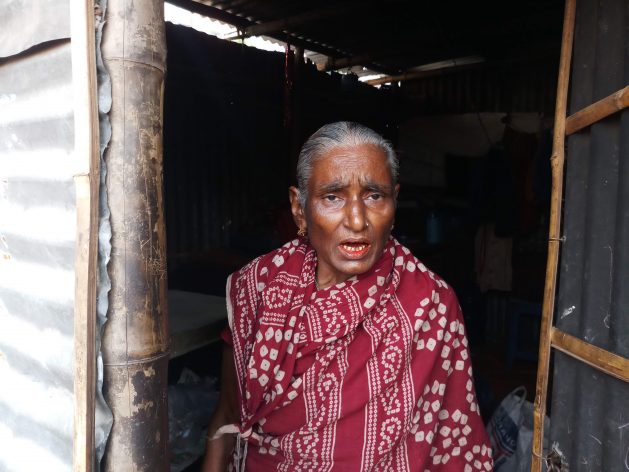 A domestic worker in her house in the Dhaka’s Malibagh slum. She no longer has work because of the COVID-19 pandemic. Courtesy: Rafiqul Islam

DHAKA, Jun 30 2021 (IPS) - Rani Akter, a mother of five, usually works as a domestic helper in Dhaka’s Zikatola area. When the coronavirus pandemic broke out in Bangladesh last March, her employers asked her not to come to their homes for fear of infection.

“I lost my work in three houses one after the other, which became a nightmare for me. My rich employers did not allow me in their homes as they thought that I might carry the invisible virus,” Akter told IPS.

Akter’s husband also lost his job because of the COVID-19 lockdown and the family fell on hard times.

“We had nowhere to go. Once we had a home in Mehendiganj in the coastal Barishal district, but riverbank erosion engulfed our home eight years ago. That’s why we were compelled to stay in the city,” she said.

“We did not find government relief or cash assistance. But we had to survive and that’s why at first we were bearing family expenses from our savings. And when the savings were spent, we started borrowing from our relatives. We’ve already borrowed Tk 40,000 ($ 471). We are taking Tk 5,000 to 6,000 ($ 58 to $ 70) in loans per month from neighbours and relatives to meet our food demand and pay rent,” Akter said.

She said her family was running into debt and she did not know when their suffering would end.

Shahana Akter (20), a single mother who works as a domestic helper in Netrakona town, also lost her work when the pandemic started. But she was more fortunate that most.

“When I lost my work, I thought how my five-year-old son and I would survive. I had no savings. But I was lucky enough as I got a new work after two months of the lockdown,” Shahana Akter told IPS.

Millions of domestic workers lost their jobs because of COVID-19

There is no official data on the number of domestic workers in Bangladesh. But according to Rezaul Haque, additional secretary (Labour Wing) of Bangladesh’s Labour and Employment Ministry, around 95 percent of domestic helpers are women and girls.

A 2006 International Labour Organisation (ILO) study estimated that Bangladesh had four million domestic workers in a country with a population of 163 million.

While a recent study by the National Domestic Women Workers Union (NDWWU) showed there are about 2.2 to 2.5 million domestic workers, of which about 60 percent or 1.5 million were live-out workers with the remaining 40 percent living their employer’s homes.

According to NDWWU general secretary Murshida Akter Nahar, when the coronavirus outbreak began here in March 2020, many domestic workers lost their jobs without notice and without being paid the wages owed to them.

It is estimated that around 1.2 million live-out workers lost their jobs since March 2020.

“And many domestic helpers were forced out of their employers’ houses, so they had to suffer a miserable life during the lockdown last year. They had no shelter to live and no food to eat in Dhaka city. That was why many of them were compelled to leave the city,” she told IPS.

Once the COVID-19 infection rate reduced, many domestic workers returned to the city, hoping to be re-employed by their former employers. But most did not get their jobs back.

Nahar said those domestic helpers who had been able to find employment, lost their jobs when the coronavirus situation started deteriorating once again this March. “But they did not get enough support from the government.”

She said many domestic workers started begging, resulting a rapid rise of beggars on the city streets.

Mahmuda Begum (40) lives in a small rented house in the city’s Zikatola area and she had also worked in the area as a domestic helper. When the pandemic began she lost her job overnight.

“I lost my only livelihood option due to COVID-19. I spent all the savings that I had. Now I have no money to pay house rent (Taka 5,000 per month or $58) or buy food and other essential goods. That’s why I had no option but to borrow money at high interest,” Begum told IPS.

Begum, a widow and mother of two, said she did not pay her rent for four months and her family often have to starve for lack of food. “We cannot eat meals three times in a day,” she added. Shahana Akter (20), a single mother and domestic worker in Netrakona town, also lost her work when the pandemic started. She was able to find employment again. Credit: Rafiqul Islam/IPS

Domestic work is an unregulated sector

Domestic Workers Rights Network coordinator Abul Hossain said: “At the onset of the lockdown enforced in Bangladesh, the domestic workers faced a lot of suffering. About 30 percent of them, who lost work, were compelled to return to their villages and those who were in the city did not have any work. A majority of them did not get any government support.”

He said that many were now in a difficult situation as they could not pay rent and were trapped in debt. He said this also resulted in a rapid rise in family feuds.

Hossain, also a trade union leader, said it was impossible to currently ensure the rights of domestic workers and suggested bringing them under a legal framework to establish their rights.

Haque, additional secretary (Labour Wing) of the Labour and Employment Ministry, said the government distributed cash assistance and relief among the unemployed by preparing their lists. He said that there was no specific social protection scheme for domestic workers as they worked in the informal sector.

Haque said that if the proposed Domestic Workers Protection and Welfare Policy Act was passed, the rights of domestic workers could be established.

“Talks continue with stakeholders concerned to formulate a law to ensure the rights of domestic workers,” Haque said.

This feature was made possible by a donation from Farida Sultana Foundation, Dhaka, Bangladesh. Farida Sultana passed away in December 2020 after battling COVID-19 for two weeks.