Inclusivity Is My Key to Success

ROME, Jun 9 2021 (IPS) - In three cycles I spent all together more than 15 years in Rome, at the Permanent Representation of Hungary to the Food and Agriculture Organization of the UN (FAO) and between my last two assignments in Rome my responsibilities in Budapest included FAO related issues. This made it possible for me to witness the development of this organization under the leadership of four Directors-General. Edouard Saouma, Jacques Diouf, Jose Graziano da Silva and Qu Dongyu. This long association and “historic” view of FAO would definitely help me in fulfilling the role of the Independent Chairperson of the Council of FAO (ICC). As conventional wisdom suggests, in order to make good decisions for the future we need to know, understand and learn from the past. The Independent External Evaluation, commissioned by the FAO Council in 2004, was an important milestone in this regard. It was followed by inclusive discussions among FAO Members about the recommendations and finally an Immediate Plan of Action was adopted by the FAO Conference. It was the most significant reform in FAO and I had the privilege to contribute to this process. 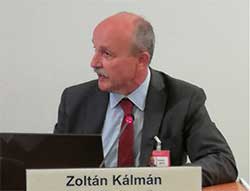 Inclusivity is the key for successful accomplishment of the tasks of ICC. This requires real, meaningful consultations both among the Membership and with the Management. I believe the practice of inclusive consultations and dialogues taking place at the World Food Programme could be considered as a good example. I had the honour to be Member of the WFP Executive Board between 2015-2020; served as Vice-President in 2017 and elected President of the Board in 2018. The inclusive, transparent and efficient working methods of the WFP EB are greatly appreciated generally by the Membership. No need to simply “copy and paste” the WFP model, but some of these working methods could be successfully applied at FAO as well, including the disciplined time-management, which could be achieved through inclusive preparatory consultations and jointly established rules.

According to my vision the position of Independent Chair implies certain authority and power, and I think this should be used for improving the efficiency and effectiveness of the FAO Council. But in my interpretation the role of ICC is first and foremost a SERVICE. This service includes representing Members’ interests and assisting Membership to better exercise their functions, guiding discussions and building consensus. I have no hidden agenda to push for any particular interests of countries, regions or lobby groups. I cannot claim that I am a candidate of the EU, although many EU countries support my candidacy. Similarly, I am not a candidate of the European Region or the OECD, although I count on significant support from these groups of countries. I am simply a candidate from Hungary, but I would be Independent Chair of all FAO Members, representing the interests of all of them, independently, irrespective of the size, geographic location, political orientation, economic model or level of development of the countries. Transparency, independence, neutrality and impartiality are not just nice sounding words to me. I take these principles seriously as I did when I was President of the WFP EB. As a retiree, I would be qualified to accomplish the duties and tasks of ICC in a fully independent manner, in line with the spirit of the recommendations of the Independent External Evaluation (IEE).

Inclusivity means that I listen to all Members both at official meetings and informal discussions, with my door always open. Inclusivity would require efforts for a more active involvement of all countries while better engaging even those with small missions and limited capacities. Inclusivity also means full respect for multilingualism and due attention to the specificities of countries and regions.

In the past few decades I participated in many meetings, sometimes making tough discussions and I always have been constructive, finding solutions and reaching consensus through dialogues. I am grateful for the opportunity to learn a lot during my assignments in Rome and I am strongly motivated to make the best possible use of my past experience, for the benefit of FAO. Originally it was not my personal career ambition to become ICC. Rather, the most important motivating factor for me was the inspiration and encouragement of Permanent Representative colleagues from all regions, particularly from developing countries. In fact, a number of colleagues and friends from various regions approached me and encouraged me to consider applying, based on my background and experience, including as successful President of the WFP EB. This inspired me immensely and I am grateful for all the encouragement and also for the significant support to my election bid already received from many countries from all regions.

The priority areas to be discussed at FAO Council are included in FAOs Programme of Work and Budget, Medium Term Plan or Strategic Framework. I only wish to highlight 2 very important challenges ahead of us. First, food security for all, particularly in countries seriously affected by the COVID pandemic. Second, sustainable agriculture and food systems, with due attention to all 3 dimensions of sustainability. Naturally, the Independent Chair can have his own programme priorities, but these are discussed among the Memberships of all FAO governing bodies and a decision is taken by consensus. All these issues are also discussed with the FAO DG and the Management, with clear and distinct roles and responsibilities. FAO Members, through the governing bodies, can provide strategic policy guidance to the Management regarding the principles and priority areas to be followed, in line with the SDGs. The technical details on HOW to implement the programmes, remains to the highly professional Management and Staff of FAO. The overall management of FAO is the responsibility of the Director General of FAO. With the new leadership style of DG Qu Dongyu we are confident that he will continue to introduce positive changes, appreciating and motivating the staff, who are the greatest assets of this important Organization. He will definitely continue the tradition of listening to the views of the FAO Membership and respecting the guidance provided by the governing bodies. This will help him in his efforts to make FAO more efficient and effective, contributing to achieving Zero Hunger.