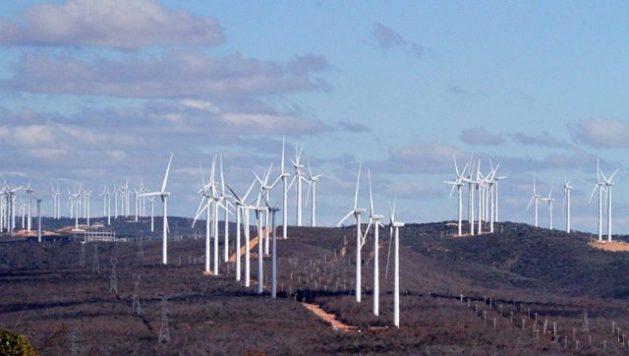 View of a wind farm in the interior of Bahia, a state in Brazil's Northeast region where wind power already provides most of the local electricity and was critical in some years between 2012 and 2018 when severe drought reduced the generation capacity of hydroelectric plants. CREDIT: FP/Fotos Publicas

RÍO DE JANEIRO, Jul 5 2021 (IPS) - Twenty years after the blackout that prompted nine months of rationing to keep the power grid from collapsing, Brazil may see a repeat of the traumatic situation, this time with a more obvious climate change undertone.

Scarce rainfall in the October to April rainy season in south-central Brazil reduced to critical levels the flow in the Paraná river basin, whose 57 dams account for more than half of the country’s hydropower.

One example: the reservoir of the Furnas hydroelectric power plant, one of the biggest in the country, in the central state of Minas Gerais, had only 29.7 percent of its useful volume at the end of June. Too little to last until the return of abundant rains in October or November, a common situation in Brazil’s southeast and midwest regions.

Droughts have been recurring more frequently in these regions since 2001, and they have hit electricity generation hard. In 2014 and 2015 the southern metropolis of São Paulo had to ration its water supply, faced with the depletion of its water sources.

Brasilia also had to do so in 2017 and 2018. And Curitiba, capital of the southern state of Paraná, experienced the same problem throughout 2020.

The current water crisis, considered the worst in 91 years of measurements, has caused a “delayed perception” of global warming in the Brazilian electricity sector, acknowledged the general director of the national grid operator (ONS), Luiz Carlos Ciocchi, in a Jun. 26 interview with the newspaper O Globo.

"Just the possibility of rationing in a country with our energy potential is a disgrace." -- Joilson Costa

The climate crisis is accentuating the vulnerability of Brazil’s electric system, which is highly dependent on rainfall, since hydropower plants are the main source. But drought “is not the only factor in the current emergency,” said Ricardo Baitelo, project coordinator of the non-governmental Energy and Environment Institute.

“There was a lack of planning, the expansion of the system was not foreseen. If the COVID-19 pandemic hadn’t happened, we would probably already have blackouts,” he said. Without the reduction in demand caused by the health emergency, “the hydrological bottleneck would have happened sooner,” he told IPS by telephone from São Paulo.

There are also management problems in the face of the growing complexity of the electricity system, said Baitelo, an engineer with a PhD in energy planning and a visiting professor at the University of São Paulo. 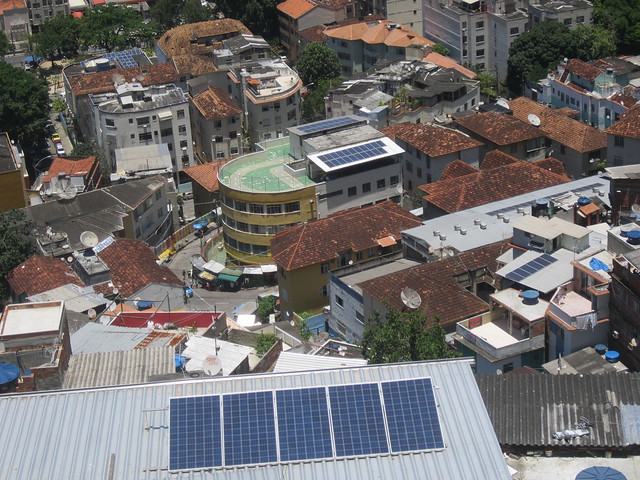 Schools, stores and associations generate their own electricity by means of solar panels on their rooftops in Morro de Santa Marta, a favela or shantytown located in the traditional neighbourhood of Botafogo, in Rio de Janeiro. CREDIT: Mario Osava/IPS

The 2001 crisis led to the construction of many fossil fuel-powered thermoelectric plants to ensure supply, at the cost of high pollution and steep prices. They are the plants that, fully activated, will make it possible to overcome the current drought, without blackouts and without rationing, according to the energy authorities.

In addition, more transmission lines were built to transfer energy between the country’s regions to cover shortages where water is scarce.

The cost increase will be passed on to consumers.

The National Electric Energy Agency (Aneel), the sector’s regulatory body, increased to 1.90 dollars the additional tariff for each 100 kilowatt-hours of consumption, created in 2015 to balance the difference in costs of thermoelectric generation.

The minister of mines and energy, Admiral Bento Albuquerque, recommended that companies and the public save on water and electricity, to boost energy security and to lower the electricity bill by easing the pressure on the electric system.

In Brazil, water and electricity are closely intertwined, since hydroelectricity still accounts for 58.3 percent of the country’s installed generating capacity. 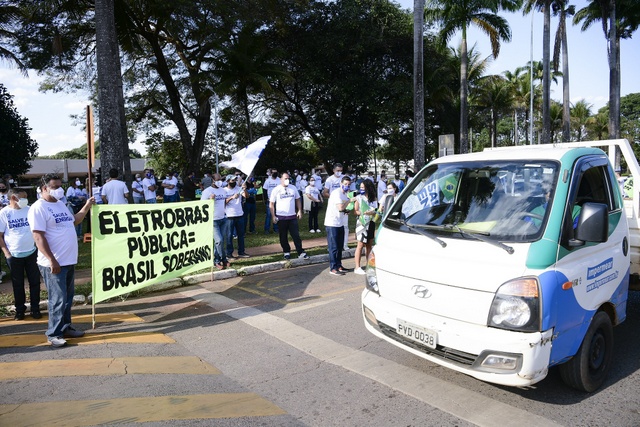 “Public Eletrobras = Sovereign Brazil” reads a banner at a protest in Brasilia against the privatisation of Brazil’s largest electric company. Its privatisation, as approved by Congress, includes projects for natural gas-fired thermoelectric power plants which, according to experts, will lead to further hikes in the price of electricity for consumers. CREDIT: Pedro França/Agência Senado- Fotos Públicas

That is why the government of Jair Bolsonaro temporarily concentrated decisions on water management in reservoirs in the hands of the minister. The use of water to produce energy has been given higher priority. For that reason, less water will be released from dams, to the detriment of agricultural irrigation, navigation, tourism and environmental functions.

But the electricity sector became more complex as the generation of power from other sources grew.

In the past, hydrology was practically the only factor to be considered, since rivers provided almost 90 percent of the country’s electricity. Then fossil fuel-fired thermoelectric plants began to be built, which now represent 25 percent of the energy mix.

The so-called “hydrothermal” model, managed without great difficulty, was then overtaken by the accelerated growth of “flexible sources,” especially wind power, which has already reached 10 percent of installed capacity, and solar power, which accounts for only 1.9 percent but is expanding faster.

But diversifying sources and expanding the participation of new renewables “is the way forward” and also requires expanding and adjusting the transmission line network to the dispersion of generating plants, in order to overcome the lack of coordination that reduces the efficiency of the system, said Baitelo. 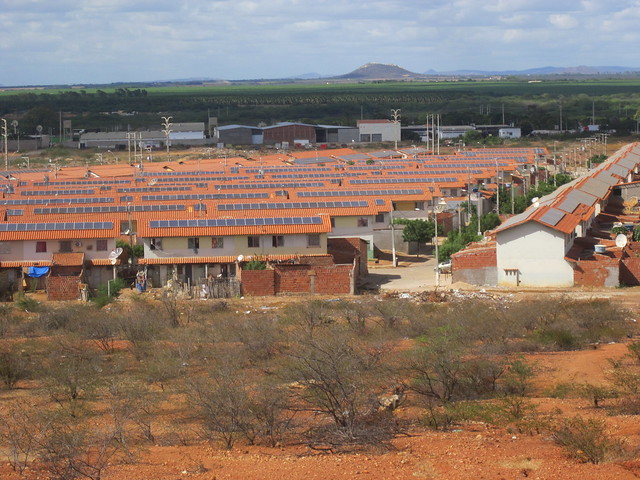 View of a low-income housing complex where 1,000 families settled on the outskirts of Juazeiro, a city in the state of Bahia, with solar panels on their roofs. The income generated by the electricity benefited its residents for three years, but it was suspended for not complying with Brazil’s rigid rules for distributed generation. CREDIT: Mario Osava/IPS

“Wind, solar and biomass energy are part of the solution, they reduce greenhouse gas emissions and curb Brazil’s vulnerability to climate change effects, such as drought,” he stressed.

Because they are quick to install, they are also better suited to the accelerated expansion of generation capacity that will likely be needed to meet post-pandemic demand, he added.

Questions about the unpredictability of wind energy, due to its intermittency, are not a stumbling block, he said. The meteorological knowledge acquired and the technological advances made make “the winds predictable,” as the Brazilian Wind Energy Association, which represents companies in the sector, says.

But Brazil must also focus on energy efficiency, the fight against waste. The 2001 crisis encouraged several measures, such as rational consumption and replacement of light bulbs and household appliances, Baitelo said. But, he added, these unfortunately were not maintained.

Joilson Costa, coordinator of the Front for a New Energy Policy for Brazil, made up of 31 social organisations, believes that the government will do everything possible to avoid the political wear and tear of energy rationing.

“Just the possibility of rationing in a country with our energy potential is a disgrace,” he told IPS by telephone from São Luis, capital of the northeastern state of Maranhão.

“The big disaster is that once again the price of electricity will rise, as always happens, with frequency, in this country,” said the engineer.

“Diversifying the energy mix, with the increase of renewable sources, is necessary but not sufficient,” he argued. “The rates must be reviewed, because they do not reflect operational costs or the reality in Brazil, in order to cut the cost of electricity.”