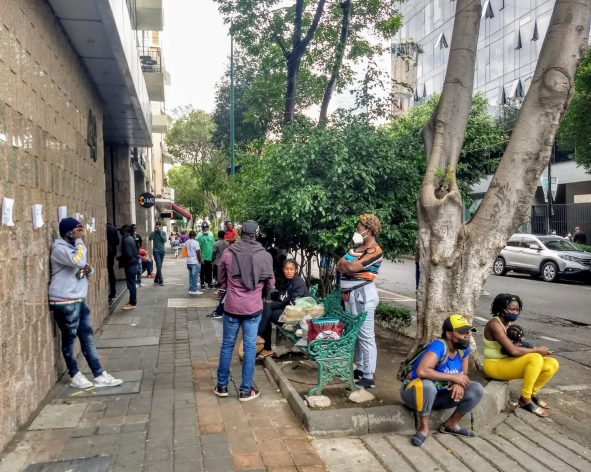 Every day, dozens of migrants from Central America, Haiti and Venezuela come early in the morning to the offices of the governmental Mexican Commission for Refugee Aid in downtown Mexico City to apply for asylum. Mexico is overwhelmed by the influx of migrants, to whom it has begun to apply harsh restrictions. CREDIT: Emilio Godoy/IPS

MEXICO CITY, Oct 27 2021 (IPS) - In September, 31-year-old Yesenia decided to leave her home on the outskirts of the northern Honduran city of San Pedro Sula, driven out by violence and the lack of water.

“The maras (gangs) were threatening me, and it hadn’t rained, there was very little water. I had to leave, I had to go somewhere, anywhere. I want to stay wherever they let me,” the mother of a seven-year-old girl, who was a homemaker in one of the most violent cities in the world, told IPS.

It was the first time she had left her country. She reached the southern Mexican state of Chiapas (bordering Guatemala), and continued on by bus and hitchhiking. “We slept in the bushes, walked, went hungry, got rained on and sometimes froze,” she said, describing the journey she made with her daughter.

Yesenia, who is short and dark-haired with a round face, now lives in an area that she does not name for security reasons, and is applying for refugee status in the capital of Mexico, a country that has historically been a huge source of migrants to the United States as well as a transit route for people from other countries heading there as well. It has also become, over the last decade, a growing recipient of undocumented migrants.

Due to the large number of requests for asylum, which has stretched Mexico’s immigration and refugee system to the limit, it takes a long time for cases to be resolved. Although immigration advocacy organisations provide assistance in the form of money, food, lodging and clothing, these resources are limited and the aid eventually comes to an end.

Driven out by poverty, lack of basic services, violence and climate-related phenomena, millions of people leave their countries in Central America every year, heading mainly to the United States, to find work and to reunite with family.

But in the face of the increasing crackdown on immigration in the U.S. since 2016 under the administrations of Donald Trump (2016-January 2021) and current President Joe Biden, many undocumented migrants have opted to stay in places that were previously only transit points, such as Mexico.

The problem is that Mexico also tightened the screws, as part of the role it agreed with the U.S. to perform during the times of Trump, who successfully pressured the governments of Enrique Peña Nieto (2012-December 2018) and current President Andrés Manuel López Obrador to step up their own anti-immigration measures. And this has not changed since Biden took office.

Like the rest of Latin America and the Caribbean, Mexico and the so-called Northern Triangle of Central America (Guatemala, Honduras and El Salvador) are highly vulnerable to the effects of the climate crisis. Drought and devastating hurricanes drive people from their homes to safer areas or across borders in search of better lives.

Honduras is one illustration of this phenomenon. Since 1970, more than 30 major tropical storms have hit the country, leaving a trail of deaths and billions of dollars in property damage. Hurricanes Eta and Iota struck in 2020. For this year, the World Meteorological Organisation (WMO) predicted 17 hurricanes on the Atlantic side before the official end of hurricane season on Nov. 30.

Caribbean island nations such as Haiti are also suffering from the climate emergency. The country was hit by Hurricane Elsa in June and by Tropical Storm Fred and Hurricane Grace in August, on top of an Aug. 14 earthquake measuring 7.2 on the Richter scale that claimed thousands of lives.

In 2017, a particularly lethal year, hurricanes Harvey and Irma struck Haiti. As a result, Sadaam decided to leave, heading first to Chile that year and now to Mexico, where he has applied for humanitarian asylum.

“Things got very difficult. The hardware store where I worked had to close because of the rains and I couldn’t work. I can do any kind of job and that’s all I ask for: work,” the 30-year-old Haitian migrant told IPS.

Tall and lean, Sadaam, originally from Port-au-Prince, also arrived in Mexico in September, with his wife and his son, as well as his brother and sister-in-law and their daughter. They are living temporarily in a hotel, with support from humanitarian organisations. 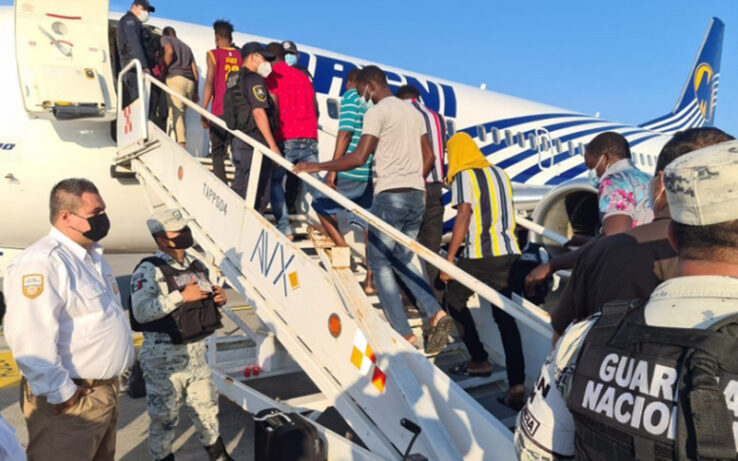 On Oct. 6, the Mexican government deported 129 Haitians to Port-au-Prince on a chartered flight from Tapachula, a city in the southern state of Chiapas. The measure was criticised by social organisations, while the U.N. called for an evaluation of the need for protection of Haitians and the risks of returning them to their country. CREDIT: INM

Recent studies and migration statistics show that the paths followed by migrants and climate disasters in the region are intertwined.

Between 2000 and 2019, Cuba, Mexico and Haiti were the hardest hit, by a total of 110 storms which caused 39 billion dollars in damage, affected 29 million people and left 5,000 dead, 85 percent of them in Haiti, according to the United Nations Office for the Coordination of Humanitarian Affairs.

In 2020, internal and external displacement due to disasters soared in El Salvador, Guatemala, Haiti and Honduras. But the international migratory framework has not yet accepted the official category of climate refugee, despite growing clamor for its inclusion.

Armelle Gouritin, an academic at the Latin American Faculty of Social Sciences-Mexico, told IPS that the scientific community has linked the sudden events to the climate emergency, whose influence on internal and external migration flows is growing.

“There is evidence that they are increasing. It is quite difficult to say to what extent the volume of migration is growing, because there is little quantitative data. It is hard to compare. It tends to be invisible, especially because of slow onset processes such as drought and desertification,” she explained.

In her 2021 book “The protection of internal climate migrants; a pending task in Mexico”, the expert described scenarios linked to migration, such as gradual-onset phenomena, sudden-onset disasters (hurricanes or violence generated by water shortages), relocations decided by the authorities, sea level rise and the impact of renewable energy megaprojects.

As Mexico has become a magnet for migration, measures against immigration have been stiffened. This year, through August alone, immigration authorities detained 148,903 people, almost twice as many as in all of 2020, when the total was 82,379.

The Haitian influx was triggered after the United States announced in August that it would halt deportations of those already in the country because of the earthquake, which drew thousands of Haitians who were in Brazil and Chile, where they had migrated earlier and where policies against them had been tightened.

In Mexico, according to official figures refugee applications increased from 70,406 in all of 2019 to 90,314 this year up to and including September, of which 26,007 were filed by Haitian migrants. Migrants from Honduras, Haiti, Cuba, El Salvador, and Venezuela account for the largest number of applications.

Despite the large rise in applications, Mexico only approved 13,100 permanent refugees in September: 5,755 from Honduras, 1,454 from El Salvador, 733 from Haiti and 524 from Guatemala. 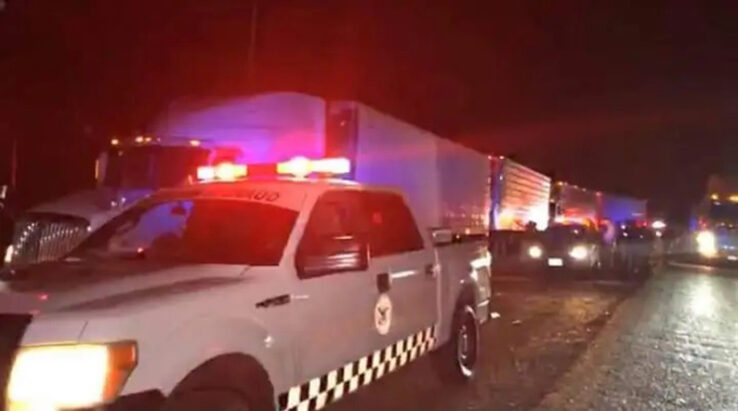 On the night of Oct. 7, a military checkpoint found 800 migrants from Central America in three truck trailers on a highway in the state of Tamaulipas in northeastern Mexico, bordering the United States, where they were headed. CREDIT: Elefante Blanco/Pie de Página

The World Bank study “Groundswell: Acting on Internal Climate Migration” warns that Mexico must prepare for the confluence of climate disasters and migration flows, and projects 86 million internal climate migrants in the world by 2050, including 17 million in Latin America.

The report, published on Sept. 13, estimates that the number of climate migrants will grow between 2020 and 2050, when between 1.4 and 2.1 million people will migrate in Mexico and Central America. Mexico’s central valley, where the capital city is located, and the western highlands of Guatemala will receive migrants, while people will flee arid, agricultural and low-lying coastal areas.

Although several international bodies link migration and the climate crisis, the concept of climate migrant or refugee does not exist in the international legal framework.

Gouritin understands the international reluctance to address the issue. “There are three narratives for mobility: responsibility, security and human rights. States are not willing to head towards the responsibility narrative. The security narrative predominates, we have seen it with the caravans from Central America (on the way to the United States through Mexico),” she said.

Few countries are prepared to address the climate dimension of migration, as is the case of Mexico. The general laws on Climate Change, of 2012, and on Forced Internal Displacement, of 2020, mention climate impacts but do not include measures or define people internally displaced by climate phenomena.

In the United States, undocumented Mexicans are experiencing the same thing, as deportations of Mexicans could well exceed the levels of all of 2020, since 184,402 people were deported that year compared to 148,584 as of last August alone.

Yesenia and Sadaam are two migrants who are suffering the statistics in the flesh, as victims of their own governments and the Mexican response.

“I’ll stay wherever I can get a job to support and educate my daughter,” said Yesenia. With refugee status, migrants can work freely.

Sadaam said: “I was offered a job as a cleaner in a hotel, but they asked me for a refugee card. The government told me that I have to wait for the call for the appointment. If I get a job, I will stay here.”

But above and beyond the detentions, deportations and refugee applications, migration will continue, as long as droughts, floods and storms devastate their places of origin.