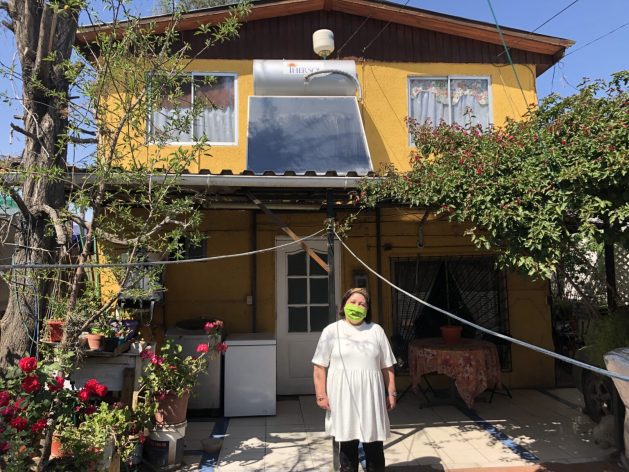 Schoolteacher Marta Pérez stands in front of her house near the solar thermo panel that has allowed her and her family to enjoy hot water again, because the high cost of electricity made it unaffordable in the past. There are a total of 70 beneficiaries of the solar water heater project in the town of Renca, to the north of Santiago, Chile. CREDIT: Orlando Milesi/IPS

SANTIAGO, Oct 29 2021 (IPS) - More than 90 percent of Chile’s 17.5 million people have access to electricity. But many live in energy poverty because they do not have access to hot water, have unsafe connections, houses without thermal insulation and with indoor pollution, or can’t afford to pay the monthly bill.

This description came from Nicola Borregaard, who holds a PhD in natural resource economics and is manager of EBP Chile, a sustainability consultancy in the field of energy, water resources and climate change. The consultancy takes on projects that range from strategic to concrete initiatives that reflect what is happening around the country.

She explained in an interview with IPS that the consultancy applies financial engineering to address the needs and requirements with alliances and connections through networks with different actors, in order to make the projects viable.

In Chile “we are very close to reaching 100 percent access to electricity. This does not always mean that people have access 24 hours a day, seven days a week. Many have intermittent access that lasts a couple of hours, with interruptions,” she said.

For Borregaard, energy poverty is a multifaceted issue and is not only overcome by having access to electricity.

“More than 10 percent of the population does not have access to hot water. And there is no electrical safety…. in many homes there is a risk of electrocution and fire due to poor installations,” she said.

“The other kind of energy poverty is the inability to afford to pay the bill which often is huge, with as much as 20 percent of a family’s income going towards electricity and gas,” she added.

The picture is completed “with indoor pollution because many people heat with coal, wood or kerosene in very small spaces and this contributes to respiratory diseases.”

Marta Pérez, a 50-year-old primary school teacher, lives with her parents in the low-income Nueva Victoria neighbourhood in the municipality of Renca, on the northern outskirts of Santiago, some 22 kilometres from the city.

“I had health problems. We have an electric water heater, but because the bills were so high we disconnected it….but because the water was so cold I got pneumonia. I got really sick. That was until last year when they installed a solar thermal panel in my house. Since December I have been using hot water to bathe,” she told IPS at her home.

Her family used to pay 125 dollars a month on their electricity bill, but now they pay 75 dollars a month. In Renca, the project installed 40 solar systems consisting of a solar panel and a tank that holds 80 litres of hot water.

Each beneficiary family paid approximately 250 dollars for the installation and received the thermo panel – which costs 1,125 dollars – as a donation.

A total of 70 households made up of 292 people received five types of energy improvements aimed at energy efficient homes. In addition to the thermo panels, other families received refrigeration and thermal insulation systems for their homes.

“I wish that all of Chile could have access to a solar thermo panel, and that they could become widespread for showers and basic needs. It is the energy of the future and takes advantage of what we have most: sunlight,” said Pérez.

“And I hope they soon install solar panels on the rooftops because it cuts down the electric bill and harnesses the sun’s energy for power. We must use sources such as wind, geothermal and solar energy. That would be a present with a vision for the future of humanity,” said the kindergarten teacher. 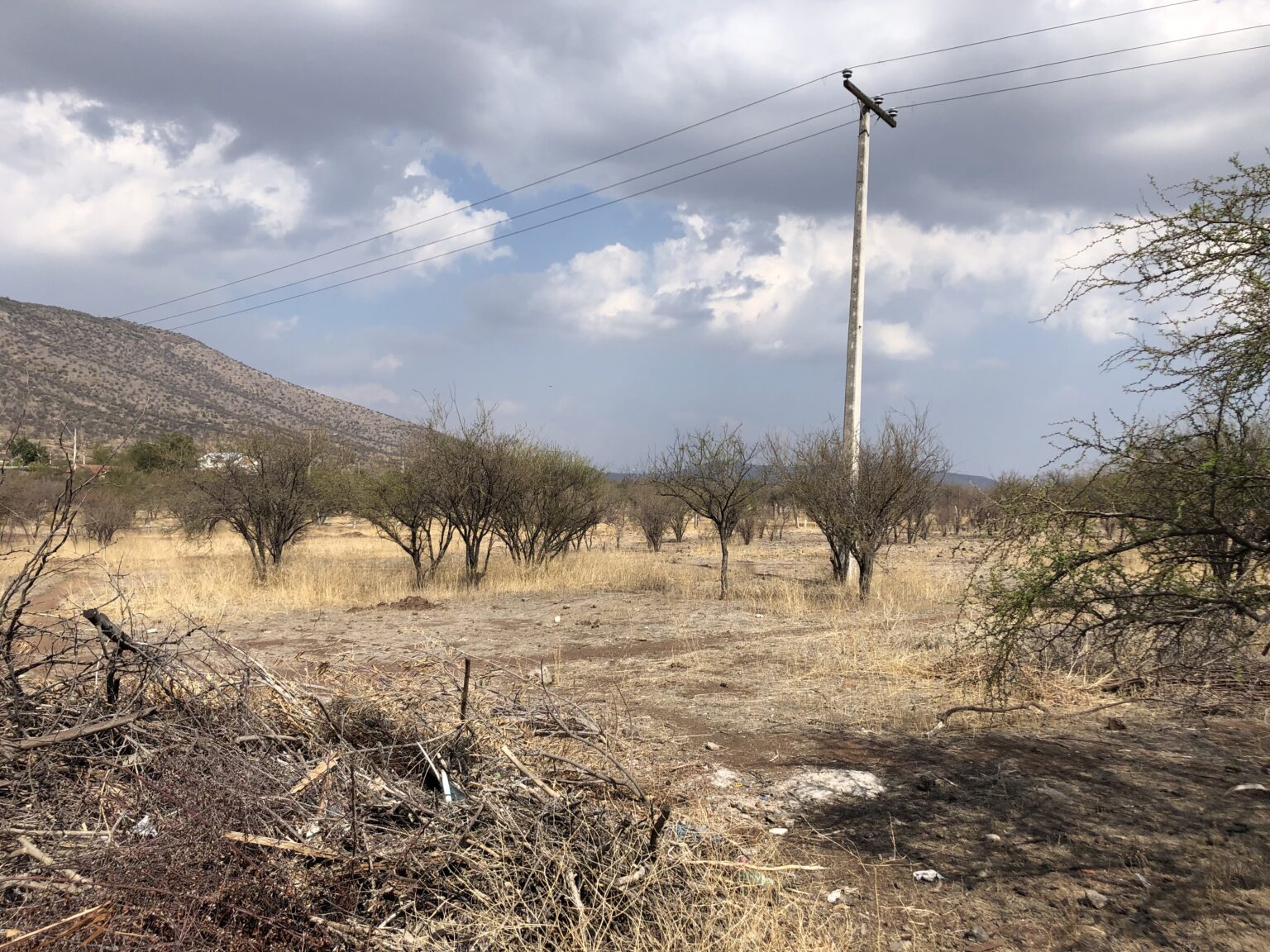 On two hectares of this rugged land in Rungue, a town of 1,200 inhabitants some 54 km from the Chilean capital, a community Renewable Energy Cooperative hopes to install rows of solar panels close to the electricity grid in order to transfer the surplus. The 50 kW photovoltaic plant will generate 102,000 kWh per year and will initially lift 40 families out of energy poverty. CREDIT: Orlando Milesi/IPS

Cooperative to the rescue

In Rungue, a village 54 kilometres north of Santiago, EBP Chile promoted the creation of a cooperative for low-income households to install a community solar plant.

The solar panel plant will have a nominal capacity of 50 kW and will generate 102,000 kWh per year, providing energy for 40 households.

“We started two years ago, with the encouragement of a pioneer, to help alleviate the costs paid by the most vulnerable families,” said Leandro Astudillo, the 41-year-old manager of the Rungue Renewable Energy Cooperative.

At a meeting with IPS in Rungue, he explained that “based on people familiar with the needs of local residents, the Cooperative organised people born and raised in this community. The Neighbourhood Council, the school’s Parents’ Centre, the Housing Centre, the sports club and Rural Potable Water are represented, all of them sensitised to the project.”

“We have already registered 40 families who will benefit. Priority was given to senior citizens who have very small pensions and to people who find it difficult to pay their electric bill. Also to women and single mothers with large families,” he explained.

Each beneficiary is supposed to pay a little over 300 dollars, but the Cooperative is taking steps to waive this payment and reduce each beneficiary’s monthly contribution to zero.

The dry, arid village is still suffering the consequences of a metal refining plant called Refimet, which is no longer operating but contaminated with arsenic the waters of a dam and reservoir built in the 1950s for the irrigation of local agriculture.

Rungue is home to 1,200 people who mainly work in nearby companies and in several markets set up in the area, because there is almost no local agricultural production anymore. 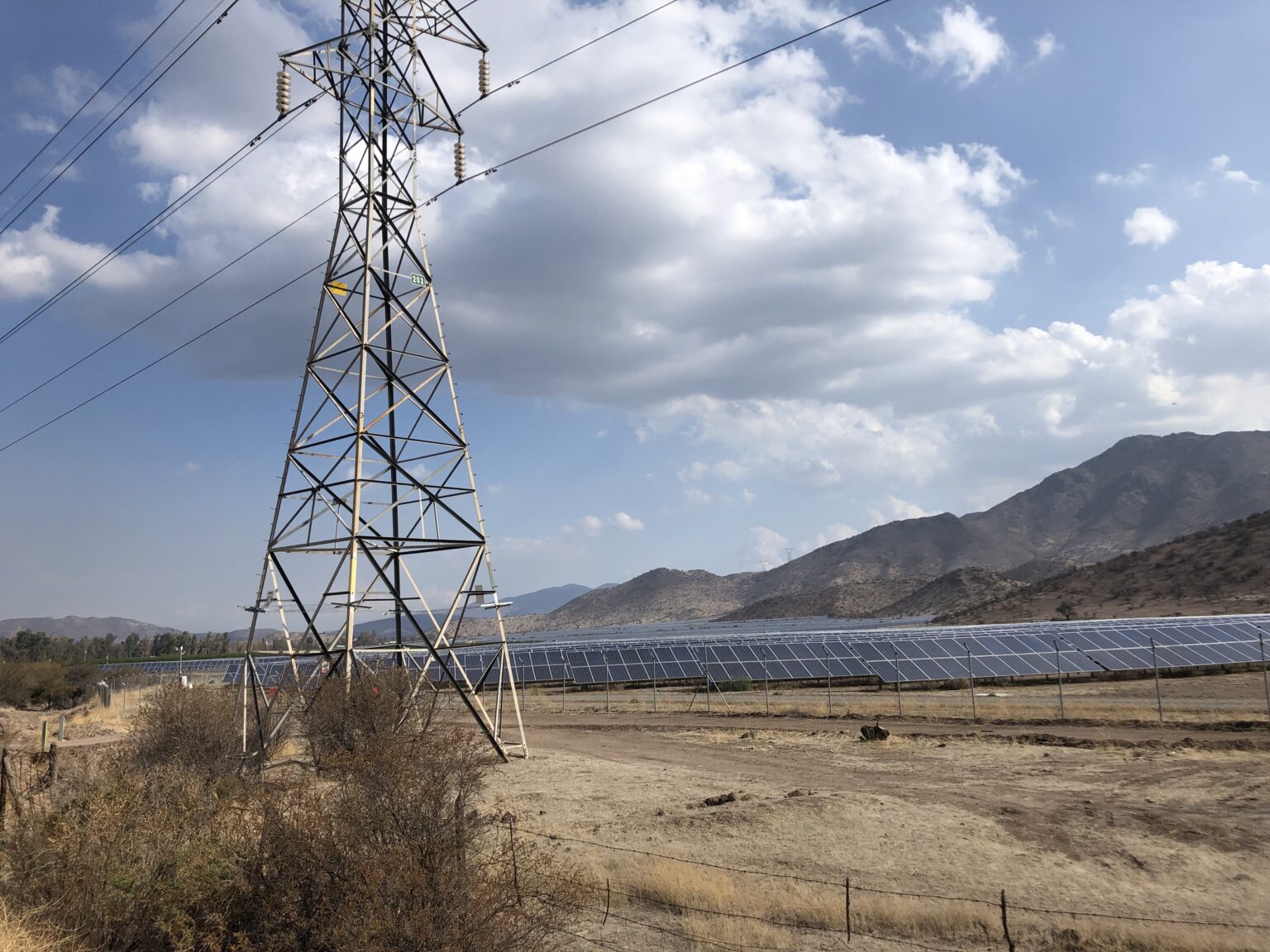 View of the Santiago Solar Photovoltaic Park near Rungue, on the freeway linking the cities of Santiago and Valparaíso in central Chile, which the members of the local renewable energy cooperative are seeking to partially imitate. The Park takes advantage of the strong sunlight in the area by means of 33,600 solar panels installed on 202 hectares, with nine MW of power and a generation capacity of 210 GWh. CREDIT: Orlando Milesi/IPS

“Energy inclusion implies identifying, networking, implementing concrete projects, fomenting and promoting. The idea is to scale all of these up,” she said.

The EBN programme, she said, “is carried out in partnership with several institutions, including the Swiss Embassy, the Energy Poverty Network (RedPE), the EGEA (Emprendimientos y Generación de Energías Alternativas – Alternative Energies Generation and Ventures) foundation, and numerous companies in the energy sector, including ENEL (an energy holding company) and AME (focused on solar energy and gas).”

Non-conventional renewable energies (NCRE) represent 24.5 percent of Chile’s energy mix. In September 2021 they accounted for 31.8 percent of electricity generation. In total there were 2071 GWh of generation, of which 952 came from solar power and 767 from wind power.

Distributed or decentralised generation, which allows self-generation of energy based on NCREs and efficient cogeneration, reached 95.3 MW in August in 8759 installations throughout Chile, of which 2354 are in Santiago.

Borregaard proposes raising the carbon dioxide (CO2) emissions reduction tax from five to 30 dollars for each ton of polluting gas emitted to generate offset projects or finance pilot initiatives such as those of Renca, Rungue or similar ones.

One example of such projects is a community modular refrigeration plant on Juan Fernandez Island, 800 kilometres off the coast of the city of Valparaiso in central Chile.

It consists of a refrigeration system using solar energy to preserve marine products and foment sustainable artisanal fishing. It was built in conjunction with the Confederation of Artisanal Fishermen of Chile and is aimed at the conservation of lobsters, fish, octopus, and crab.

The facilities have 3015 Watts of installed power and the refrigeration chamber is 10 cubic metres with 1.5 HP equipment.

In towns near Mamiña, in the desert region of Tarapacá in the extreme north of the country, there is an adaptive infrastructure project to promote community resilience and optimise the management of resources, based on water, energy and waste.

In the indigenous communities of Quipisca and Macaya, near the Cerro Colorado mine in the same region, the plan is to install solar panel systems to exchange surplus energy.

In all the localities where the projects are being carried out, the objective is the same: to provide greater autonomy and reduce energy poverty through community empowerment and improved resource management capacity in this long, narrow South American country sandwiched between the Andes mountains and the Pacific Ocean.