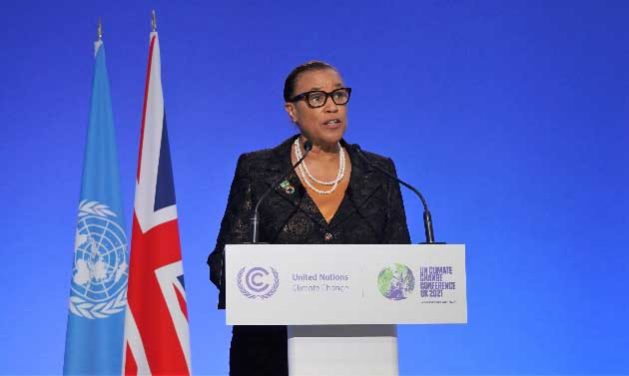 Nov 10 2021 - Commonwealth Secretary-General Patricia Scotland has appealed to world leaders attending the UN Climate Change Conference COP26 to close the gap in ongoing negotiations this week in Glasgow, with millions of lives and livelihoods on the line in climate-vulnerable countries.

Secretary-General Scotland delivered her statement today to the resumed high-level segment of the conference, hours after a draft outcome document was released by the United Kingdom, as chair of the summit.

She said: “If we lose vulnerable nations who have battled with courage and resilience, we lose the fight against climate change.”

“If the gaps on emissions are not closed, if improved access to climate finance does not materialise, we risk the most vulnerable nations amongst us being subsumed by sea level rises and being engulfed by debt, exacerbated by the Covid-19 pandemic.”

“Do not grow weary and lose heart. Dig deeper, come together, and close the gap in these negotiations.”

More than 2.5 billion people live in the Commonwealth’s 54 member countries, 60 percent of whom are under age 30. That includes 32 small states and 14 of the least developed countries of the world which are facing the brunt of the climate change impacts.

The Secretary-General added: “Millions are already losing lives and livelihoods from the impacts of climate change, but they are fighting. We must too.

“They know that, without action, the force and frequency of violent weather, fire, shortages of food, water and the threat of rising seas will continue to intensify until it overwhelms them. They require inclusive, just and equitable actions.”

In earlier discussions at COP26, the Secretary-General reiterated the call for developed countries to deliver the promised US$100 billion in annual climate finance to support developing nations, both for adaptation as well as mitigation purposes.

She added that funds also need to be accessible to the smallest and most vulnerable countries, who currently have difficulties tapping into finance due to lack of capacity and data.