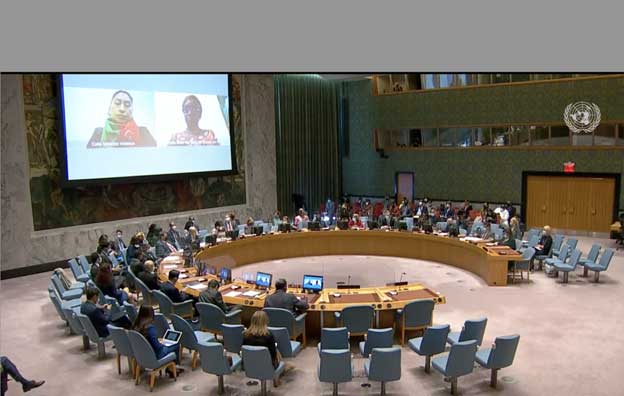 UNITED NATIONS, Nov 3 2021 (IPS) - On 21 October, I had the honor of addressing the UN Security Council at the annual open debate on Women, Peace and Security. I spoke as a member of Cxhab Wala Kiwe, which means “Great People’s Territory” in the Nasa Yuwe language, also known as ACIN—Association of Indigenous Councils of the North of Cauca—in Colombia.

I am an Indigenous activist dedicated to my people, our territory, the environment and the cause of peace.

I spoke on behalf of the NGO Working Group on Women, Peace and Security, and as a representative of Indigenous women and women in all their diversity—campesinas, Afro-descendant women, LGBTQI+ persons, refugee and migrant women, women with disabilities and women from countries around the world who suffer from war, poverty and discrimination.

As I said in my remarks, I continue to affirm my solidarity with the women and LGBTQI+ people of Afghanistan who continue to risk their lives fighting for their rights and equal place in Afghan society. We stand with you.

Colombia remains one of the world’s most dangerous countries for defenders of human rights and of land and territorial rights. Attacks on human rights defenders, especially women, LGBTQI+, campesino, Afro-descendant and Indigenous leaders have continued, including in response to the recent protests in Colombia against extreme inequality, violence and scant implementation of the Peace Accord.

On average, at least one Indigenous defender is killed every week. In my territory of Cauca, three Indigenous women leaders whom I worked with were killed in 2020. Their brutal murders illustrate how women often pay a terrible price for their leadership.

For an Indigenous person, land means everything to us. We are nourished by it, and it is a part of our identity and our history. Indigenous communities oppose logging, mining, agribusiness and other large-scale extractive and infrastructure projects—many of which are actively supported by the Government of Colombia—because they threaten the environment and deplete our natural resources.

Indigenous defenders in Colombia are viewed as a threat because we challenge powerful economic interests. My people are killed for protecting our waterways and forests, our flowers and fauna, when their courage and dedication should be held up as a model in the non-violent struggle for territorial rights. 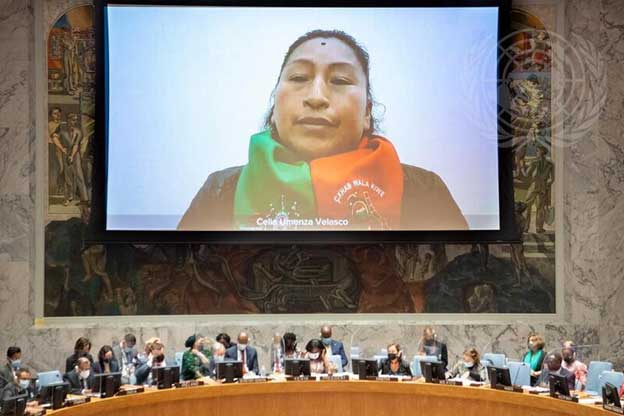 Violence against our communities also demonstrates the devastating impact of militarized responses to social crises. Indigenous communities in Colombia have been calling for demilitarization for decades. Much of the war was waged on our land, and much of the violence continues in our territories today.

Although we have peace in name, lack of implementation of the Peace Accord has refueled conflict. At one point in the war, an Indigenous person was killed every 72 hours, most often caught in the crossfire between armed actors.

Today, the state continues to use militarized force through its security apparatus, particularly in rural areas. The only state presence we see in our territories is the military and the police, who often appear to protect the economic interests of powerful sectors, rather than the rights of local populations.

This represents a failure to comply with the provisions of the Peace Accord. Furthermore, during the recent national protests, police used excessive force against peaceful demonstrators across the country, particularly in Cali where a greater percentage of the population is Afro-descendant and where our Indigenous guard was attacked.

State forces have committed sexual and gender-based violence. Peaceful protestors have been subject to torture, illegal detention, disappearances and killings, echoing the violence that has marked over five decades of war. The gravity of this situation led the Inter-American Commission on Human Rights to call for the overall demilitarization of the police in Colombia.

The Peace Accord, with 130 provisions on gender equality and women’s rights, was achieved due to the determined struggle of Colombian feminist movements. On paper, the Peace Accord provides the foundation for a democratic country.

Implementation is most delayed in provisions for Comprehensive Rural Reform, which would give women access to land and enable them to chart a path to inclusive and holistic development for their communities.

This has allowed the expansion of extractive activities that exploit natural resources, violate territorial rights, exacerbate conflict, and increase violence against human rights defenders, especially those who defend their land.

Colombia’s Peace Accord may be unprecedented in its incorporation of international standards of gender equality—but what good are agreements and promises if they are not kept?

Threats faced by women peacebuilders and human rights defenders in one community are a threat to women everywhere. Despite ten resolutions and repeated affirmations of the value of civil society, the issue of women human rights defenders remains a critical gap in the Security Council’s implementation of the women, peace and security agenda.

Colombia is no different—although Security Council members have regularly condemned the targeting of human rights defenders and social leaders, they have not done enough to turn words into action.

Ending attacks against women human rights defenders, not only in Colombia, but in all conflicts on its agenda, and ensuring the full, equal and meaningful participation and leadership of women in all their diversity, is essential for sustainable peace.

I urged the Security Council to call on the Colombian Government to:

• Fully implement and resource the Peace Accord, in particular the Ethnic Chapter and gender provisions. This includes ensuring regular consultations with, as well as resources and technical assistance for, the High-Level Forum for Ethnic Peoples and the Special Forum of Women, as well as for campesino, Afro-descendant, Indigenous and women’s organizations to monitor the Peace Accord’s implementation.

• Adhere to free, prior and informed consent processes with campesino, Indigenous and Afro-descendant communities, including regularly consulting with their authorities and community organizations, with regards to economic development in their territories, and ensure that development processes comply with international human rights principles and law, and with the Peace Accord.

• Address the crisis of violence against human rights defenders, including by ensuring: accountability of perpetrators when such attacks occur, and full resourcing for the development of collective and territorial self-protection measures for Indigenous, campesino and Afro-descendant communities, as well as support for their permanent presence in fora where protection policies are discussed, especially the National Commission for Security Guarantees and the Intersectoral Commission for Guarantees for Women Leaders and Human Rights Defenders.

• Ensure the full, equal and meaningful participation of women leaders in the implementation of the Peace Accord and in negotiations with other armed actors in Colombia.

Peace is more than the absence of war. To Indigenous women, it means an end to discrimination, respect for human rights, justice, economic equality, and transformative change with human life at its center.

As the primary international body responsible for peace and security, I urged the Security Council not to allow this year’s open debate to be yet another occasion where they listen to women civil society, but fail to act on our concerns.

The plight of Afghan women illustrates all too clearly the cost of doing so. Women around the world show daily that they have courage and the conviction to fight for peace. We call on the Security Council, and leaders at all levels, to fight for us all.