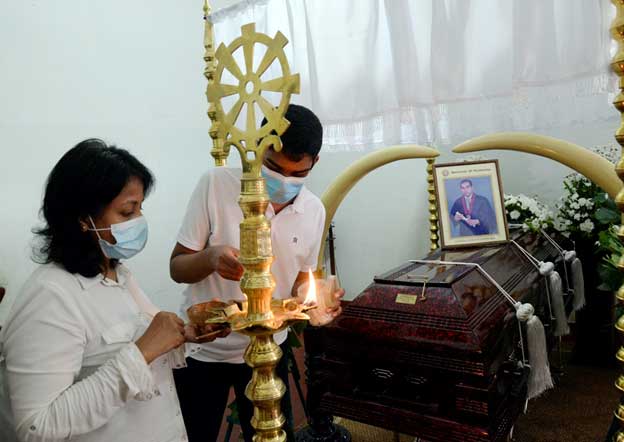 Family members of Priyantha Kumara, who died in the Sialkot mob attack, taking part in religious rites at his funeral.

COLOMBO, Si Lanka, Dec 13 2021 (IPS) - Every time, breaking news of a barbaric crime or terror act is reported from anywhere in the world, peace-loving Muslims the world over feel dejected and wish it had not been another tragedy that will make others glower at them with suspicion as though they too are complicit in the crime.

But often, what they dread is the case, for more than 90 percent of such inhumane and barbaric acts – like the Sialkot slaying of a Sri Lankan factory manager and the Easter Sunday massacres — are associated with Islamic extremism.

Last Friday’s lynching of factory Manager Priyantha Kumara Diyawadanage in Pakistan by an extremist mob will not be the last of such acts.

No amount of ‘We Are Sorry Sri Lanka’ placards, flowers and candles at makeshift memorials and political statements denouncing the crime can bring back his life that was cruelly brought to an end as a burnt offering on the altar of bigotry in an expression of savagery that has no place in civilized society.

However much Pakistanis who are humiliated by extremism dissociate themselves from the horrible act, however profound their apology is, however remorseful Pakistan Prime Minister Imran Khan, who decried the incident as Pakistan’s day of shame, is, the country will continue to be plagued by violent extremism unless and until extremism is rooted out by radical social reforms in line with the peaceful message of Islam.

The Priyantha Kumara lynching by a mob linked to an extremist outfit called Tehereek-e-Labbaik Pakistan, for tearing off a political poster that allegedly had some religious verses in Urdu warrants the immediate revocation of Pakistan’s blasphemy law or its amendment in keeping with the Islamic virtue of tolerance and magnanimity.

Research shows a higher prevalence of extremism in countries that have blasphemy laws than in countries that do not have such laws. Blasphemy laws are often misused to persecute the minorities or treat them as second-class citizens. Such laws are incompatible with the Islamic teaching which calls for protection of the minorities and non-interference in their worship.

If the Pakistan Government fails to make use of this heartrending incident as an opportunity to bring about radical reforms, it itself will be committing an act of blasphemy because its inaction allows the badly constructed law to distort and disgrace Islam.

Pakistan was carved out of the British Raj for the Muslims of the subcontinent. Its founder Muhammad Ali Jinnah promoted a theory of two nation two state, saying that the Muslims and Hindus were two different nations and belonged to two different civilizations and therefore needed to live in separate states.

The world’s first nation-state to be formed on the basis of religion, Pakistan, however, has never been a theocracy.

In a 2017 BBC interview, historian Ayesha Jalal pointed out that Jinnah envisaged Pakistan as a “homeland for India’s Muslims”, as opposed to an Islamic state. But she said that his theory had been used by Islamists “as an ideological device” to justify claims for Pakistan to be a theocratic state.

This is Pakistan’s existential crisis. While the extremists fight for the setting up of a theocracy, secular politicians skillfully make use of Islam and side with Islamists to swell their vote banks or to whip up nationalistic emotions against archrival India.

Perhaps, this was why Pakistan’s Defence Minister Pervez Khattak was seen belittling the gruesome murder of Priyantha Kumara, by calling it “youthful exuberance of Muslim youngsters” and “happens all the time”.

He reportedly added, “When the youth feel Islam has been attacked, they react to defend it.” This was while Premier Khan vowed to bring the murderous mob to justice and Pakistan police arrested more than 130 people.

If we play with fire, we get burnt. Pakistan has been burnt enough, yet it appears to have not learnt enough. Seven years ago this month, extremists carried out a gruesome school massacre in Peshawar. In this terror attack some 134 schoolchildren, aged between 8 and 18, and 16 staff members were brutally gunned down by the Pakistan Taliban. So why pamper the extremists?

In 2011, Pakistan’s Punjab Province Governor Salman Taseer was shot dead by a police guard over his opposition to the country’s blasphemy law that calls for death sentence to those who insult Islam or its holy personalities.

Taseer was also calling for the release of Asia Bibi, a Christian woman who was falsely accused by her neighbours of insulting the Prophet Muhammad. Taseer’s assassin was hailed as a hero by a large number of extremists who took to the street to celebrate the murder.

As a result of violent extremism, many non-Muslims find it difficult to accept the Muslims’ assertion that Islam is a religion of peace. What many do not understand is that there is little Islam in today’s world, although about 2 billion Muslims constitute one fourth of the world’s 8 billion population.

In Islam, jihad or holy war is not the norm, but a last resort exception to defend the oppressed. Vigilante justice has no place in Islam. The accused should be heard, Islam commands.

To whatever religion they belong, the problem with extremists is their ignorance of the teachings of the religion they are supposed to follow. As historian and comparative religions expert Karen Armstrong would say, “Terrorism has nothing to do with Muhammad, any more than the Crusades had anything to do with Jesus.”

Certainly, violence is not the answer to blasphemy. According to the Quran, the Prophet Muhammad was heaped the worst form of scorn. He was called a liar, a magician, a madman, and possessed. Garbage was thrown over his head and stone-throwing street urchins were set upon him.

Yet as commanded by God, he exercised beautiful patience — Sabran Jameelan — and when his companions sought permission to retaliate, he would teach them the virtues of patience and remind them that he was sent as a mercy to the whole world. He befriended his persecutors by practising the Quranic injunction which exhorts the Muslims to “repel that which is evil with that which is good (and virtuous)”.

Unfortunately, the verses on defensive wars the Prophet and the early Muslims were forced to fight were misinterpreted by latter day Muslim rulers and terrorists for political purposes. Glorification of violence in the name of Islam became the norm. Islam’s peaceful message was forgotten.

Also overlooked is the Quranic message against violence as explained in the story of angels who expressed their deep concern over bloodshed and mischief on earth when God wanted to create man. (Quran 2: 30.)

It appears that instead of Islam, some Muslims are following a violent creed and calling it Islam. The fake Islam is largely practised while the real Islam remains buried. The task before the Muslims is to search for the buried Islam, resurrect it and live it.