Many in the crowd taking videos of the extrajudicial killing in Sialkot.

KARACHI, Dec 7 2021 (IPS) - Mukhtiar’s heart sank when he saw the grisly incident of lynching of a man in the industrial city of Sialkot, in Punjab province.

The videos, taken on cell phones and put online, showed 49-year-old Priyantha Kumara Diyawadanage, a Sri Lankan national and manager of a garment factory, showing him being punched, kicked, hit with stones and iron rods, and killed. Not content, they then dragged his dead body out of the factory and set it on fire.

It was the same city which 11 years ago, had witnessed mob lynching two brothers, 22-year-old Hafiz Muhammad Mughees Sajjad and Mohammad Muneeb Sajjad, 16, in 2010, with support of the local police, on charges of theft. Later their bodies were hung upside down in the city square.

“There must have been no less than 2,000, men, mostly young, charged and in a frenzy, chanting ‘Labbaik Ya Rasool Allah’ (Here I am at your service, O Messenger of Allah), a slogan used by a far-right Islamic extremist political party, Tehreek-e-Labbaik Pakistan (TLP),” said Sakhawat Mughal, a reporter working for Hum News, a private television channel, recalling what he saw.

“Many men had batons in hand. The police looked on and waited for backup,” he said, adding: “Had the handful of the law enforcers reacted, many more lives would have been lost.”

People from all walks of life have been shocked and condemned the incident.

“The Sialkot incident is a horrible example of the growth of extremism and violent mob lawlessness,” said the National Commission for Human Rights chairperson, Rabiya Javeri Agha. “The government should ensure speedy and equitable justice, and perpetrators must face the full force of law.”

According to rights activist Usama Khilji, director of Bolo Bhi, a civil society organisation geared towards advocacy, policy, and research in civic responsibility and digital rights, the TLP has managed to infiltrate the middle class disenchanted with mainstream political parties. The party stirred up ordinary people’s sentiments using tools of “religious passion and hatred towards any perceived act of anti-Islam” to drum support for itself and respond with violence when called upon to cause mischief.

What was even more disturbing was that not only did the people join in throngs to watch the horrendous incident, but they also filmed it and even took selfies showing Diyawadanage body burning in the background.

“Today, sections of the middle-class youth feel proud of lynching on a genocidal level, believing killing alleged blasphemers is an act of valour,” lamented Khilji.

Sitting 130 kilometres away in Lahore, the capital city of the Punjab province, and belonging to the Christian community, the breaking news from Punjab, for Mukhtiar, who goes by one name, was even more disturbing.

Along with the footage of the mob and burning of Diyawadanage body, the various television channels also showed archival photos of his late daughter Shama, and her husband, Shahzad. They were lynched by a mob in 2014 and pushed into a burning brick kiln where the husband worked, in Kot Radha Krishan’s village of Chak 59, near the city of Kasur, also in Punjab. They were punished for allegedly burning pages of the Holy Quran.

“Her three kids who are living with me were disturbed and cried a lot on seeing their parents’ faces plastered on the screen, as the older two remember the incident quite clearly,” said the grandfather, talking to IPS over the phone.

“The incident that happened yesterday (Friday, December 3) was a criminal act, as was my daughter’s and son-in-law’s lynching,” he said, adding: “Do you think any civilised person would want to carry out a sacrilegious act against any faith?”

“Nothing that happened on the part of Diyawadanage constitutes the offence of blasphemy as is the case in nearly all cases prosecuted under these laws,” pointed out Peter Jacob, executive director of Centre for Social Justice. Initial investigations by police suggest the manager had removed posters of a religious moot, as the factory would be whitewashed. 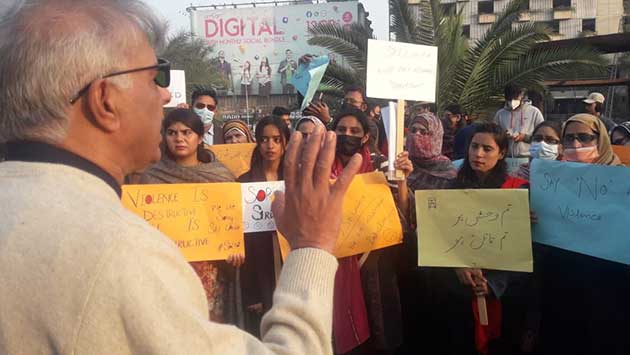 Peter Jacob, executive director of Centre for Social Justice addressing a crowd of protestors in Lahore. He and other rights activists have condemned the killing.

Mukhtiar further pointed out the consequences of committing blasphemy against Islam in Pakistan were “far too grave” for anyone to dare.

Statistics also point that one does not have to belong to a religious minority to be accused of blasphemy and face vigilante violence. The majority of the accused are Muslims.

At least 1,890 persons have been accused of committing blasphemy, under various clauses of the blasphemy law, from 1987 to 2021, said Jacob, who has been collecting data for the last 30 years, adding: “The year 2020 saw the highest number of accused.”

Of the 75% Muslims accused this year, 70% belonged to the Shia sect, he said, and 20% belonged to the Ahmadi community, 5% were Sunni, 3.5% were Christians and 1% Hindus. Religions of 0.5% could not be ascertained, Jacob told IPS over the phone from Lahore.

From 1992 till December 4, 2021, there have been 81 extrajudicial killings on suspicion of blasphemy and apostasy, 45 were Muslims, 23 Christians, nine Ahmadis, two Hindus and two persons whose religious identity could not be ascertained, Jacob noted.

In 2017, Mashal Khan, a Muslim student studying at Abdul Wali Khan University, in Mardan, in Khyber Pakhtunkhwa, was killed by his peers for allegedly posting blasphemous content online. The accusation was later proved to be fabricated.

Even in Shama and Shahzad’s murder, rights activists later found the attack was instigated by the brick kiln owner who had an altercation with Shahzad over a money dispute.

The Prime Minister terming the incident a “horrific vigilante attack” promised that all those responsible would be punished with “full severity of the law”. News reports say police have arrested over a hundred, including 19 who played a “central role” in the brutal killing.

For Mukhtiar, these promises ring hollow.

“There will be a lot of promises for a few weeks, and then when the public’s attention is diverted, the perpetrators will be released, you wait and see,” he said.

“Of the five men charged with murder and sentenced to death, two have been released,” he said. After seven years, he was tired of doing the court rounds or seeking justice. “I’m old and a heart patient, and I have the responsibility of these three kids too!”

Khilji also remained sceptical whether justice will be “dispensed to the mob” given Pakistan’s “dismal track record” in such cases.

“Entire police stations have been burnt down for perceived inaction towards blasphemy-accused people by the TLP,” he said, giving the example of the state caving into this group that exudes “massive street power”.

And this “capitulation” to those demanding, inciting, encouraging, and perpetuating violence, pointed out Saroop Ijaz, senior counsel with Human Rights Watch’s Asia division, has reinforced the “legitimacy of violence” in the public consciousness.

A December 5 editorial in Dawn said: “… on the last day of his life, Mr Diyawadanage came face-to-face with the consequences of the Pakistani state’s decades-long policy of appeasing religious extremists.”

“The Sialkot incidence is yet another reminder that violence and impunity are now embedded in society on the issue of blasphemy,” Ijaz told IPS, emphasising the urgent need for holding a “national conversation on violence” and, in particular, on how religion is often used to incite violence.

But, he was not sure if the government was “ready and willing to provide an enabling environment for such a conversation” to be had.