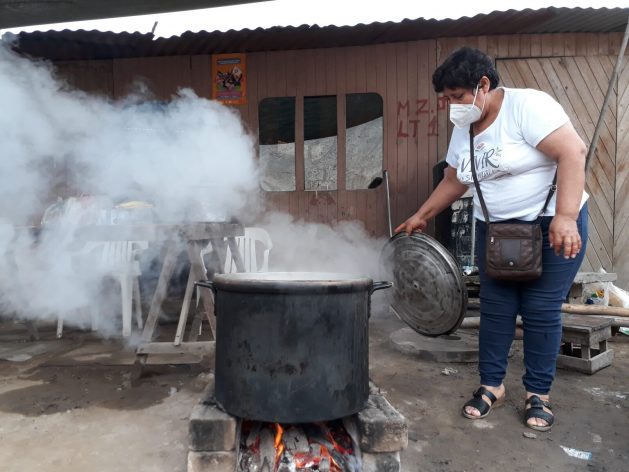 Fortunata Palomino is an experienced community organizer from Carabayllo and general coordinator of the Network of Soup Kitchens of Metropolitan Lima, which includes 2,247 soup kitchens. She is critical of the neglect by the authorities and hopes that women will be trained, certified and incorporated into the labor market with respect for their rights. CREDIT: Mariela Jara/IPS

LIMA, Jan 24 2022 (IPS) - It’s nine o’clock in the morning and Mauricia Rodríguez is already peeling garlic to season the day’s lunch at the Network of Organized Women of Villa Torreblanca, one of more than 2,400 solidarity-based soup kitchens that have emerged in the Peruvian capital in response to the worsening poverty caused by the partial or total halt of economic activities in the country due to COVID-19.

Up to Mar. 16, 2020 – when the government of then President Martin Vizcarra declared a state of national emergency in an attempt to curb the pandemic – Mauricia made a living selling snacks and meals at a school, while her husband drove a rented motorcycle cab, with which he provided local transportation services. But from one day to the next, they were left without their livelihood.

They were not alone. In this Andean country of 33 million people with solid macroeconomic fundamentals, the pandemic exposed structural flaws that cause deep inequality gaps. For example, seven out of 10 workers were working in the informal sector as of 2019, lacking pensions, health insurance and other labor rights, and with no possibility of saving money, like Mauricia and her husband.

As a result of the health emergency measures and the pandemic more than six million people became unemployed in 2020, most of them in the informal sector in the areas of commerce and services, where women play a predominant role. In Latin America, 34 million jobs were lost that year, according to the International Labor Organization.

In addition, according to a report by the National Institute of Statistics and Informatics (INEI), poverty had climbed 10 percentage points to 30 percent, pushing another 3.33 million people into a precarious situation, who could no longer afford the basic basket of goods, estimated at 360 soles (92 dollars) a month.

Families in impoverished neighborhoods in the capital were among the hardest hit.

“The already existing poverty was aggravated by the pandemic. We saw people getting desperate, they had nothing to eat,” Esther Alvarez, a lawyer in charge of advocacy at the non-governmental CENCA Urban Development Institute, which has been working for more than 40 years in poor neighborhoods on the outskirts of Lima, such as those in the San Juan de Lurigancho district, told IPS by telephone.

Soup kitchens spontaneously emerged thanks to food donations and community organization based on solidarity, reciprocity and a humanitarian and rights-based approach, combining efforts with the local parishes, to address the growing hunger in areas invisible to the authorities, in the country’s capital itself.

In Lima, where a third of the national population is concentrated -almost 10 million inhabitants- poverty climbed from 14.2 percent to 27.5 percent, and it is estimated that with the crisis another 250,000 people have fallen into extreme poverty, unable to afford a basic food basket of 196 soles (49 dollars) a month.

Alvarez explained that in alliance with other civil society institutions, they organized the soup kitchens that emerged in different districts of Lima, creating a permanent online communication space, which continues to this day, while promoting the formation of the Network of Soup Kitchens of Metropolitan Lima.

The network and online communication space enable interaction between the organizers of the soup kitchens, mainly women, who have emerged as leaders in the fight against hunger and for the right to food, issues that should be addressed by the authorities. 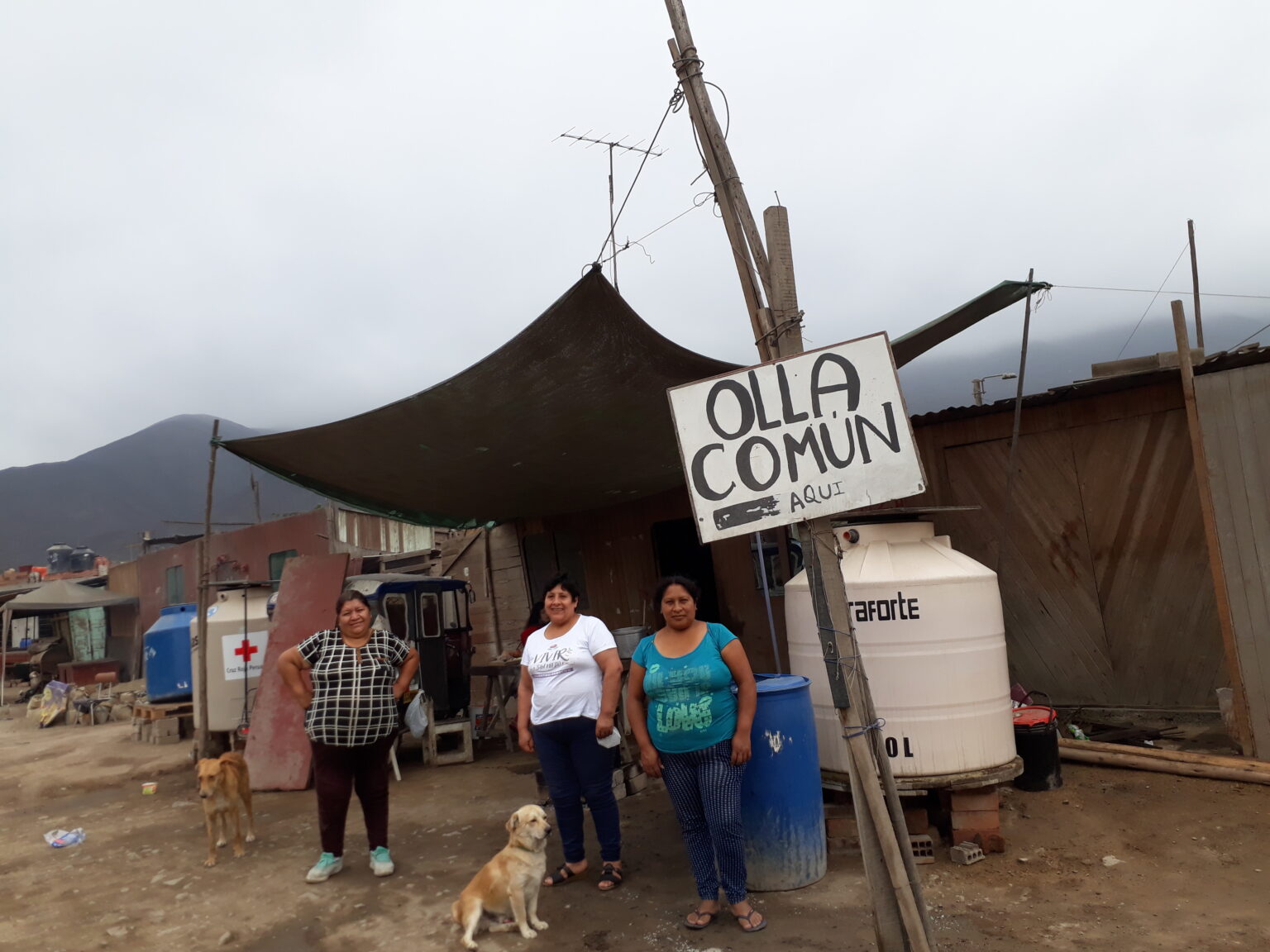 Three women community organizers whose solidarity and efforts contribute to the food security of impoverished families in the area stand outside their local soup kitchen. From left to right, Mauricia Rodríguez, Fortunata Palomino and Elizabeth Huachilla. During the visit by IPS, the menu, cooked with firewood because of the lack of cooking gas, consisted of rice with panamito beans and fried bonito, a fish rich in Omega 3. CREDIT: Mariela Jara/IPS

The Network of Organized Women of Villa Torreblanca soup kitchen emerged in the upper part of the district of Carabayllo, located on the slopes of hills in the northern part of the capital. A few days after the national pandemic emergency was declared, it began to operate in the wooden house of Elizabeth Huachillo.

A native of Ayabaca in the northern highlands of Peru, she came to Lima at the age of 15 to find work and today, 40 years old and the mother of Lizbeth, 17, and Tracy, seven, she is the driving force behind the soup kitchen.

Huachillo drove a motorcycle taxi to support her family, but as a result of the lockdown she was unable to work and they were going hungry. “We had nothing to eat and I began to investigate how to create a soup kitchen. I looked up Señora Fortunata, who is a well-known and respected leader in the district, and together with her we launched it on Mar. 23,” 2020, she says while showing IPS the fish that will be served in today’s lunch.

Fortunata Palomino is 57 years old. From her native Ayacucho – a central Andean region devastated by the 1980-2000 internal armed conflict – she was sent to the capital by her parents when she was still a child. She went through many difficult situations to get ahead and put a roof over her head. She has four daughters who have managed to become professionals and she is proud she was able to make it possible for them to have an education.

While she and her husband ran their household, she became involved in different organizations to promote the rights of local people, including nutrition and a life free of violence for women and children.

She is familiar with the district and the plight of its people, especially in the shantytowns built on the hillsides where the houses are made of wood, families have no drinking water or sanitation and the roads are unpaved. “The authorites are absent here,” she complained.

She feels like a survivor when she thinks back to March 2020 and the terrible uncertainty, anxiety and fear that swept through the poorest families in her neighborhood.

“We were the first to start up a soup kitchen in Carabayllo, and many more followed suit, until there were 137,” she said.

In order to coordinate and strengthen their activities, they formed the Network of Soup Kitchens of Metropolitan Lima, of which she was elected general coordinator. As of November 2021, a total of 2,468 soup kitchens were registered there, feeding 257,000 people a day.

“Here in our soup kitchen we served 250 lunches a day at the peak of the crisis. Now we make 120 because some people have managed to return to their jobs as collectors, drivers or street vendors,” said Elizabeth Huachillo.

The solidarity price is two soles (51 cents). But nothing is charged in special cases, such as the elderly or people with tuberculosis. When the women find out someone has COVID, they leave the meals in plastic containers on their doorstep. And children orphaned by the death of their parents due to COVID-19 also receive free meals.

According to the Ministry of Women and Vulnerable Populations, in 2021, there were 98,000 minors orphaned by the pandemic.

“We are doing what the authorities should be doing because we could not remain indifferent to such desperation. Despite our efforts, it has been a struggle to achieve legal recognition of the soup kitchens so they can access budget funds; the law was passed last year and now it is time for it to be implemented,” Huachillo said.

With the political instability that Peru has experienced in recent years, four governments have already managed the pandemic, and each one has made some achievements in coordination with civil society organizations and the Food Security Board of the Municipality of Lima, a multisectoral body that brings together social organizations, non-governmental institutions and the State.

Esther Álvarez of CENCA said the challenges for this year include achieving the implementation of the food emergency law and the allocation of a budget for the soup kitchens to address the food emergency, and to get the government to approve a regulatory framework that incorporates them into a Zero Hunger Program.

For her part, Fortunata Palomino is thinking about the post-pandemic world and suggests that the government should train and certify the women currently running the soup kitchens in various activities so that they can join the formal labor market in the future. “We need our own incomes with jobs that respect our rights,” she said.