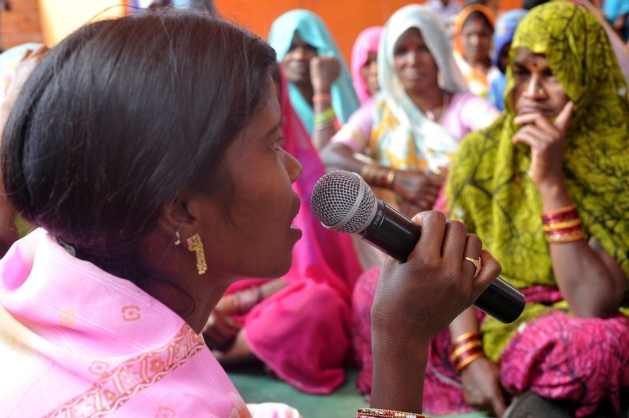 Building the knowledge, self-confidence, voice, and mobility of women can have a positive impact on women’s participation in politics | Credit: Flickr

As a country, we have made significant progress. Both men and women in India now vote in equal numbers, but we have a long way to go when it comes to women’s political participation beyond voting

India has completed 73 years of being a republic, but we are still very far from reaching equal representation and making politics an aspirational career choice for young girls. We currently have 78 (out of 543) women parliamentarians.

At 14.3 percent, this is the highest representation of women we have seen since 1947. This figure is much lower at the state-level—we have an average of nine percent of women in our state assemblies. Six Indian states have no female ministers.

As a country, we have made significant progress. Both men and women in India now vote in equal numbers, but we have a long way to go when it comes to women’s political participation beyond voting. This includes campaigning for candidates, running for office, and holding political office.

A study from Uttar Pradesh in 2019 suggests that women lag behind in several determinants of political participation, such as knowledge of how political institutions work and confidence in their own leadership abilities.

Building the knowledge, self-confidence, voice, and mobility of women can have a positive impact on women’s participation in politics. This needs to happen early for young girls so that they can build the ability to think critically and play a role in shaping India’s future.

While setting up Kuviraa, an initiative that works to build political engagement and leadership among young girls, we found that most schools (apart from a few progressive, alternative ones) and parents shy away from speaking to students about politics given how polarised our society has become. This unfortunately leaves young people to get most of their information on politics from unverified sources and social media, which has built cynicism among our youth.

In October 2021, we conducted a workshop with a group of 13 year olds and asked them to draw their perception of India’s politicians. We made two observations:

To further understand how young people, especially young girls, across India perceive politics, we collected data from over 400 children and young adults—between the ages of 11 and 24—across 24 Indian states. We found similar trends with respondents using ‘corrupt’, ‘confusing / complicated’ and ‘dirty’ as the top adjectives to describe India’s politics.

There is a difference in political aspirations between girls and boys

Female respondents also reported being less familiar with political processes and their local elected representatives compared to their male counterparts. Additionally, they were less likely to discuss politics with their friends and family.

Our study further showed that at a younger age (11–17 years), girls are more interested in politics than boys, but when they are eligible to vote, boys’ interest overtakes that of girls (despite the interest of both groups growing with age).

Similar trends are seen in a recent US-based study published in the American Political Science Review which finds that not only do children see politics as a male-dominated space, but also that with age, girls increasingly see political leadership as a ‘man’s world’. The research also states that as a result of this, girls express lower levels of interest and ambition in politics than boys.

We need to make politics accessible for young girls

The example of the young girl who aspires to be the prime minister of New Zealand helped us realise the importance of portraying relatable role models for Indian girls. The global media has done a great job praising PM Jacinda Ardern, especially after her initial response to the pandemic.

This contributed to her becoming a role model for girls across the world. Further, research from the US shows that over time, the more that women politicians are covered in the national news, the more likely it is for adolescent girls to indicate their intention to be politically active.

Our survey also found that young people who were more exposed to politics—by participating in democratic processes in school or college and those who knew politicians personally—were more likely to express interest in politics than respondents who weren’t.

To make politics an aspirational career choice we need to break down narratives about young girls and political power. In the West, we see several examples of civil society organisations such as Teach a Girl to Lead and IGNITE National that prepare the next generation of women voters who are interested in becoming political leaders by introducing them to their local political representatives and hosting dialogues around politics.

Kuviraa aims to fill this gap in India by working with schools and nonprofits to deconstruct politics for young girls, building positive narratives for politics by highlighting women politicians as role models, and creating opportunities for them to engage with democratic processes that will ignite political ambition.

As we prepare for five state elections in 2022 and a general election in 2024, educators, civil society, and philanthropy must come together to create an enabling environment for young girls to be engaged in political processes as we cannot have a truly functional democracy without equal representation.

Shevika M is the founder of Kuviraa, a non-partisan initiative that aims to build political engagement and leadership in girls across India
This story was originally published by India Development Review (IDR)