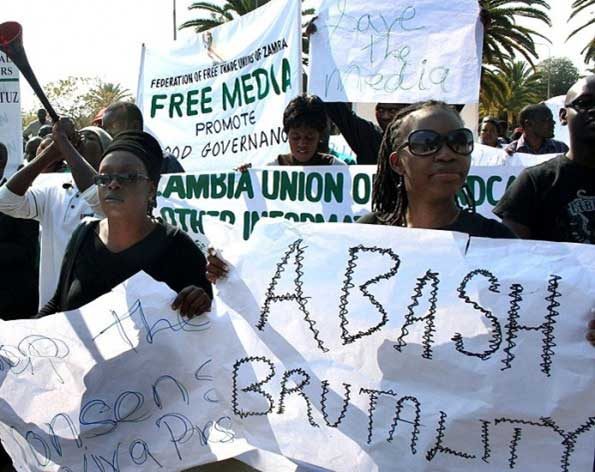 NEW YORK, Jan 4 2022 (IPS) - This past year, uncertainty blanketed our world. The COVID-19 pandemic, the rapidly advancing climate crisis, the pervasive nature of new technologies, and encroaching authoritarianism have all shown that our world is changing fast and in ways that fundamentally affect how we live.

As conspiracy theories laced with facts have spread to the general public, it is clear that we need reliable, independent information. We need journalists — the kind who hold the powerful to account and whose reporting serves as a bedrock for democracy. Yet, such journalists often face relentless, targeted attacks.

For 40 years, the Committee to Protect Journalists (CPJ) has assessed the state of press freedom worldwide and in 2021, the data speaks for itself. A record number of journalists were imprisoned: at least 293. CPJ also found that at least 24 journalists were killed in 2021 because of their coverage.

Eighteen more died in circumstances too murky to determine whether they were specifically targeted for their journalism. In tandem with expert partners, brave journalists, and allied public officials, we are pushing the boundaries of change for a free and fearless media.

Our #FreeThePress campaign, which is ever more vital, will be revamped in 2022 to push for a stop to these jailings. You can preview the at RiskLegal Network for Journalists, launching fully early next year to protect independent media from the lethal blows that deplete news organizations’ finances and stymie critical reporting.

We know it is possible to win when we fight together. Last year, CPJ helped win the release of 101 imprisoned journalists, the most we have ever helped free. This includes nearly 40 journalists released from prison in the Middle East and North Africa and 21 freed in Europe and Central Asia — specifically, in Turkey.

Part of our work is getting to the truth about journalist killings and advancing justice. In response to persistent impunity, together with partner groups we embarked on the first ever People’s Tribunal on the Murder of Journalists, a means of alternative justice to hold governments and perpetrators to account.

In 2022, we look forward to case hearings and six investigations into cold cases that can open a path toward justice. We need a Safer World for the Truth, as our project is called. Watch this short documentary to learn why it matters.

Among the victories that give us hope are the steps taken to halt the unfettered use of spyware to target journalists and others. Shortly after CPJ briefed the U.S. State Department on this threat, the administration placed export controls on several purveyors.

The EU also adopted a regulation on the export of dual-use surveillance technology by EU-based companies to prevent the undue targeting of journalists and others. We will continue advocating to stop the weaponization of tech across the world.

The historic crisis in Afghanistan required the collective effort of everyone at CPJ. We knocked on every door and strived to win the support of diplomats the world over, sometimes to our deep disappointment.

Yet, we are gratified by the successful evacuation of many journalists and our continuous work to keep the remaining Afghan press corps safe. Our experience with the Afghanistan crisis holds valuable lessons for our future advocacy.

A year that began with journalists viciously attacked at the Capitol riots in Washington, D.C. on January 6, culminated in a celebration of two journalists CPJ has long defended and cherished — Dmitry Muratov and Maria Ressa — who were honored with the Nobel Peace Prize.

Change takes time but it is essential. We are grounded in gratitude and hope.
In a polarized and frightened world, solid journalism — journalism that helps us to make informed decisions and to choose leaders who best represent our interests — shall prevail.

Thank you for standing with journalists and working alongside us to protect and uphold our vital freedoms.