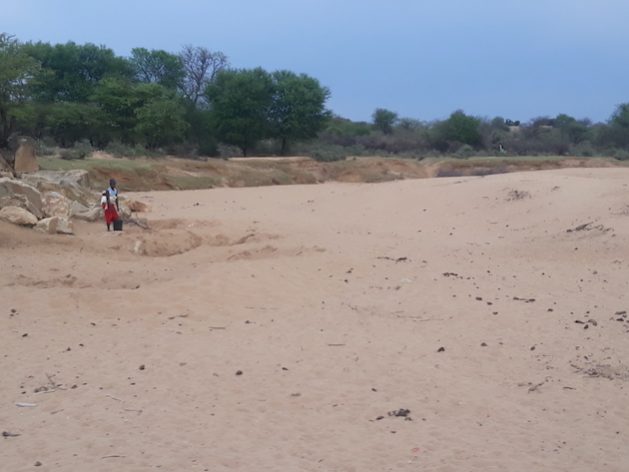 Climate uncertainty could mean an increase in conflicts as tensions arise over scarce resources, like water. Credit: Ignatius Banda/IPS

Bulawayo, ZIMBABWE , Feb 14 2022 (IPS) - When years ago warnings were sounded that future wars would be fought not over oil but water, the predictions were dismissed as alarmist.

Yet, as climate uncertainty upends water availability in Africa, researchers say conflicts arise among local communities and across borders over access to scarce water resources.

In a commentary released in January last month, the Global Water Partnership (GWP) called for immediate action from world leaders to provide resources and funds to tackle what the researchers say is the “worst drought in a generation in East Africa.”

The climate crisis has led to widespread lack of pastures, decimating livestock, and creating a humanitarian crisis.

East Africa has seen a cyclical climate crisis where a mix of floods and droughts has resulted in increasing calls for action from more affluent countries.

“In 2011, the last severe drought to affect this region killed hundreds of thousands, but since then and despite promises by the international community, little has changed,” GWP says.

And the statistics are pretty grim: one in every three people across Africa face water scarcity daily, and nearly 400 million people in sub-Saharan Africa struggle to find access to drinking water, according to the African Development Bank (AfDB).

As UN Water starkly put it, “on a global scale, half of the people who drink water from unsafe sources live in Africa.”

The United Nations Environment Programme (UNEP) estimates that US$100 billion needs to be invested annually towards climate adaptation in Africa by 2050, but that figure is far from being reached.

“The impact of the drought is devastating,” said Gianfranco Rotigliano, UNICEF Ethiopia Representative, adding that this has led to “major displacement out of affected areas.”

Researchers say these displacements have led to conflicts among communities over water.

“The lack of clean water is further exacerbating the situation for children and women. If children are forced to drink contaminated water, it puts them at risk to various diseases, including diarrhoea which is a major cause of deaths among children under five,” Rotigliano said.

Experts say increased collective action by African countries is required if richer countries act with the urgency demanded by the continent’s climate crisis.

“Africa countries should organise themselves to speak in one voice as a block. For Eastern Africa, a good example is the Intergovernmental Authority for Development (IGAD) which has set up a common approach to addressing issues especially related to climate change,” said Levis Kavagi, the United Nations Environment Programme’s (UNEP) Africa Regional Coordinator for Ecosystems and Biodiversity.

Last year, research commissioned by the humanitarian agency CARE International exposed the broken promises of what it said was a “decade-old pledge” of climate financing for developing countries.

“Water is often seen from the end-user point of view and its challenges, but the issues related to where the water comes from are often not given the limelight,” Kavagi said.

Amid those concerns, lobbyists are pushing for more action.

“There is no framework to hold rich countries accountable,” Simalabwi told IPS.

Former British Prime Minister Tony Blair wrote in February 2020, “between now and 2050, Africa’s population is set to double. This alone brings with it great opportunities but also new realities. If we are not able to find ways to support these countries to grow sustainably, all of our work for decades in the UK and globally will be in vain.”

Other experts, however, note that the delays by rich countries to act, go deeper.

“Rich countries may be reluctant to recognise, in financial terms, that Africa is disproportionately affected by anthropogenic climate change, including through water-related impacts because they could expose themselves to liabilities for billions of dollars in loss and damage payments,” said Nathan Mason, a research associate at the UK’s Overseas Development Institute.

“International NGOs, research and advocacy groups, and enlightened donors need to listen carefully to African counterparts, support their efforts and put them in the driving seat of funded programmes,” Mason told IPS by email.

For now, researchers remain concerned that not just East Africa but countries across the continent facing hunger and drought will have to wait a little bit longer for largess from rich countries as the climate-induced humanitarian crisis continues unchecked.