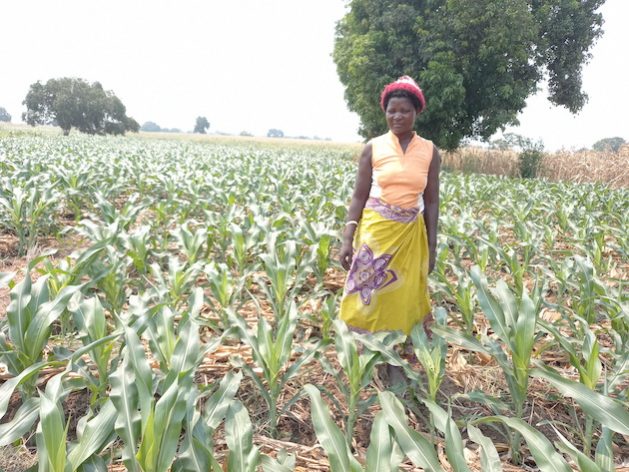 Fostina Kachimera in her maize garden that she planted under irrigation. Since she has started to use irrigation she no longer lives in fear of dry spells. Credit: Esmie Komwa Eneya/IPS

BLANTYRE, MALAWI, Feb 9 2022 (IPS) - In the past, the people of Sande Village in Chikwawa district, Malawi, would go to bed with empty stomachs even when the rest of the country harvested bumper yields.

This is because the area in southern Malawi is prone to both floods and drought – making rain-fed agriculture difficult.

One woman farmer, Fostina Kachimera, said that after practising rain-fed agriculture over several years without results, she stopped farming and was just sitting idle because agriculture was her only option for employment.

“When we try to do rain-fed agriculture is either the crops will be swept away by floods or burnt by drought before they even start to produce fruits,” she said.

Chikwawa and Nsanje districts are situated in the Shire River valley.

“In addition to that, its annual rainfall falls between 400 to 1000 mm, and this is below the average annual rainfall needed by most of the crops grown in the country,”  Mlewah says, explaining that optimal rainfall was above 1 200mm.

Then there is flooding.

“One-third of the land is situated along the country’s biggest river, and indeed farmers who cultivate their crops in these areas face floods almost every year,” he explained.

Now, this has become a song of the past because Kachimera and her fellow 259 farmers can now harvest three crops a year through irrigation. This has enabled them to produce enough food for the year and a surplus to sell.

All the farmers had also managed to build substantial houses which withstand floods – unlike in the past when floods often damaged their homes.

The Evangelical Association of Malawi came to their rescue in 2007 and introduced irrigation farming.

“We started as a club, but by 2010 we transformed into a scheme known as Sande.

“When we were starting, we were using water canes to irrigate our crops, but right now we are using water pumps which we purchased through the profits from irrigation farming, and almost every one of us has managed to buy one,” said the scheme’s chairperson Samuel Wise.

Apart from growing maize, the country’s staple food, Wise explained that the system produces different crops such as legumes, tubers, and vegetables.

According to him, the idea is to have diverse foods available to combat malnutrition and fetch reasonable prices on the market.

Once the irrigation started, the families started to live healthy lives.

They no longer lack necessities such as clothes, soap and can pay school fees for their children.

“In the past, transportation was so difficult for us since we could not afford even the cheapest bicycle, but now we have motorbikes that we bought with the farm proceeds,” he said.

“Finding the big area like this green is rare especially considering that this is the dry season, and these farmers made this place look like we are in the rainy season.”

Nkusankhoma encouraged them to register in the livestock subsidy program to add to what they are already doing because livestock production does well in these districts.

While the farmers relish their success, they lament the rising fuel prices. The water pumps are reliant on fuel – shrinking their profits.

The community will benefit from the Shire Valley Transformation Programme – a government-led project financed by World Bank, the African Development Bank, and the Global Environment Facility.

According to the project’s coordinator, Stanly Chakhumbira, the project put 43 370 hectares under irrigation using gravity to divert water from the river to the canals. Once this is completed, farmers will no longer need to rely on fuel.