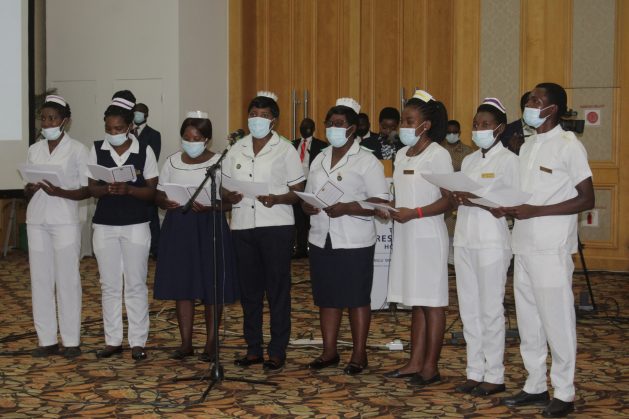 There is a critical shortage of qualified healthcare staff in Malawi to deal with the growing mental health burden in the country. Credit: Charles Mpaka

Lilongwe, Malawi, Dec 13 2021 (IPS) - When a former deputy speaker of Parliament shot himself dead within the National Assembly buildings in Lilongwe in September 2021, it shook Malawi. It also turned attention to the mental health burden in the country.

Experts say that a sharp rise in suicide cases has become the most visible expression of the burden of mental health challenges in Malawi.

“There’s depression, stress and many other silent forms of disorders. More often, we act quickly on a mentally challenged person because he is causing havoc,” says Harry Kawiya, a psychiatric clinical officer at the Zomba Mental Hospital, Malawi’s only referral mental health facility and one of the two specialised institutions in the country. “But the rising of cases of suicides recently tells us the severity of the mental health problem among us, which we are not adequately addressing.”

National police records show that suicide cases have increased drastically in Malawi over the past three years. For instance, between January and March 2021, the country registered 76 suicides – an increase of nearly 50 percent over the same period last year.

One police station in Lilongwe registers an average of six cases every month, the station’s spokesperson, Foster Benjamin, tells IPS.

“This is a steep rise, and it’s worrying,” he says. “The reasons [why people are committing suicide] range from family disagreements to financial troubles. In almost all the cases, those that kill themselves are men.”

The former deputy speaker, Clement Chiwaya, 50, left a suicide note detailing frustrations with sorting out benefits, including an official vehicle which he had bought, as the reason.

In a village just outside Lilongwe, a man hanged himself around last year due to debts related to his small-scale tobacco farm.

His wife, Christina Makwecha, says she lost her 43-year-old husband in October 2020 after the tobacco marketing season had just closed.

“We made heavy losses such that we could not pay some of the debts for labourers and the inputs we got from agro-dealers,” says Makwecha, a mother of four children.

One evening on her return from a village savings group meeting in the area, she found the man hanging in a tree in a field not too far from their home.

“It was then that I remembered that for almost two weeks before the incident, he had become increasingly restless, unusually angry and started skipping meals,” she says.

While the country is registering a rising number of suicides, many Malawians lack the awareness of mental health disorders that lead to people killing themselves, says Dr Charles Masulani, Chief Executive Officer of the St John of God Hospitaller Services Ltd, a Catholic Church mental health hospital in Malawi.

“Just as people would know where to go when they have malaria because there is a lot of knowledge about malaria, we do not know about mental health disorders in Malawi. So, people tend to struggle within themselves without seeking help from counsellors, faith leaders or therapists, or any other who would offer help,” Masulani says.

Records at the hospital show that it registered 7,671 mental health patient consultations last year – including 4,142 men and 3,529 women.

Experts say that the COVID-19 impact on businesses has worsened the high prevalence of mental health disorders in Malawi, and the government’s response has been falling short.

In 2017, the Office of Ombudsman investigation found glaring deficiencies in mental health management in the public health system.

It faulted the government for failing to fund district health offices adequately for them to be able to handle patients before sending them to the referral hospital.

The Ombudsman also blamed the Ministry of Health for the persistent acute shortage of psychiatric staff, which compromised the quality of care for patients with mental disorders.

The inquiry established, for instance, that in two districts in the central region, the mental healthcare worker to population ratio ranged between 1:80,840 and 1:558,470.

According to the report, the problem of staff shortage starts with how the training for doctors in Malawi is designed.

“Whilst the undergraduates are exposed to the different aspects of the medical profession including psychiatry, during the internship psychiatry is completely shunned thereby further depriving [the system of] additional and potential psychiatric staff,” reads the report.

The investigation further exposed inefficiencies in the procurement of psychotropic drugs for patients with mental disorders, leading to their unavailability most of the time.

Four years after the investigation, these challenges remain.

During the commemoration of World Mental Health Day in October, Dr Michael Udedi, a mental health expert in the Ministry of Health, admitted the critical shortage of specialised personnel in the public health system.

He said while the country does have some mental health clinicians and nurses in almost every district hospital of the country, there is only one psychiatrist based at Zomba Mental Hospital and no psychologist in public hospitals.

He also disclosed that in May this year, the Ministry of Health advertised vacancies to recruit psychologists; there was no response.

In addition, there is no dedicated budget for mental health, Udedi told IPS in an interview last week.

“Therefore, it is not easy to track the funding for mental health per se,” he says.

He, however, says the ministry does disburse some funding to the referral hospital. He also says it falls on district health offices to dedicate part of their funding from treasury towards mental health activities such as drug procurement.

In her report, the Ombudsman attributed the apparent lack of attention to mental health as a primary healthcare problem to a weak and old legislative framework.

The treatment of patients with mental disorders is catered for in the Mental Health Act passed in 1948 – when Malawi was still under British colonial rule.

“This law is out of touch with the current trends in mental health service delivery,” reads the report.

In 2000, Malawi developed its first National Mental Health Policy. But this too has had no significant impact on mental health service delivery. The policy has, thus, been under review.

Now the government hopes that the challenges in the sector will be addressed once a bill, currently being drafted, is tabled, and passed in Parliament, possibly in February next year.

The Mental Health Bill has a provision for ring-fenced mental health funding. According to Udedi, this is key to addressing most of the challenges in mental health.

“This will see to it that mental health is adequately funded. This would have an implication on human resources for mental health, that’s including support in training,” he says.

But Udedi also challenges communities to play their part in raising awareness, minimising stigma and discrimination towards people with mental health problems and linking such people with service providers for assistance.