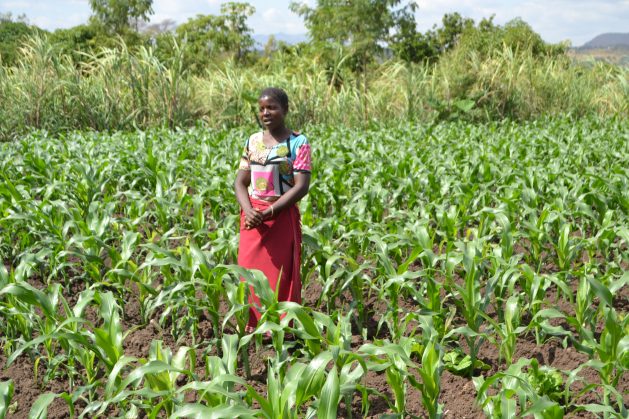 A maise farmer in her fields last year. This year small-scale farmers are anxiously waiting for an impasse between government and private traders to be resolved so they can get their subsidised fertiliser. Credit: Charles Mpaka/IPS

As the first rains start falling in some parts of the country, her anxiety is growing because she is yet to purchase fertiliser because she does not have any money.

Joseph, 63, is one of the 3.7 million farmers the government targets to benefit under the 2021 Agricultural Input Programme (AIP).

In this programme, the government subsidises fertiliser and seeds for small-scale producers who make up more than 80 percent of farmers in Malawi.

The programme has been running since 2005, and every year, it is saddled with challenges – like corruption, non-availability of goods at sales points and delivery hitches.

This year, these challenges are compounded by a rise in prices of fertiliser which shot up by nearly 100 percent.

The impact of the increase has trickled down to the farmers. For every $23 in government subsidies for a 50kg bag of fertiliser, the farmers are contributing about $9. Last year they paid $5.4.

And Joseph is feeling the weight of that rise on her shoulders. First, she needs money to redeem her two bags of fertiliser.

Then, because chaos is the norm at the agro-dealer shop in her area, she has to bribe the clerks or pay some youths to stand in the queue on her behalf. The more the days and nights they stand in the line for her, the more the money she needs to fork out.

Once she buys the fertiliser, she will have to hire a motorbike to transport the commodity to her home, some 17km away.

In total, she needs at least $28 to meet these expenses.

“I don’t have that kind of money, and I don’t know where to get it from,” she tells IPS. “I hope by the time the fertiliser comes, I will have found the money.”

In the previous years, she relied on the government-funded public works programme to earn a small wage. For the past two years, there haven’t been any projects in her area.

Amid the perennial challenges rocking the food subsidy programme intended to ensure food security in Malawi, the rise in fertiliser prices has been the most dramatic.

It all began in June, soon after Parliament passed the national budget in which the government allocated $172,000 towards the programme, targeting 3.7 million farmers – the same number as last year.

Following the hike in price on the global market, the cost of fertiliser increased in the country. Malawi was hit hard. It relies on imports because it does not have a fertiliser manufacturing plant.

In reaction, the Ministry of Agriculture, the implementing agency of the flagship food security programme, announced it would trim the number of beneficiaries.

“Due to financial constraints and the rising prices of fertiliser, the ministry, after looking into these two compound challenges, has decided to have AIP beneficiaries scaled down. It is therefore very necessary that the scaling down of the beneficiaries be done up to village level,” said the ministry’s secretary Sandram Maweru in a circular dated July 21, 2021 and addressed to all 28 district commissioners.

But a week after the district commissioner had submitted the revised data to the ministry, on August 21, President Lazarus Chakwera overturned the decision of his agriculture officials. He directed that no one who was on the list last year could be taken off.

“I will not allow anyone to remove any family or village from the list of beneficiaries,” he said.

And so began a tug of war between the government and private traders.

It told them it would buy their fertiliser for AIP at $29 per 50kg bag instead of the $43.6 per 50 kg which the private traders had set for it.

Efforts to resolve the standoff did not yield results. Last week, 13 of the 164 traders the government had engaged had not signed contracts to supply the fertiliser. This amounts to close to a million bags of fertiliser.

In a statement in Parliament on November 18, Minister of Agriculture Lobin Lowe insisted it was up to the traders to take it or leave it while admitting that only 10 percent of the targeted 371,000 metric tonnes had been procured.

The private traders account for 66 percent of the commodity, while two public agencies supply 34 percent for the programme.

However, the fact that 151 traders have signed the contract does not guarantee that the fertiliser will be supplied, indicates Mbawaka Phiri, Executive Administration Officer for the Fertiliser Association of Malawi, a grouping of the private traders.

“Caution must be taken to not assume that all 151 traders have stock and can supply. Many of those who have signed contracts are still having difficulty procuring stock,” she says.

According to Phiri, some private traders have decided not to participate in the programme this year because the AIP fertiliser price is too low to do business.

Traders are not obliged to sign the government’s contract offer – that is a business decision.

Agriculture policy expert, Tamani Nkhono-Mvula, says in general, the implementation of the programme this year has not been satisfactory.

“This is November, and we have less than 10 percent of the fertiliser supplied when we were supposed to have at least 50 percent of the farmers reached by mid-October. Once rains start in a matter of weeks, that will compound the logistical challenges we already have,” he says.

He says the programme is crucial because it targets low-income farmers who cannot afford the farm inputs, but its management is concerning.

“It seems the programme has become a way for some people to make money. They would love to see chaos in the programme because that is the way they are able to benefit,” says Nkhono-Mvula.