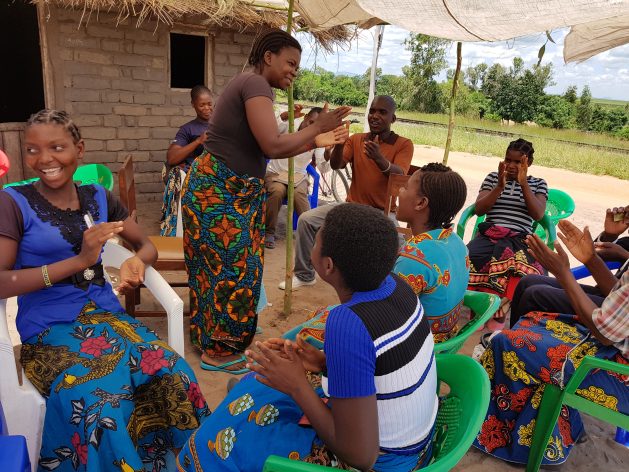 A group of youths engaged in various activities in Machinga, Malawi, to prevent and help in fighting trafficking of children from the area to Mozambique. Credit: Charles Mpaka/IPS

BLANTYRE, Malawi, Oct 6 2020 (IPS) - In August, police intercepted the trafficking of 31 people to Mozambique. The victims, all Malawians, included 17 children and 6 women. Their two traffickers, also Malawians, had coerced them from their rural village in Lilongwe district with a promise of jobs in estates in neighbouring Mozambique. But they were saved in large part thanks to their own community.

According to Malawian police, they incepted the trafficking after a tip-off from members of the community. This, the police say, is one of the fruits of using community policing to fight crime in Malawi. National spokesperson for the Malawi Police Service, Assistant Superintendent James Kadadzera, says the police owe many of their crackdowns on trafficking to the community policing system.

In Malawi, community policing is not vigilantism. It is a system where the police organise voluntary members of the community to form groups to detect crime and alert police for action.

“They are our eyes in places we are not present. They complement the efforts of our detectives. They sensitise fellow community members on safety and security issues,” Kadadzera tells IPS.

The Trafficking in Persons Act of 2015 provides for increased participation of individuals, institutions and communities in preventing human trafficking.

Involving communities in anti-human trafficking efforts means the crime can be tackled at its source and that trafficking transit routes are shut down.

However, after years of campaigning and a raft of frameworks and initiatives such as community policing, Malawi still ranks high as a source, destination and transit country for human trafficking.

A 2020 Trafficking in Persons Report for Malawi by the United States’ Department of State recognises Malawi’s “significant efforts” to combat human trafficking. But it says Malawi “does not fully meet the minimum standards for elimination of trafficking”.

The report highlights the case of Nepali women who were trafficked into Malawi last year, which  illustrates the fraudulent white-collar practices that are aiding trafficking here.

According to the report, there are credible reports of official complicity by police and immigration officials in the trafficking of the women into Malawi.

Even worse, the government transferred the whistleblower in the case, reportedly to prevent him from further investigating the crime and exposing the officials involved.

“In two sensitive cases,” says the report, “judges granted traffickers bail, and, in one case, there were credible reports that the trafficker continued to recruit women for labour trafficking in the Middle East while awaiting trial.”

McBain Mkandawire is executive director for Youth Net and Counselling (YONECO), which works with youth who are prime targets for traffickers for labour and prostitution purposes.

He says Malawi is struggling to combat human trafficking because of “a combination of the complicity of government officials and the rich at the top and high poverty levels at the bottom”.

Human trafficking is a lucrative business for the rich and the powerful, Mkandawire says.

“This is a big money industry. High profile people facilitate it in one way or another. They finance it and frustrate justice because they profit from the misery of the poor,” Mkandawire tells IPS.

For example, he says, the estates where these people are trafficked to are not owned by poor people.

“Those estates are owned by the rich and the powerful. They know how their labourers are recruited. They facilitate the crime because they are profiting from the poor through cheap labour and poor working conditions. And they will do anything to frustrate efforts to eradicate human trafficking,” Mkandawire says.

He adds that through his organisation’s work on youth programmes around the country, apart from the public ignorance on how human trafficking works, high levels of poverty make Malawians easy prey for traffickers who lure them with false promises of better lives elsewhere.

In Machinga district in southern Malawi, child trafficking is one of major concerns for the community-based Youth Response for Social Change (YRSC). The youth organisation is located in a rural town in Machinga district on the border between Malawi and Mozambique. The remote town is the exit point out of Malawi via the main railway line to Nacala Port in Mozambique.

Here, together with traditional leaders and the police, YRSC battles the trafficking of Malawian children to work in tobacco estates in Mozambique. Executive director for YRSC Lamecks Kiyare tells IPS the problem worsens during the months of August to November when the farming season begins in Mozambique.

He admits they face daunting challenges.

“It’s not easy. We face a barrage of challenges such as poor stakeholder coordination, lack of political will among community leaders and no financial resources to support the repatriated children,” Kiyare tells IPS.

According to Maxwell Matewere, the national project officer in the United Nations Office on Drugs and Crime (UNDOC) in Malawi, combating trafficking remains a pipe dream as long as Malawi does not address the underlying causes.

Matewere says while the police have demonstrated some positive responses in arresting offenders of human trafficking and taking them to court for prosecution, the courts themselves are not swift and bold in handling trafficking cases.

“The lower courts continue to apply the law with kindness and favour on the offenders. We are registering increasing number of cases whose convicts have received suspended sentences other than imprisonment. No one can learn anything,” he says.

YONECO has its own experience with the courts. It has been pursuing the trafficking of a young woman to a hospitality facility within Malawi.

The suspects first appeared court in February 2019 but to date the magistrate is yet to set a date for trial.

“We are not told the reasons for this lack of progress. Meanwhile, the trafficker is on bail, roaming around, perhaps trafficking more people in his freedom,” says Mkandawire of YONECO.

The Registrar of the High Court and Supreme Court of Appeal, Agness Patemba, did not respond to IPS’ questions regarding complaints about the courts’ handling of human trafficking cases.

However, issues of frustration over the delivery of justice in general by Malawi’s court system are well known. The Judiciary itself admits this in its Strategic Plan (2019-2024). It highlights poor work ethics among judicial officers and members of staff, corruption and delayed judgements among the threats to justice delivery.

But perhaps a more stirring and direct expose of the malpractices in the fraternity has come from the judiciary’s own senior judge, Esmie Chombo. In January 2018, the High Court Judge and Judge President for the Lilongwe Registry wrote a strong letter to the Malawi Law Society, outlining abuses of court processes by lawyers.

She further accused them of bribing court clerks to prioritise their work and remove from court files documents from opposing parties in order to mislead the court. There were also accused of bribing clerks to misplace or destroy case files in order to frustrate court proceedings.

She therefore called on judges and the lawyers’ body to swiftly uproot “these obnoxious practices before they take deep roots”.

Mkandawire says challenges of this kind are endemic and entrenched in the levels that hold the key to ending injustices in Malawi.

He says communities and other low-level groups can do their part. But official collusion makes Malawi’s fight against human trafficking a complex task.

“Until we get rid of corruption at every level and in every place, until we comprehensively tackle the root causes of human trafficking, this crime will remain a serious problem for us for a long time,” he tells IPS.