The following feature is part of series to mark International Women’s Day, March 8. 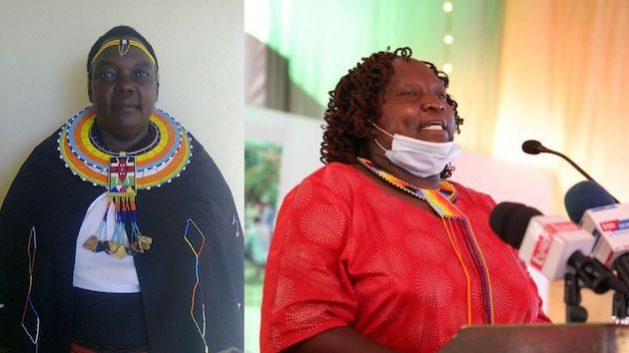 Despite being a well-known peace champion in the community, women’s leader, and crusader against Female Genital Mutilation (FGM), she had no place, let alone voice, in what was meant to be a consultative meeting.

“I did what a woman in our pastoral community is required to do, stand up and quietly wait until the men in charge saw it fit to give me an opportunity to speak. Everyone in the room was seated, but I remained standing. I needed to speak on behalf of women and children who are most affected by insecurity and conflict,” Lokichu, director of Pokot Girl Child Network, tells IPS.

Lokichu was immediately granted an opportunity to address the gathering and would later become a nominated Member of the County Assembly, West Pokot, in Kenya’s devolved system of governance.

Her experience is not far from that of Joyce Nairesia, the first Samburu woman to join the Council of Elders and chair such a Council.

She tells IPS that male elders lift a traditional rungu (club) during Council meetings while addressing the Council as a show of power. Being a woman in a pastoralist community, she cannot do the same.

“To address the Council, I first stand up, lift a piece of grass, and wait to be permitted to speak. This is a show of respect and humility in their presence,” she says.

“People say, but how is this possible? I say it is better to influence change from within than from outside looking in.”

As the world marks yet another International Women’s Day on March 8 under the theme ‘Break the Bias’, communities across this East African nation are far from a gender-equal world.

A world free from bias, stereotypes, and discrimination and one where gender equity and inclusivity is freely and widely embraced.

Gender experts such as Grace Gakii, based in Nairobi, say that the world faces a myriad of challenges from climate change, diseases, pandemics, food insecurity and fragile peace. Calls for gender equality and equity in all facets of life are crucial to improving social and economic outcomes.

“We have to uproot deep-rooted patriarchy and misogyny as well as the systematic discrimination of women in political leadership and in business,” Gakii, a researcher in gender equality and equity, tells IPS.

UN data on women in politics shows that Rwanda has the highest percentage of women in parliament globally. South Africa, Senegal, Namibia and Mozambique also made it to the top 20 list.

“Rwanda is also one of 14 countries in the world to have 50 percent or more women in their cabinet. But what is becoming increasingly clear is that representation is not enough. Women need the influence to change how the society perceives men and women, and the roles they assign to them,” Gakii explains.

Only 3 percent of African female cabinet members are in charge of critical and highly powerful dockets in finance, defence, infrastructure, and foreign affairs.

Even in business and the corporate world, where Africa’s firms have the highest percentage of female representation on company boards at 25 percent compared to the global average of 17 percent, according to McKinsey Global Institute, Gakii says it is not enough.

“Women are increasingly represented, but their influence is limited. There is no real impact and progress towards gender parity if participation and influence do not go hand in hand,” she says.

“The global average of women in executive committee is 21 percent. Africa is ahead at 22 percent, with South Africa having the highest percentage of gender parity. It is not enough that women are seen in positions of power. Power must be felt for there to be a paradigm shift in the collective societal conscience.”

In recognition of these facts, in February 2021, the African Union (AU) Ministers in charge of Gender and Women’s Affairs adopted the Common African Position (CAP) to advance women’s full and effective participation and decision making in public life.

The AU says that due to existing gender gaps in leadership roles across financial, investment and entrepreneurial markets, the African continent loses over 20 percent of its GDP every year.

Gakii says women must rise to power and influence in politics, business, religion, and institutions of higher learning for them to push gender boundaries in a consistent, systematic and impactful manner.