Can 70% of the World’s Poor Celebrate International Women’s Day? 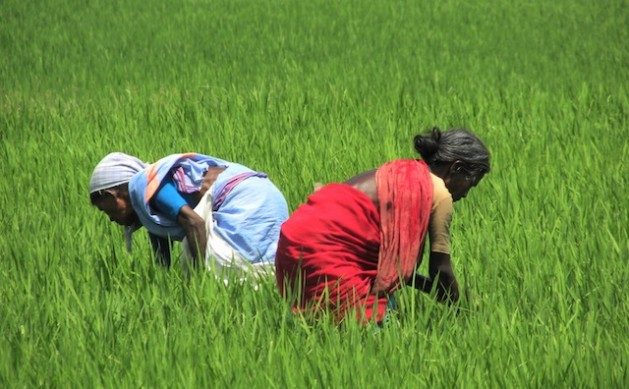 Women predominate in the world's food production (50-80 per cent), but they own less than 10 per cent of the land. Credit: Jency Samuel/IPS

MADRID, Mar 7 2022 (IPS) - The picture is gloomy: not only do women represent 70% of the 1.3 billion people living in conditions of poverty, but also up to 40% of the poorest households in urban areas are headed by women.

Should this not be enough, please know that:

The above staggering data come from the UN on the occasion of the 8 March International Women Day.

Despite all that, the UN goes on, women and girls are effective and powerful leaders and change-makers for climate adaptation and mitigation.

“They are involved in sustainability initiatives around the world, and their participation and leadership result in more effective climate action.”

Continuing to examine the opportunities, as well as the constraints, to empower women and girls to have a voice and be equal players in decision-making related to climate change and sustainability is essential for sustainable development and greater gender equality.

“Without gender equality today, a sustainable future, and an equal future, remains beyond our reach.”

For its part, the UN Women underlines that advancing gender equality in the context of the climate crisis and disaster risk reduction is one of the greatest global challenges of the 21st century.

“The issues of climate change and sustainability have had and will continue to have, severe and lasting impacts on our environment, economic and social development. Those who are amongst the most vulnerable and marginalised experience the deepest impacts.”

Women are increasingly being recognised as more vulnerable to climate change impacts than men, as they constitute the majority of the world’s poor and are more dependent on the natural resources which climate change threatens the most, adds UN Women.

According to this United Nations entity in charge of promoting the rights of women worldwide, “Without gender equality today, a sustainable future, and an equal future, remains beyond our reach.”

The theme for International Women’s Day is aligned with the priority theme for the upcoming 66th Commission on the Status of Women (CSW66): “Achieving gender equality and the empowerment of all women and girls in the context of climate change, environmental and disaster risk reduction policies and programmes”.

Women’s equal participation and leadership in political and public life are essential to achieving the Sustainable Development Goals by 2030. However, data shows that women are underrepresented at all levels of decision-making worldwide, and achieving gender parity in political life is far off.

Equality out of reach

In another report, UN Women says that with the latest data, we now understand the vital link between gender, social equity and climate change, and recognise that without gender equality today, a sustainable future, an equal future, remains out of reach.

“Women and girls experience the greatest impacts of the climate crisis as it amplifies existing gender inequalities and puts women’s lives and livelihoods at risk. Across the world, women depend more on, yet have less access to, natural resources, and often bear a disproportionate responsibility for securing food, water, and fuel.”

As women and girls bear the burden of climate impacts, they are also essential to leading and driving change in climate adaptation, mitigation and solutions.

“Without the inclusion of half of the world’s population, it is unlikely that solutions for a sustainable planet and a gender equal world tomorrow will be realised.”