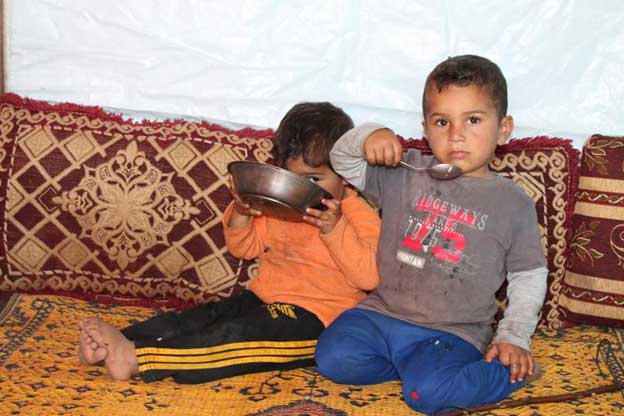 The food crisis in the Middle East, which began with the COVID-19 pandemic, has worsened with the war in Ukraine. Credit: UNICEF Middle East and North Africa Regional Office

BERLIN, Mar 30 2022 (IPS) - In a short period, the war in Ukraine has already had a major effect on the world economy. The United States and the European Union have levied sanctions on an unprecedented scale against Russia, energy prices have skyrocketed, and with the Black Sea closed, the world’s most fertile region is no longer linked to its markets. This will cause an appreciation of food prices that could wreak havoc in the European periphery.

Russia and Ukraine are important sources for raw materials that are now all but shut off from the world economy. Ukraine, for example, exports about half the world’s supply of semiconductor-grade neon, hitting an industry that had already been plagued by pandemic-related shortages.

While this bears the potential to significantly appreciate manufactured goods from cars to consumer electronics, it is primarily industrialised nations that will shoulder the costs.

The war’s impact on the Middle East

Rather, it is the war’s effects on the food prices that should really worry us. Russia and Ukraine boast some of the most fertile soil in the world, making them world-leading exporters of agriculture produce. Especially grains and oil seeds can be produced here at relatively low cost, and in close proximity to their main export markets.

Many countries are highly dependent on basic foodstuffs from Russia and Ukraine, especially those in the Middle East.

Egypt imports almost 70 per cent of its wheat from Russia and Ukraine. In 2019, 73 per cent of the Egyptian population benefitted from bread subsidies, an enormous strain on public finances. But attempts to cut subsidies run a high risk of causing unrest.

The country has already banned the export of several foodstuffs and is currently seeking new sources for wheat and vegetable oil. It is unlikely, however, that Egypt will be able to finance new imports on its own.

Tunisia and Lebanon both import about half their wheat from the Black Sea region. While the former is still grappling with the recent power grab by President Saied, the latter is more politically fractured than ever. Since the Lebanese Central Bank’s ponzi scheme imploded, the country’s currency has been in free fall.

The Lebanese government has already petitioned the US for $20 million in order to buy grain on the world market. And with grain silos diminished to only a quarter of their previous capacity after the explosion in the port of Beirut, food security in Lebanon is precarious to say the least.

Turkey is highly dependent on Russian and Ukrainian wheat as well, with 64.5 per cent and 9.6 per cent of its imports respectively. Even if the Turkish government is able to negotiate sanctions wavers for food imports from Russia, the prospect of rising food and energy prices poses an existential threat to President Erdogan, who currently presides over a historic economic downturn and hopes to be re-elected in the coming year.

Adding to pre-existing fiscal worries in most Middle Eastern countries, two years of a global pandemic only exacerbated the economic crisis. Thus, the current situation has the potential to spell chaos in the region. Research suggests that there was a direct link between rising food prices and the protests that led to the Arab Spring.

Even though food shortages and higher prices were not the reason for every protest, they undoubtably were a contributing factor that triggered pre-existing grievances. It is no coincidence that ‘bread’ was one of the three demands all Egyptian protesters during the revolution rallied behind.

With the pre-Arab Spring political order more or less restored, the people may not have the degree of participation, but they at least demand a decent life. If this becomes unattainable due to drastically rising costs of living, however, the fragile ruling bargain may erode sooner rather than later. This time, regimes across the region are prepared, but suppression and co-optation can only buy time, and conflicts are becoming more likely with each passing week.

The implications for Europe

It is, however, not just the Middle East region that will face major challenges. As has already been seen in the aftermath of the wars in Syria and Libya, European actors will also once again be confronted with new migration movements – a situation that has already put European unity to the test several times in the past.

Since the coming food shortages may last up to two years, the southern periphery of Europe can also once again expect to see people leaving their home countries in the face of war, hunger, and a lack of prospects. As Emanuel Macron recently emphasised, all EU member states must already take precautions to cope with or ideally cushion developments in the Middle East.

To this end, the EU’s biggest member states in particular must launch new aid programmes at the national and international level, and it is not only EU structures that need to act. The involvement of international organisations such as the FAO, the WFP, or the World Bank can also be helpful in ensuring that the necessary funds reach the affected countries.

Moreover, as almost all agricultural areas in the region will come under pressure from climate change and water stress, the EU’s agricultural policy needs to be reconsidered and connectivity with the Middle East strengthened. This can happen especially in the areas of water-saving cultivation options, but also in the planting of heat-resistant grain varieties.

Since the food crisis is also a fiscal challenge, emergency financial programmes must be set up in addition to food supplies to provide timely assistance to countries such as Egypt, Jordan, Lebanon, and Yemen to stabilise their national budgets. This must also take place with the involvement of the regional players – first and foremost the Gulf monarchies, which are in a good financial position.

The international community needs to coordinate

Against the backdrop of the past from 2011 onward, states such as Saudi Arabia, the United Arab Emirates, and Kuwait have no interest in a new destabilisation of their own environment. Therefore, a united ‘coalition of the willing’ is likely to be in the interest of both sides.

At the same time, Western actors in particular must coordinate their efforts, since ‘hoarding purchases’ by individual states would lead to new shortages on the world market, which would not least provoke new international disagreements.

The example of Egypt also shows that international actors need to take action not only at the governmental level. Since the Al-Sisi government in Egypt is now moving to buy yields from their own agriculture, rural areas and the poorer classes in particular are likely to suffer from the shortages.

To prevent this, nutrition programmes must have much better access to these population groups and also be better funded. This also applies to humanitarian aid deliveries to countries such as Syria or Yemen, which are also suffering from wheat price increases and will be threatened by shortages in the future.

If Western and regional actors were not able to jointly master this tour de force and initiate measures in a coordinated manner, Russia and China in particular would be left holding the reins of power. While China is replenishing its own stocks on a large scale from Russia and other exporting nations, Russia has meanwhile moved to restrict exports of products such as wheat or vegetable oil.

Both are measures designed to increase pressure on Western states, as Russia’s victory in Ukraine and on the international stage is a long way off.

For the Middle East, inaction would mean one thing above all: a new phase of massive destabilisation that would ultimately affect governments as well as the socially weaker population. As was said in the days of the French Revolution, if the population has no bread, those in power are threatened with disaster.

Source: International Politics and Society, based in the Friedrich-Ebert-Stiftung’s Brussels office.

Stefan Lukas is a Middle East analyst in Berlin and has been a guest lecturer at the German Armed Forces Command and Staff College in Hamburg since 2019; Marius Paradies is a researcher in international affairs who focuses on security and political economy in the Middle East.