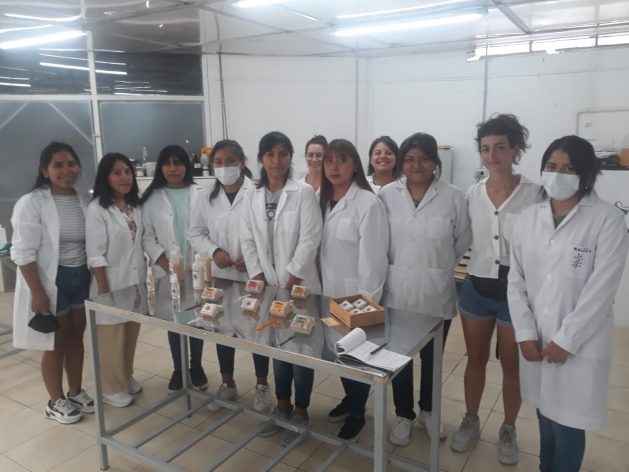 Part of the team of young entrepreneurs of the Maleza Cosmética Natural cooperative pose for photos at their laboratory in the Villa Lugano neighborhood in southern Buenos Aires, Argentina. CREDIT: Daniel Gutman/IPS

BUENOS AIRES, Mar 2 2022 (IPS) - “We started making shampoos and soaps in the kitchen of a friend’s house in 2017. We were five or six girls without jobs, looking for a collective solution, and today we are here,” says Letsy Villca, standing between the white walls of the spacious laboratory of Maleza Cosmética Natural, a cooperative that brings together 44 women in their early twenties in the Argentine capital.

Maleza has come a long way in a short time and currently produces 400 bottles of shampoo and 600 bars of soap a week, as well as facial creams and makeup remover, among other products. They are sold across Argentina through the cooperative’s own digital platform and other marketing channels.

The cooperative is a powerful example of the so-called popular economy, through which millions of people unable to access a formal job or a bank loan fight against the lack of opportunities, in the midst of the overwhelming economic crisis in this South American country, where more than 40 percent of the population of nearly 46 million people lives in poverty.

The National Registry of Workers in the Popular Economy (Renatep) lists 2,830,520 people who earn their living from street vending, waste recycling, construction, cleaning, or working in soup kitchens.

A glance at Renatep provides a reflection of which social groups face the greatest disadvantages in the labor market, as there is a majority of women (57 percent) and young people between 18 and 35 years of age (62 percent).

The picture is completed when the numbers are compared with those of registered private sector wage-earners, where both women and young people are in the minority – 33 and 39 percent, respectively.

As part of its social assistance program focused on supporting the popular economy, the Ministry of Social Development granted Maleza a subsidy that enabled it to purchase the glass tubes, thermometers, oil extractors, steel tables and office equipment that today furnish what was once the dismantled warehouse of an old factory.

The young women rented the 213-square-meter premises in January 2021.

By moving out of the kitchen of a house and into a spacious, well-conditioned place of their own, they were able to increase production by 500 percent due to better working conditions and the possibility of stockpiling raw materials.

It took the young women themselves three months to renovate the property, which now has a meeting room, offices, bathrooms, dressing rooms and a large laboratory. 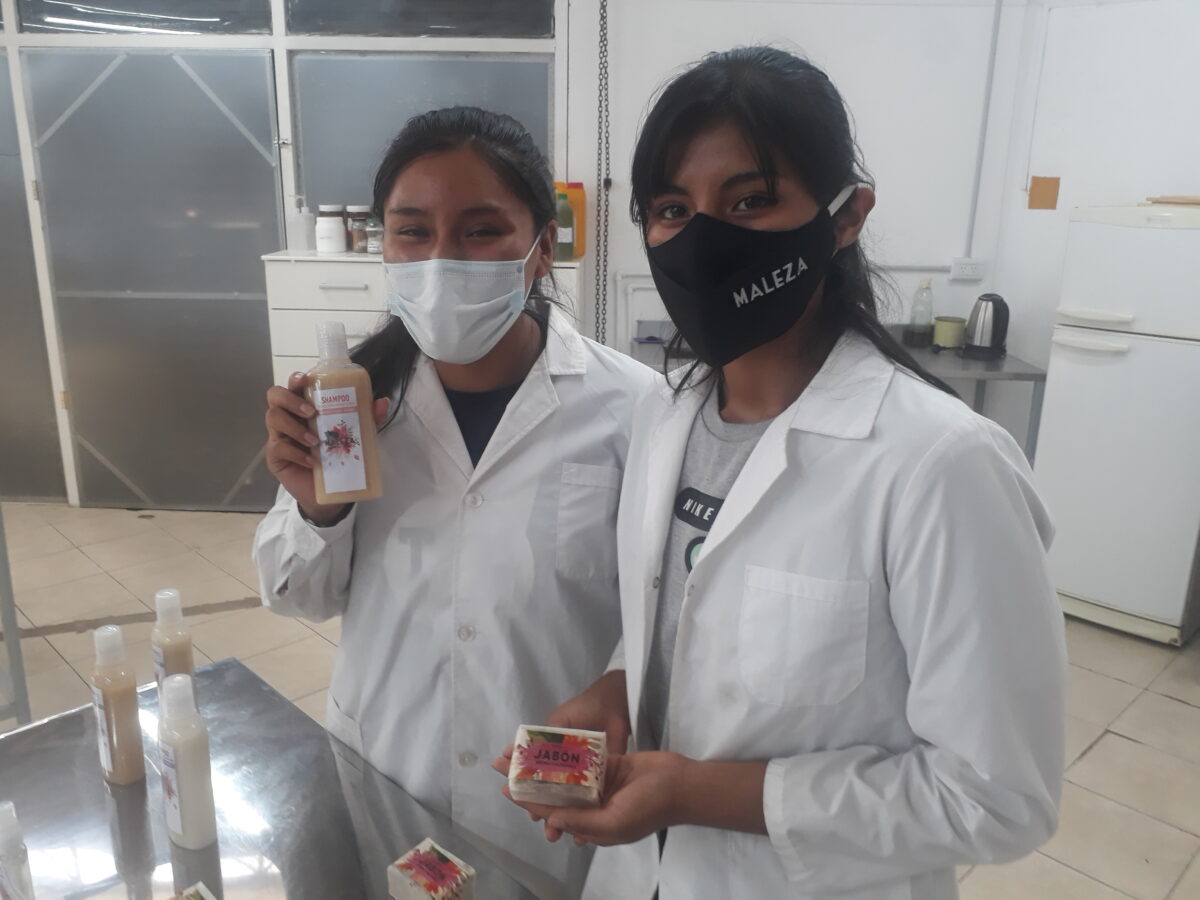 Letsy Villca (left) and Brisa Medina show some of the products made by Maleza. The members of the cooperative work four hours a day for an income equivalent to half the minimum monthly wage, paid by an employment incentive program of the Ministry of Social Development, whose amount will change as their business begins to make a profit. CREDIT: Daniel Gutman/IPS

“’Maleza’ or weed is a plant that is pulled out of the ground and grows back again. A plant that is rejected, but resists, because it is strong and always grows back. That’s why we chose the name,” Brisa Medina, 22, explains to IPS.

The project goes beyond production: the cooperative’s laboratory is also a space for social and community meetings to fight for rights and generate collective awareness.

Maleza’s facility is located on the southside of the city of Buenos Aires, in Villa Lugano, a neighborhood of factories and low-income housing, far from the most sought-after areas of the Argentine capital.

The members of the cooperative – mainly women but also two men – live some 25 blocks (about 2.3 kilometers) from the plant, in Villa 20, one of the city’s largest shantytowns, home to more than 30,000 people.

Most of those who live in Villa 20 are Bolivian and Paraguayan immigrants who work as textile workers for clothing manufacturers in precarious workshops set up in their own homes.

The trade is passed down from generation to generation, as are the harsh working conditions, in exchange for remuneration that is fixed unilaterally by the buyers, without the right to negotiate.

“We wanted to do something else: to have a project that was our own, that we liked, with a decent place to work, that would allow us to study and where we could use our knowledge, because many of us were classmates at a chemical technical school, but it is almost impossible to find a job,” Letsy, 22, tells IPS.

To their technical know-how, acquired through different courses after high school, the young women at Maleza added the ancestral knowledge handed down by their families, to manufacture cosmetics that are free of polluting chemicals and are produced in an environmentally friendly way.

“Since I was a child, I used to watch my mother prepare and sell medicinal herbs and natural products. That’s when I started to learn,” says Ruth Ortiz, who is 23 years old and has a four-year-old daughter.

Ruth adds that the goal was to make a product with which they could dream big in terms of sales, as many in the Villa earn some extra income by baking bread or cooking meals, but sell their goods only to neighbors.

“As soon as we felt ready, we started selling at street fairs and gradually improved our products and packaging,” she says. 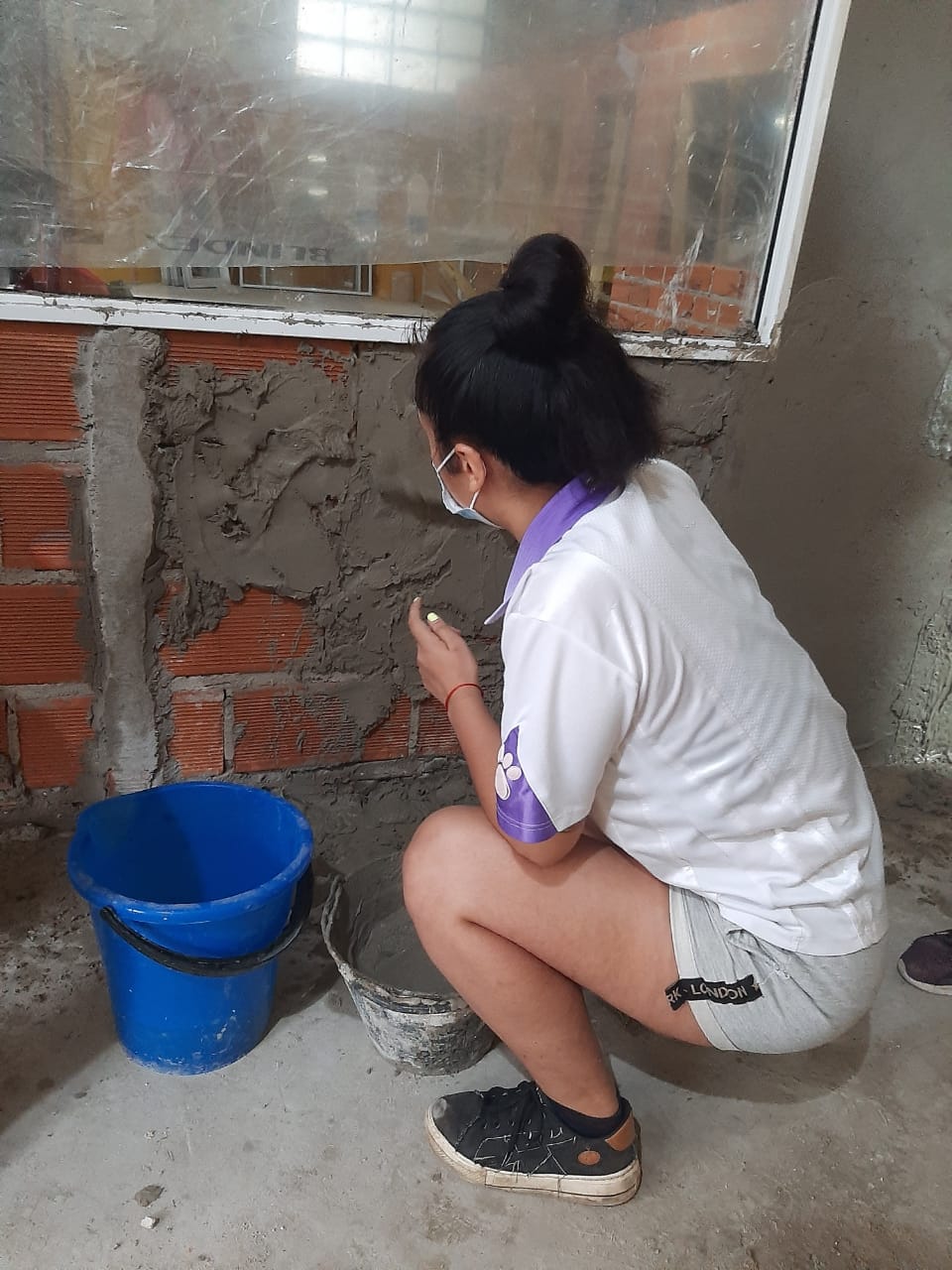 The image is from a year ago, when the young cooperative members renovated the warehouse of an old factory to turn it into a cosmetics laboratory. CREDIT: Courtesy of Maleza Cosmética Natural

For many of them the cooperative was more of a necessity than a choice, she acknowledges: “It is very difficult for anyone to get a job, but it is harder for people from the Villa. When you say where you live, they don’t want to hire you.”

Ruth is the only member of the cooperative who is a mother. She started working when her daughter was an eight-month-old baby. She often takes her to the laboratory and they all take turns caring for her, since one of the fundamental premises of Maleza is that women should be able to work outside the home, generate their own income and not be caught in the trap of unpaid housework.

Brisa, who used to work as a cashier in a hairdresser’s shop, was left without a job in March 2020, when the COVID-19 pandemic broke out and all non-essential businesses in Argentina were ordered to close. “Maleza was my salvation,” she says.

After the socioeconomic catastrophe of the first year of the pandemic, 2021 was a year of economic recovery in Argentina, although marked by an alarming level of precariousness in labor: official data show that almost three million jobs were created last year, but almost all of them are unregistered employees (1,329,000) and self-employed (1,463,000).

Informal or unregistered and self-employed workers are also the hardest hit by the loss of purchasing power in an economy with an inflation rate of over 50 percent a year.

Against this backdrop, Maleza is looking for a way forward. The factory’s current income is enough to pay the rent of the laboratory plus electricity, water and internet services and other expenses, but still not enough to pay the members wages. 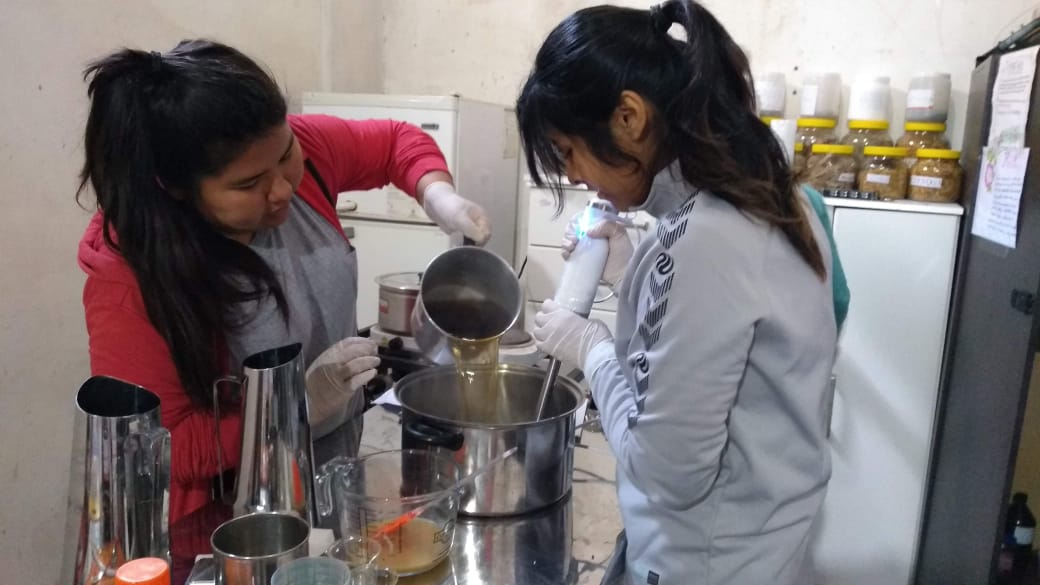 Many of the young women in Maleza’s cooperative were classmates at a technical-chemical school and are using what they learned, as well as the knowledge about medicinal plants passed down to them by their families. CREDIT: Courtesy of Maleza Cosmética Natural

“We are looking for ways to lower costs and increase profitability. Although sales have not yet reached the levels we believe they could, we are making progress in advertising and opening new marketing channels, so we hope to turn a profit by the middle of this year,” Julia Argnani, another member of the cooperative, tells IPS.

Today, Maleza is divided into four work areas: administration, production, marketing and communication, which includes the design and administration of social networking. It also seeks to be a tool for empowering other social cooperatives, by delivering, for example, its products in reusable bags manufactured by another group of women.

All the members of Maleza have a fixed income thanks to the fact that they are beneficiaries of Potenciar Trabajo, a plan for socio-productive inclusion and local development administered by the Ministry of Social Development.

The program gives Renatep registrants half of Argentina’s minimum wage: 16,500 pesos (approximately 150 dollars) a month, in exchange for a four-hour workday.

In this Southern Cone country, 45 percent of the population receives some form of social assistance through a vast network that includes direct economic assistance, food aid, subsidized electric and gas rates and vocational training.

In the case of Potenciar Trabajo, it is currently paid to 1,200,000 informal sector workers, according to data supplied to IPS by the Ministry of Social Development. The 150 dollars a month they are given amounts to a quarter of the income needed to keep a family of four out of poverty, according to the official statistics institute.

“Our goal is also to be proud of where we started from and to show that a women’s cooperative like ours can make quality products,” Julia explains.