Families carry their belongings through the Zosin border crossing in Poland after fleeing Ukraine. The number of refugees worldwide has risen markedly in the recent past, reaching a record high in April 2022 of more than 30 million. Credit: UNHCR/Chris Melzer

PORTLAND, USA, Apr 11 2022 (IPS) - Twilight for the 1951 Refugee Convention is becoming a 21st century reality for an increasing number of countries worldwide.

Since the Convention’s adoption, the world’s population has more than tripled and is now approximately 8,000,000,000 people. The planet’s population growth is expected to continue and likely increase to 10,000,000,000 human inhabitants around mid-century. Nearly all of that demographic growth is projected to take place in developing countries, many of which face resource scarcity, difficult living conditions, and socio-political turmoil.

The world is also experiencing record levels of refugees, asylum seekers and persons displaced across borders. The number of refugees worldwide has risen markedly in the recent past, reaching a record high in April 2022 of more than 30 million.

That global figure includes 21 million refugees under UNHCR’s mandate and 6 million Palestinian refugees under UNRWA’s mandate as well as 4 million people as of mid-April who fled Ukraine due to Russia’s invasion. Today’s global number of refugees is rapidly approaching a three-fold increase since the start of the 21st century (Figure 1). 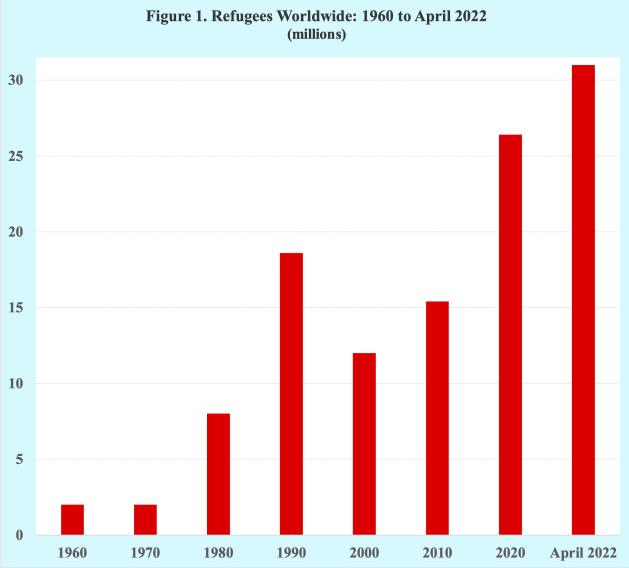 In addition to the more than 30 million refugees, 4 million Venezuelans are displaced abroad. Also, more than 4 million people are asylum seekers, with the global level of asylum claims having increased four-fold over the levels a decade ago.

In the aftermath of World War II and the beginning of the cold war, the Refugee Convention was drafted and signed by the United Nations Conference of Plenipotentiaries on the Status of Refugees and Stateless Persons, held at Geneva from 2 to 25 July 1951.

The Convention and its subsequent 1967 Protocol Relating to the Status of Refugees provide the foundation for today’s international refugee regime. They are the primary international legal documents that define the term “refugee”, outline the rights of refugees and responsibilities of countries, and indicate the institutions protecting refugees.

Article 1A(1) of the Convention defines refugee as someone who is unable or unwilling to return to their country of origin owing to a well-founded fear of being persecuted for reasons of race, religion, nationality, membership of a particular social group, or political opinion.

However, the term “refugee” is often used more broadly and loosely than its legal definition. For example, colloquial and media usage, general public discourse and political remarks often include individuals seeking refuge and a better life but do not meet the Convention’s criteria for a refugee.

A core refugee principle is “non-refoulement”. That principle states that a refugee should not be returned to a place where their life or freedom would be threatened on grounds of race, religion, nationality, and membership of a particular social group or political opinion.

Most of the United Nations Member States, some 149 countries, have signed or ratified either the Convention, its Protocol or both. The remaining 44 countries, many of which are the top refugee-hosting countries, are not parties to them.

However, the actions of nations regarding refugees are not directly correlated with whether they are a party to the Convention or Protocol. In fact, many signatories to the Convention and Protocol do not honor their protection responsibilities regarding refugees, often believing it’s somebody else’s problem. Increasingly, refugee protections are politicized and seen at odds with national interests and priorities.

Closely related to the refugee documents is Article 14 of the Universal Declaration of Human Rights on the right to seek asylum. That provision states that “Everyone has the right to seek and to enjoy in other countries asylum from persecution.” However, to be granted asylum, a person typically needs to meet the standards of the legal definition of a refugee.

Poverty, the lack of employment, housing, education and health care, poor governance, climate change, and crime are generally not considered legitimate grounds for granting asylum. Therefore, in most instances, claims for asylum are denied because they do not to meet the definition of a refugee.

Concerns about the record numbers of refugees, asylum seekers, and people displaced across borders led to the Global Compact on Refugees, which was launched in 2018. The Compact was intended to improve and better coordinate responses of the international community and host countries. However, the Compact, which was voluntary and nonbinding, offered promises and suggestions without an implementation plan and clear measures of progress.

The record levels of displacement are straining the international refugee system. Humanitarian agencies and refugee host countries, which are predominantly in developing countries such as Turkey, Colombia and Uganda, and more recently Poland, are struggling to provide the basic daily needs to the growing numbers of men, women and children.

Nearly all of the projected 1.8 billion additional people by mid-century will occur in less developed countries. For example, whereas Africa is projected to add more than 1 billion people to its population by midcentury, Europe’s population is expected to decline by nearly 40 million over the next three decades (Figure 2). 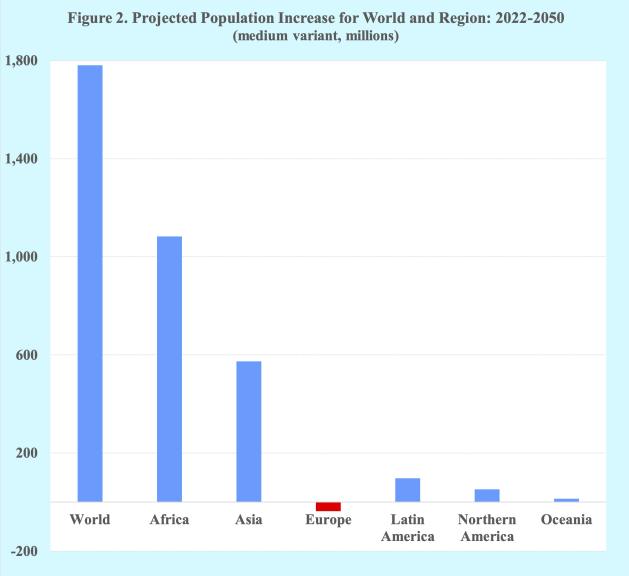 Economic hardship, poverty, social unrest, and conflicts are also increasing the likelihood of future flows of refugees, asylum seekers, and displaced persons. Many people who have little chance of emigrating legally can be expected to resort to unauthorized migration.

To gain entry into their destination country, many unauthorized migrants claim asylum even though most claims subsequently turn out not to meet the legal standards for being granted asylum. Based on the experiences of the past, growing numbers of unauthorized migrants believe that claiming asylum permits them to enter and remain in the country even if their claim is eventually denied, which typically takes lengthy periods to be adjudicated.

In addition, climate-related migration is expected to become a more critical issue in the coming years. Increasing numbers of people, particularly in developing regions, will be forced to adapt to global warming and changing environmental conditions, with many becoming “climate refugees”. A recent landmark ruling by the United Nations Human Rights Committee found it unlawful for governments to return migrants to countries where their lives might be threatened by a climate crisis.