UNITED NATIONS, May 26 2022 (IPS) - Ambassador Maria de Jesus dos Reis Ferreira was appointed in February 2018 as the Permanent Representative of Angola to the UN, the first woman to hold the position.

Among other issues, she has focused on peace and security in Africa and has echoed her country’s strong support for universal vaccination of the global population.

In this interview with Africa Renewal’s Kingsley Ighobor, Ambassador Ferreira discusses women’s empowerment, free trade and what the continent can expect from the UN conference on climate (COP 27) that will be held in Egypt later this year.

Q: What has been your journey to this role as the Permanent Representative of Angola to the UN?

My journey has been a long one, I can take hours talking about it. I started in the army and years later I shifted to diplomacy, which has been quite an interesting and challenging journey.

I have worked as a diplomat since 1980. Before my current role, I worked as an Ambassador in Austria, Slovenia, Croatia and Slovakia with residence in Vienna, where I was the Permanent Representative to the United Nations.

I am the first woman to serve in this post since Angola became a UN Member State 46 years ago.

Q: Congratulations! What are your top three achievements so far?

Talking about achievements, with regards to peace and security, it is important to note that as part of Angola´s leadership of the International Conference on the Great Lakes Region (ICGLR) for the second time, our President João Lourenço, in his capacity as Chair, briefed the UN Security Council in June 2021 at a meeting dedicated to the situation in the Central Africa Republic. He called for an end to the arms embargo imposed on the country. 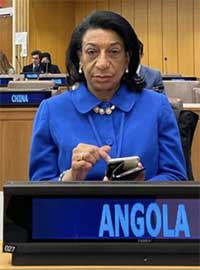 In addition, Angola continues to contribute and support a peaceful resolution of the conflict in Eastern Democratic Republic of Congo.

Also in 2021, Angola presented for the first time its National Voluntary Review at the High-Level Political Forum on the implementation of the 2030 Development Agenda for Sustainable Development.

Another great achievement was that the UN General Assembly, through a resolution in February 2021, granted Angola three additional years [until 2024] to prepare for a smooth transition from the Least Developed Country category to a Middle-Income Country. That was after intense negotiations.

I must mention that Angola is, for the second time, a member of the Advisory Committee on Administrative and Budgetary Questions (ACABQ) for the triennium 2022-2024. The Committee is tasked primarily with examining the programme budget of the United Nations.

Our main priority for this year is to continue to focus on peace and security with particular emphasis on Africa, specifically our sub-region.

We will also continue to pay attention to programmes that foster humanitarian assistance to vulnerable groups, including women and children, environmental protection and sustainable development.

Q: “The role of women in diplomacy is key to reforming the male-dominated nature of international relations,” Ambassador Ferreira

There are only a few African women Permanent Representatives to the UN in New York. What needs to be done to increase that number?

The role of women in diplomacy is key to reforming the male-dominated nature of international relations. Women’s participation in peace and security mechanisms is necessary to deviate from the patriarchal norm of men being decision-makers while women remain in the background.

However, each country has its own national strategy. It is not just a matter of increasing the number of women PRs in New York or in any other position, it is also that women merit it.

In Angola, slowly but surely, positive steps have been taken toward the inclusion of more women in all sectors, including diplomacy. Since President João Lourenço assumed office in 2017, there has been a steady increase in the number of women Heads of Missions. Currently, 14 women lead Diplomatic Missions and three are Permanent Representatives. I am in New York and one each in the UN office in Geneva and at UNESCO in Paris. There is still a gap in terms of gender balance because we have 40 men in the Missions, but we are moving in the right direction.

Q: Why is women’s empowerment important in Africa?

Empowering women in Africa will promote their sense of self-worth, ability to determine their own choices and their right to influence social change in society. Gender equality is achieved when men and women enjoy the same socio-economic rights and opportunities and have equal access to education, health care, decent work, and representation in political and economic decision-making processes.

Women account for about 50 per cent of Africa’s population, but they remain underrepresented in decision-making.

Latest statistics show that women occupy about 24 per cent of parliamentary seats in Africa, significantly close to the global average of 25 per cent. Unfortunately, the sub-regions of Southern Africa with 31 per cent and East Africa with 32.4 per cent largely account for women’s representation in parliament in Africa. The other three sub-regions are way behind.

Of course, the 1995 Beijing Platform for Action has a target of at least 30 per cent while the African Union Agenda 2063 sets a goal of 50 per cent women’s representation.

Angola has been at the forefront of the call for universal COVID-19 vaccination. What more needs to be done to achieve success in this area?

Angola, like many developing countries, has been calling for universal vaccination against COVID-19 so that no one is left behind.

In his speech at the at the UN General Assembly in September 2021, President Lourenço called for the waiving of Intellectual Property rights to make it possible for many countries to manufacture vaccines so that they become available to everyone.

Last February, at the High-Level Meeting on Universal Access to COVID-19 Vaccines, our President again urged the richest nations to donate $5 billion through COVAX for urgent purchase of about 600 million vaccines, and to supportthe implementation of national vaccination campaigns.

The pandemic has a global dimension and therefore requires a global response. Its impact has accentuated the interdependence among nations. For this reason, we continue to advocate for the waiver of IP rights to enhance production, distribution and equitable access.

I am happy that Egypt, Kenya, Nigeria, Senegal, South Africa and Tunisia have been selected to receive the technology required to produce mRNA vaccines on the continent, as part of WHO’s effort to replicate what are believed to be the most effective licensed shots against COVID-19.

The world must come together in this fight against COVID-19. Access to vaccines, tests and treatments for everyone who needs them is the only way out.

Q: We’re now in the second year of the African Continental Free Trade Area (AfCFTA). What are your views regarding how African women can benefit from free trade?

There is no doubt that women are key stakeholders in the development of the African economy. First and foremost, women constitute 70 per cent of informal traders, which is why the AfCFTA recognizes the importance of gender in intra-African trade.

But we must take further steps. For example, we must promote policies that close the gender gap. In considering the potential impact of AfCFTA on Africans, let’s consider the question of whether such an impact will help address gender inequality.

The good news is that, according to the World Bank, AfCFTA could potentially lift 30 million Africans out of extreme poverty and increase the incomes of 68 million others who live on less than $5.50 a day. And we have a combined market of 1.3 billion people from which women traders can benefit immensely.

In addition, the AfCFTA can boost women’s roles in jobs across different sectors, for example the agricultural sector.Expanded export markets present huge opportunities for women.

Remember also that increased industrialization and diversification can benefit women in manufacturing industries because it will make higher-skilled and better-paying jobs more available and accessible to them. Significantly, women entrepreneurs, including those in SMEs, will reap rewards from regional value chains.

Q: “A better deal for Africa will mean climate justice for a continent that accounts for only three per cent of cumulative global CO2 emissions but bears the brunt of its effects,” Ambassador Ferreira

Egypt will host COP27 later this year. What does Angola at large want to see come out of it?

First, I would like to congratulate Egypt for being the host of COP27.

Angola considers climate change to be one of the greatest challenges facing humanity due to its direct and indirect effects on the economic and social life of nations. Climate change poses systemic risks to our economies, infrastructure investments, water and food systems, public health, agriculture, and livelihoods, which collectively threaten to undo Africa’s development gains.

Africa is the most vulnerable continent to climate change impacts under all climate scenarios above 1.5 degrees Celsius.

Currently, Angola’s national energy matrix incorporates 62 per cent of non-polluting sources of energy, and we are aiming to reach 70 per cent in 2025. We have clearly defined our concrete contribution to a reduction of carbon in electricity production until 2025. We are also taking complementary actions in the sustainable management of forests, transport and agriculture.

A better deal for Africa will mean climate justice for a continent that accounts for only three per cent of cumulative global CO2 emissions but bears the brunt of its effects. Yet, less developed countries are under increasing pressure to adopt low-carbon development and transition their economies to net-zero by 2050.

In my view, COP27 presents a unique opportunity for Africa to lead the climate conversation and negotiate better climate deals for the continent.