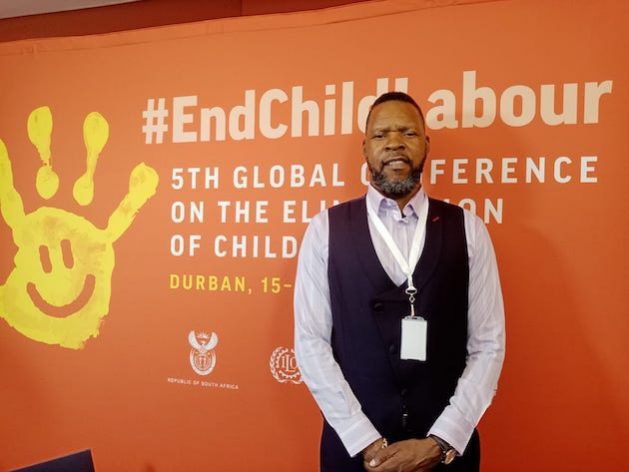 Durban, May 18 2022 (IPS) - With a strong commitment from governments, businesses, labour and consumers, the scourge of child labour can be eliminated, says Dr Joni Musabayana, Director of the International Labour Organisation (ILO) in Pretoria, South Africa.

Speaking to IPS in an exclusive interview at the 5th Global Conference on the Elimination of Child Labour in Durban, Musabayana was upbeat despite an increase in child labour worldwide. International efforts to end the scourge are under pressure to reach the United Nations goal of ending child labour by 2025.

Musabayana also spoke of the Durban Call To Action – expected to be ratified at the end of the conference.

“It  is not so much about legally binding but to give impetus to accelerate the efforts to address a problem using good practice.”

Musabayana says the sizeable high-level contingent of African delegates is a good sign for the continent, which carries the biggest burden of child labour.

“It is agreed that of the 160 million children in labour, 92 million are on the African continent. The turnout of 60% to 70 % African delegates, just by coming, shows their commitment to redouble their efforts to address this scourge.”

The key drivers of child labour in Africa are agriculture, bonded labour on the farms, mining, fishing, sexual exploitation of young children and informal and domestic work.

“You need multiple stakeholders and an integrated approach. It is not only about the government, but it has to show leadership because the fundamental pillars of solving child labour are largely access to free education, food schemes for children, and child support grants.

“These are policy instruments that South Africa is showing leadership in. Other African countries are following, and they are pointing us in the direction of what needs to be done.”

Political will and partnerships are vital to ending child labour.

Musabayana says: “What we need is extra political will, which we hope this conference will generate, to ensure that these programmes are well resourced, implemented, well monitored.

“Partnerships must be established with civil society, the employers employing child labour, and the unions working with these children.”

He encourages the media to expose instances of child labour, “if I could say to ‘name and shame’ those who continue to perpetuate this abhorrent practice.”

On the issue of global supply chains, he says: “We are happy that the CEOs of Nestle and Cocoa Cola have been with us and other big businesses. (It’s) important to see that they do not find it acceptable to source products and services made and facilitated through child labour.

Talking is not enough, though.

“It is not enough to make this point but crucial to cut off access to goods and services associated in their value chain with child labour.”

Musabayana adds: “Most critical is the end consumer, whether in China or the US or indeed the African continent or in Europe. I think everybody abhors products and services got through child labour, and we need to highlight which products are on the market and why end consumers should disassociate themselves with them.”

It’s emerged that many child labourers are employed by their own families. Musabayana blames this on poverty, saying no parent “willingly says I will send my child to work in a farm using hazardous chemicals.”

Therefore, the ILO seeks social protection for vulnerable families “to ensure that no one falls below a certain level of human survival.”

“These are policy instruments to ensure that families are not in such want and hunger, and in such need that they feel it necessary to use children to augment the family income.”

But where will the money come from?

“Clearly, the affordability of social security packages is a necessary debate, but we will always start by saying if you think it’s expensive to have a social protection plan, try the alternative.

“What kind of a society would we have?  We already have a fairly unequal society, and then what happens if we don’t take clear measures to ensure that those at the bottom of the pyramid lead a decent life,” Musabayana asks.

Earlier this week Nobel Laureate Kailash Satyarthi told the conference the estimated cost of a social protection package for all children was 53 billion US dollars per annum.

As for a decent living wage, Musabayana says: “The ILO has supported the concept of a national minimum wage and the principle of collective bargaining so that working people must negotiate with their employers an agreement on what is a fair remuneration.”

The ILO also supports a national living wage. But Musabayana says it must be done responsibly: “We must have a gradual approach so that it is affordable and businesses that are supposed to carry this cost are still able to make a profit because we must not kill the goose that lays the golden egg.”

“I don’t think we should give up now and throw out hands in the air. We must ensure that come 2025, we can say – we did accelerate, we did remove many children, but more importantly, we should make sure no more children are entering the child labour.”