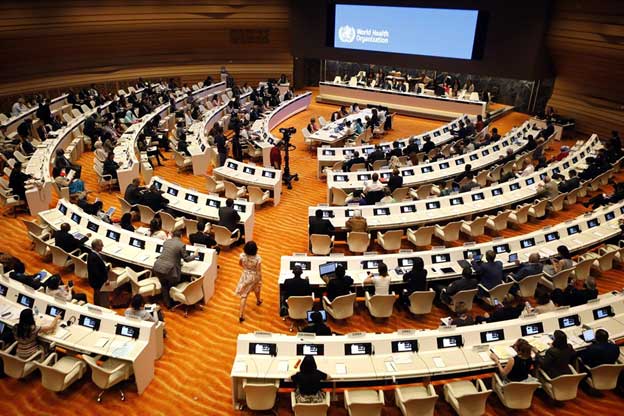 The World Health Assembly (22-28 May) is expected to discuss the pandemic treaty.Credit: World Health Organization (WHO)

ROME, May 12 2022 (IPS) - In what has been defined a historic consensus decision aimed at protecting the world from future infectious diseases crises, on 1st December 2021, the special session of the World Health Assembly agreed to kickstart a global process to draft and negotiate a convention, agreement or other international instrument to strengthen pandemic prevention, preparedness and response.

According to the World Health Organization (WHO) Director-General, the decision marked “a once-in-a-generation opportunity to strengthen the global health architecture to protect and promote the well-being of all people”.

The process officially started with the constitution of the Intergovernmental Negotiating Body (INB), whose task is weaving the texture of the negotiation, based on a treaty working draft, by 1st August 2022. The INB is mandated to submit the outcome of its work for consideration by the 77th World Health Assembly in 2024.

The WHO does not have a consolidated experience in exercising its binding normative power, having used it only twice in seventy-four years. Well before the pandemic, the health agenda negotiated at the WHO had propelled experts and civil society organizations to call for hard rules to replace voluntary regimes, insufficient to address escalating challenges and expanding determinants, which now include trade rules, environment, digitalization.

On the other hand, as illustrated in the Geneva Global Health Hub (G2H2) report on the genesis of the pandemic treaty, there are piercing geopolitical issues that require scrupulous mapping of reality and a questioning attitude, now that the international community is projecting itself towards a pandemic future.

Does the world need a new pandemic treaty?

After months of debates in the WHO Working Group on Pandemic Preparedness and Response (WGPR), there remains a lack of deep contextual evidence on the problems that the new instrument could and should help solve.

There is not even an official definition of what a pandemic is in legal terms. COVID-19 has not been the only pandemic raging the world – global cancer figures are staggering and doomed to grow due to the effects of COVID and climate change.

Other existing pandemics (like antimicrobial resistance) are not exclusively triggered by zoonotic events – most of which are caused by wildlife trading, alongside nature loss, industrialized livestock production and habitat destruction. Shouldn’t binding measures to prevent and respond to such crises address the widespread destruction of ecosystems, instead?

Pandemics are neither a destiny nor a natural phenomenon. The WHO Independent Panel on Pandemic Preparedness and Response report explains that they are the undesirable result of multiple governance failures, starting from lack of international cooperation.

This unfortunate conjuncture should be understood, yet to date, there is no comprehensive analysis of the reasons why governments did not comply with the existing WHO binding legal framework designed to face health emergencies: the International Health Regulations (IHR), last reviewed in 2005 (after SARS).

IHR obligations should have guided countries to engage in sharing information and cooperating for contrasting SARS-CoV-2 unknown and aggressive contagion. What went wrong? It may be that IHR are prominently skewed towards prevention and detection of pathogens, and limited on response steps to prevent transmissions.

But couldn’t they be seriously revised and updated, as in the past, to include the new contents deriving from COVID-19’s unprecedented lessons instead of a push for a new treaty?

The WHO Emergency Committee and alarm system must be reformed, along with the strengthening of the legal obligations and compliance of cooperation rules: this is the terrain where most IHR violations have occurred.

One Health approaches surely need integrating in the negotiated review, to build a better prevention and response capacity on the harsh lessons of COVID-19. A clear uncompromising priority assigned to sustainably financing universal public health systems and their workforce, as the reliable safeguard for societies when outbreak emerge, must supplant persisting policies skewed to health privatization and financialization, too uncritically promoted by the WHO. Existing IHR provisions need updating and strengthening to this end.

Ultimately, the critical tension between global health security requirements and the management of existing science must be resolved in the interest of public health rather than private profits – COVID-19 makes it very clear that it’s not an easy game.

Meanwhile, things are being made more complicated. Now that the pandemic treaty negotiations are being led by the INB, in parallel to the IHR review led by the US, new layers of diplomatic intricacies are surfacing in terms of content and process overlaps, ushering dwindling expectations.

The lack of a shared vision is matched by the accelerated pace of the INB negotiation, for which governments are not ready – uneasiness emerged in recent European consultations on the treaty elements that were to be provided by 29th April.

Both the WHO and the INB claim to be looking at the precedents of the WHO’s only other treaty as guidepost, the breakthrough Framework Convention on Tobacco Control (FCTC), while civil society organizations have been instrumental in paving the way to the FCTC and challenging the playbook of the tobacco industry, they now sit at the very margins of the diplomatic process, advocating in the paucity of spaces and restrictions of time allowed in the first round of public hearings.

Thanks to the FCTC’s long negotiations involving broad and consistent civil society participation, the WHO first global health treaty has strict provisions and guidelines on conflicts of interest.

Twenty years later, the fact that macroeconomic forces have been allowed to shape a new political platform for global governance through multistakeholderism, it does not necessarily favor the best scenario for pandemic treaty-making.

The WHO is weakened and under-resourced, while the corporate sectors that have profited from the pandemic in terms of market dominance – pharma companies, big tech, etc. – seemingly support this new negotiation, deemed to institutionalize the super public and private partnerships assembled in 2020 by major philanthropic actors for COVID-19 response.

Governments for their part are still grappling with the pandemic and its turbulent socio-economic effects. Meanwhile, exactly like one century ago, the pandemic tsunami gets tangled with a war of international proportions doomed to transform the world and the international community.

The tang of the Russian invasion of Ukraine is starting to poison Geneva’s health circles. This is not a good foreboding.