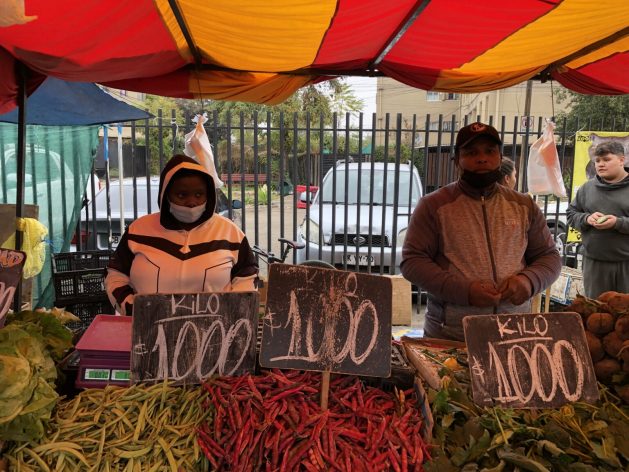 Lacombe (right), from Haiti, and Ricaela, a Dominican who recently arrived in Chile, pose at the stall where they work for a Chilean entrepreneur at a popular outdoor Sunday market in Arrieta, in Peñalolén, in eastern Santiago. CREDIT: Orlando Milesi/IPS

SANTIAGO, May 16 2022 (IPS) - The pressure of the influx of migrants, especially Venezuelans, has reached a critical level in northern Chile, and is felt as far as the capital itself, forcing the government that took office in March to create a special interministerial group this month to propose solutions that respect their human rights.

The first problem is that the number of undocumented migrants is unknown, since in recent years thousands have entered the country unregistered, especially through Colchane, a small town in the Andes highlands in the northeast bordering Bolivia.

Jorgelis, a 23-year-old Venezuelan woman, crossed the border into Chile there last December.

“It was the longest 11 days of my entire life,” she told IPS, her face darkening as she remembered the journey from Caracas to Colchane.

Today she sells fruit at a stand on Santiago’s main avenue, Alameda, on the corner of Santa Lucía street outside the subway station, just five blocks from La Moneda palace, seat of the presidency, where leftist President Gabriel Boric, 36, has been governing since Mar. 11.

Jorgelis’ 33-year-old cousin Engelin arrived two months ago “after a 10-day journey that at one point took us though the middle of the desert.

“I left behind two daughters in Venezuela, 15 and five years old,” she said. “That is a very strong pain in my heart.” And she complained about the cold, pointing out that in tropical Caracas the temperature only drops – and much less than in Chile – in December and January.

Engelin lives in a Haitian camp in the municipality of Maipú, on the west side of Santiago, and sells fruit at a stand outside the Metro República subway stop, also on Alameda avenue.

Dubarly Lorvandal, 23, arrived from Port-au-Prince, the capital of Haiti, when he was 18 years old, after studying in high school. He does not have a visa and works at a vegetable stand in an open-air market in Arrieta, in eastern Santiago.

Relaxed entrance policies that were introduced in 2010 and later eliminated turned Chile into a popular destination for Haitians fleeing a cocktail of natural and economic tragedies.

“I worked at the beginning for a month laying cables, but now I’m a papero (potato seller). Everyone loves me at this market,” he says with a smile.

Lacombe also came from Haiti six years ago and works alongside Ricaela, who arrived six months ago from the Dominican Republic. The two undocumented migrants sell vegetables at a stand in the Arrieta market. Lacombe says he is happy.

Jorgelis, Engelin, Dubarly, Lacombe and Ricaela are all part of the long line of at least half a million people waiting to regularize their legal status in Chile, a long narrow country of 19.4 million inhabitants that stretches between the Andes Mountains and the Pacific Ocean.

According to the latest official figures on migration in Chile, from 2020, there were 1,462,103 foreign nationals in the country, including 448,138 migrants from Venezuela, which since 2013 has experienced a massive exodus of more than six million people, a good part of whom are scattered throughout neighboring Latin American countries.

But these statistics do not include migrants who remain undocumented and whose real number the organizations working with immigrants prefer not to divulge. 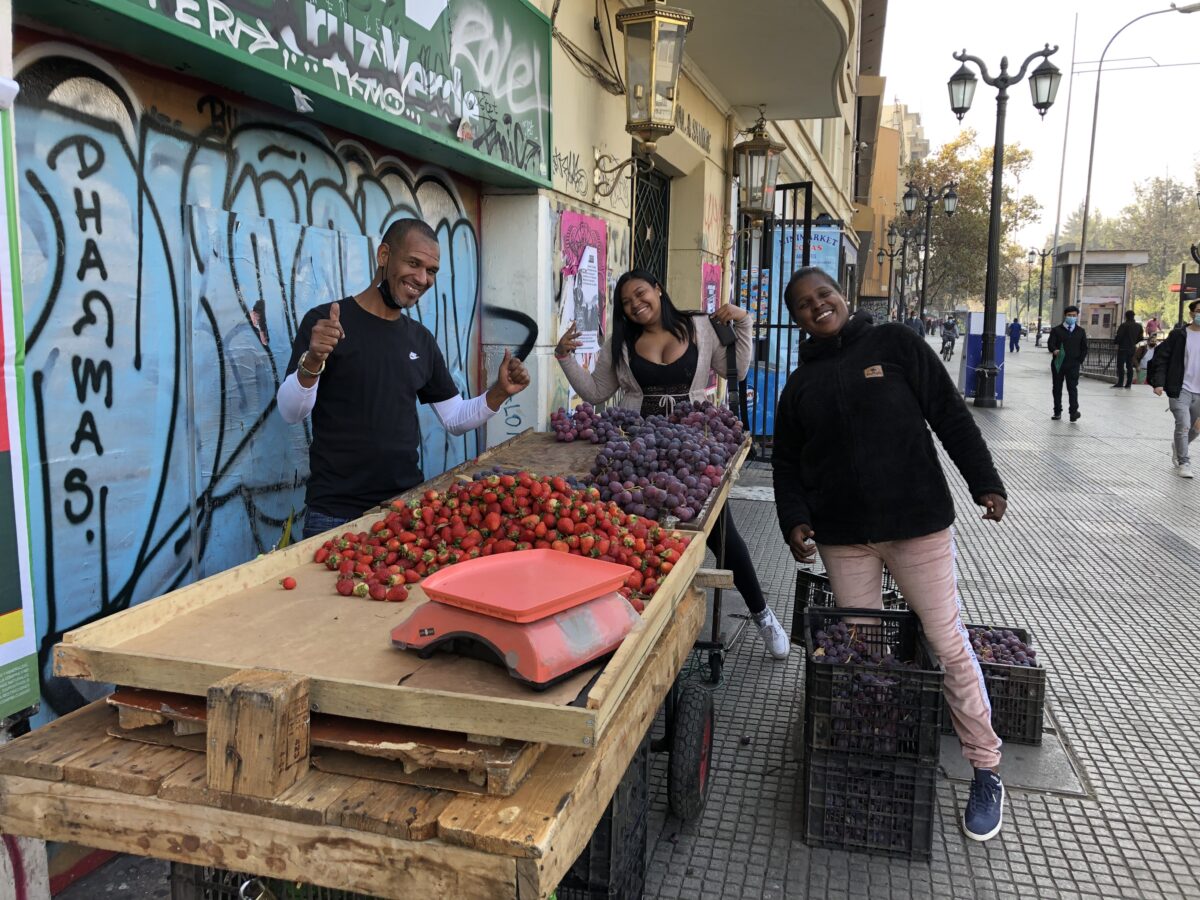 “Over the last three years, 90 percent of people entering have come through unauthorized crossings,” said Macarena Rodríguez, chair of the board of directors of the Catholic Jesuit Migrant Service.

“Since 2020 the border has been closed, and before that the government required a visa (acquired in their countries of origin) for Haitians and Venezuelans. When you restrict regular entry, irregular entry increases,” Rodríguez, the head of one of the country’s main immigrant-serving organizations, told IPS.

“There is a huge number of people who are not counted, who have no papers and cannot work (legally). And their children have irregular migratory status. And they pay five times more in rent (on average) for precarious housing,” she said, listing some of the problems faced by undocumented migrants.

Luis Eduardo Thayer, who took office in March as director of the National Migration Service, is part of the new Interministerial Commission expanded to include civil organizations, created on May 6 by the government to seek solutions to a growing social problem that has given rise to expressions of xenophobia.

President Boric stated that the solution must include other countries of origin or transit of migrants, although there are no details yet as to what this eventual participation would look like.

The commission seeks to “address with a sense of urgency and responsibility the challenges and opportunities posed by migration in different territories,” said Minister of the Interior and Public Security Izkia Siches.

The new authorities do not want a repeat of the measures taken by the government of Boric’s right-wing predecessor Sebastián Piñera, which loaded dozens of migrants dressed head-to-toe in white sanitary protective gear onto airplanes and deported them. The widely published photos were aimed at dissuading migrants from coming to Chile and at reassuring worried Chileans.

Thayer said the National Migration Service “is a ship that is now in the process of stabilization and we are taking the necessary internal measures so that we can fulfill our mandate.”

The head of migration proposed moving towards “a rational migration policy.” 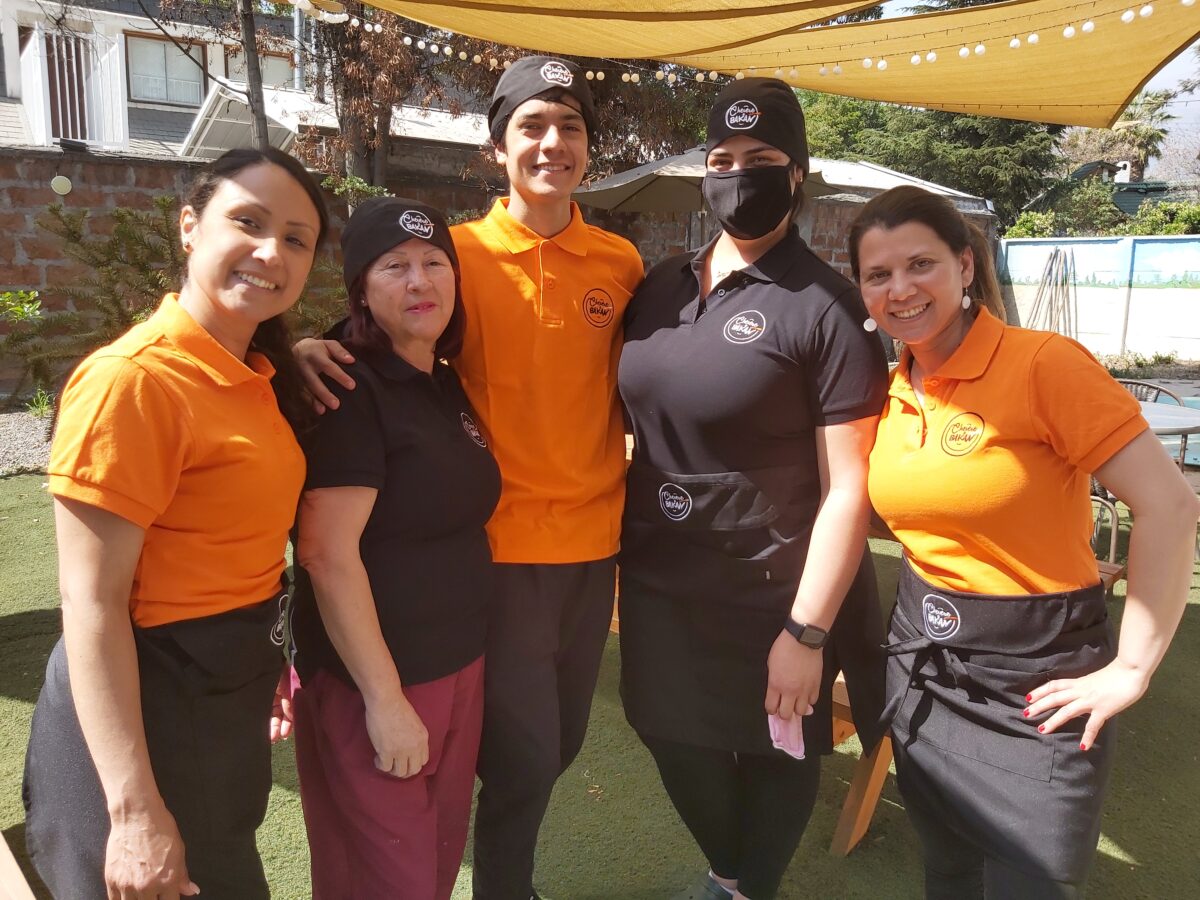 Workers at the Chevery Bakan, a Venezuelan restaurant in the La Reina district in Santiago, Chile that employs nine Venezuelan immigrants, six of whom have visas. “We all do everything, working in the kitchen or serving customers. And I work hard, I haven’t had a vacation for three years,” says Yulkidiz Pernia, the Venezuelan owner. CREDIT: Orlando Milesi/IPS

According to Rodríguez, in Chile “today we have a pressure cooker with many people having to take informal jobs or even to rent an identity to sign up for an application and be able to work.

“This situation must be urgently addressed,” she said. “That means recognizing them, identifying them, documenting them, issuing visas, prioritizing the situation of children and pregnant women and thus try to put things in order.”

She also cited “the impact on the communities where these people arrive, where the impression is socially complex. They are described as criminals, generating among the local population the sensation that migration is bad.”

Yulkidiz Pernia, 38, a publicist from Caracas, comes from a different generation of migrants, as she arrived six years ago with her son and got a visa without any problems, “although it took seven months.”

Today she has a restaurant that serves Venezuelan food, Chevery Bakan, which employs nine other Venezuelans, six of whom have legal documents.

“I have not done badly. I miss the rest of my family, uncles and aunts. Several of them have died and we couldn’t be there,” Yulkidiz said. “In Chile I have found a warm welcome. The cases of xenophobia are isolated.”

But the study “Immigrants and Work in Chile”, by the National Center for Migration Studies at the University of Talca, found that 51.1 percent of the migrants surveyed said that being a foreigner has had a negative influence on their labor integration in Chile and 51.4 percent said that at work many people have stereotypes about them and treat them accordingly. 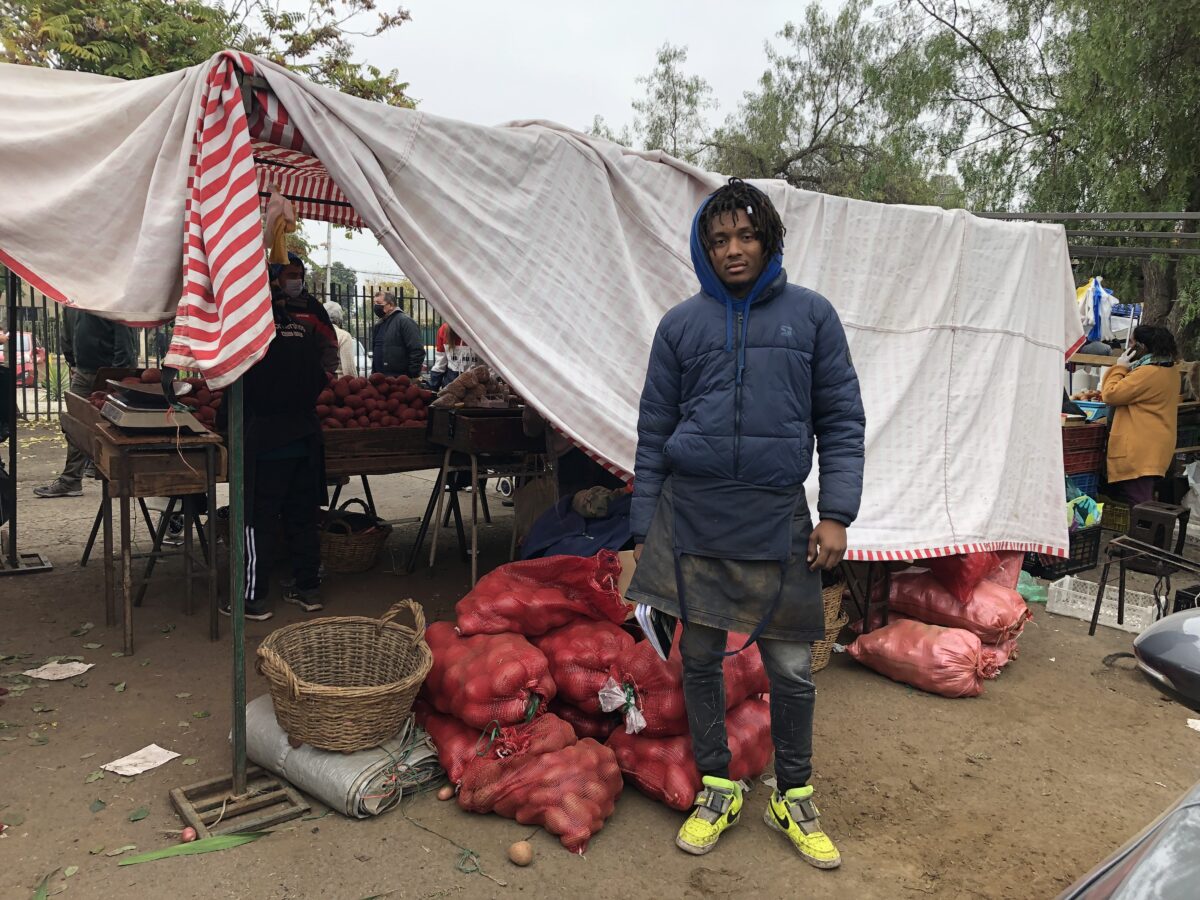 Dubarly, a Haitian immigrant, lives alone, but he gets together with cousins and other Haitian friends to eat because “it’s hard to get home and have to do everything yourself.” At the food market in Santiago, Chile where he works, he is happy because he feels loved and enjoys working as a vendor. CREDIT: Orlando Milesi/IPS

Colchane, a town with only 1,500 permanent residents, is the gateway for irregular migration from Bolivia, a preferred transit route after arrival through the airports was closed. The town’s mayor, Javier García Choque, fears that the culture of the Aymara indigenous people, the main native group in the area, will disappear due to the exodus of local inhabitants after the massive influx of foreigners.

“Migrants provide data on their identity, but there is no mechanism for verifying whether they are who they say they are,” the mayor said on a visit to Santiago.

According to García Choque “many migrants come with family members, with terminally ill people. They come in search of opportunities. But some people are violent and destroy public spaces or occupy private homes, which has led many to build fences around their yards, which are not typical of Aymara culture.”

“The Aymara people are disappearing, they are vulnerable and we cling to our cultural identity to preserve it. This migratory phenomenon has been disproportionate in quantity and violence,” he said, demanding greater security in his municipality.

Patricia Rojas, of the Venezuelan Association in Chile, admits that migration management under the restrictive law imposed by Piñera “has had a negative impact on peaceful coexistence, especially in the cities and northern regions.

“We all have to make an effort to reverse this, so that the public perception of migration is not the negative one we are currently experiencing, because this will not benefit Chilean society in any way,” she said.

Jaime Tocornal, vicar of the Catholic Social Pastoral in Santiago, told IPS that in Colchane “these poor people arrive hungry and cold, completely disoriented. At an altitude of 3,600 meters they arrive with altitude sickness and hope to cross the border and get to Santiago, only to realize that they still have 1,500 kilometers to go.”

“The situation is dramatic. The landscape is wonderful, like in the rest of the highlands, full of volcanoes and running water up in the mountains. But the water, which might be very beautiful, creates mud that sticks to the shoes of people crossing the streams and they slip and fall when they try to drink the water,” he said.

Twenty-seven people died this year, seven of them between January and March 2022, in their attempt to enter Chile, according to figures from the Chilean office of the United Nations Refugee Agency (UNHCR) and the Archbishopric of Santiago.

The documentary “Hope Without Borders” says the dead could number in the hundreds in recent years, and “many bodies have been abandoned in different desert or wooded areas crossed by migrants coming from Venezuela to Chile,” often at least partially on foot.

García Choque said that despite the state of emergency decreed by Piñera to bring in the military to control the northern border zone, “the flow of migrants did not cease.”

“It changed the way they came in, but it forced the migrants into situations where it was more complex to rescue them: the coyotes (human traffickers) moved them to remote areas, which put their lives and health at risk,” he said.