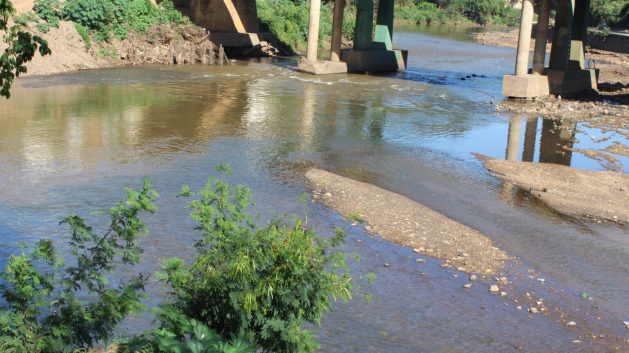 The confluence of the waters with the distinct colors of the pollution of each one: darker waters reflect the urban sewage of the Arrudas River, while brown reflects erosion coming from the upper Velhas River, a natural effect or product of mining visible in the city of Belo Horizonte, in southern Brazil. CREDIT: Mario Osava/IPS

RIO DE JANEIRO, Jun 7 2022 (IPS) - Acaba Mundo has fallen into oblivion, despite its apocalyptic name – which roughly translates as World’s End – and historical importance as an urban waterway. It is a typical victim of Brazil’s metropolises, which were turned into cemeteries of streams, with their flooded neighborhoods and filthy rivers.

The Acaba Mundo stream disappeared under the asphalt and concrete of Belo Horizonte, capital of the state of Minas Gerais in southeast Brazil. It was the main source of water for the first inhabitants of the city founded in 1897 and the first watercourse in the city to be culverted and hidden underground.

Interventions on the riverbed began a century ago, with modifications to adjust it to the geometric layout of the streets and canalizations, and ended with it being completely covered over, except for its headwaters, in the 1970s, geographer Alessandro Borsagli, a professor and researcher who specializes in water issues, told IPS.

It became invisible, like practically all the streams that flow into the Arrudas River, the axis of the main watershed of the planned city of Belo Horizonte, whose limits were exceeded decades ago by urban sprawl and which now has 2.5 million inhabitants. 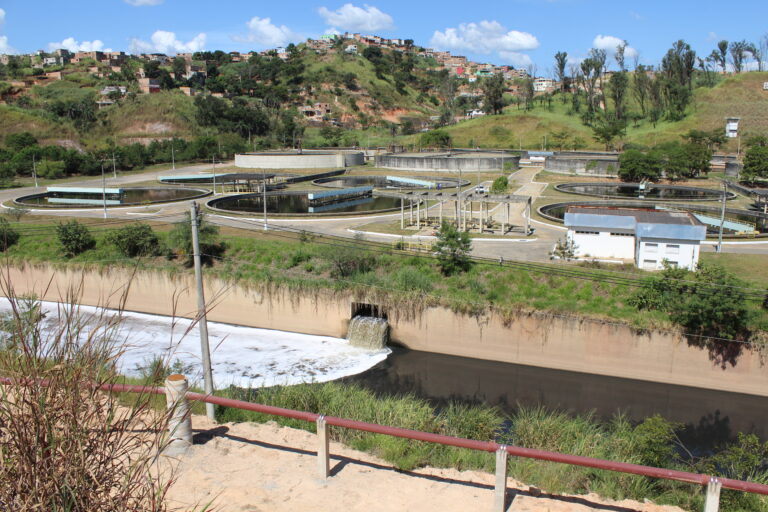 The water is still dirty when it is returned to the Onça River after passing through the Wastewater Treatment Plant in the city of Belo Horizonte, in southern Brazil. Much remains to be decontaminated, as well as the Velhas River that it flows into. CREDIT: Mario Osava/IPS

The existence of the Acaba Mundo stream has also been erased from people’s memories. But its waters still run in clogged culverts under streets and avenues, including the city’s main avenue, Afonso Pena.

The city government does not even mention it in the presentation of the America Rene Giannetti Municipal Park, a large popular space for tourism and nature conservation in the center of the city, which was originally crossed by the stream before it was diverted by canals to another sub-basin.

Only elderly residents such as Carmela Pezzuti, who lived in Belo Horizonte for a few months in 1939, when she was six years old, still remember – as she told IPS – that the park then took its name from Acaba Mundo, when the stream still existed aboveground.

Today, the so-called Dry Bridge is still there, under which the now hidden and forgotten stream used to flow.

“This reflects the history of Belo Horizonte, of increasing interventions in the watercourses and ‘hydrophobia’ in response to the stench from the streams, which were used as sewage outfalls and turned into sources of diseases,” in addition to the increasingly frequent floods, said Borsagli. 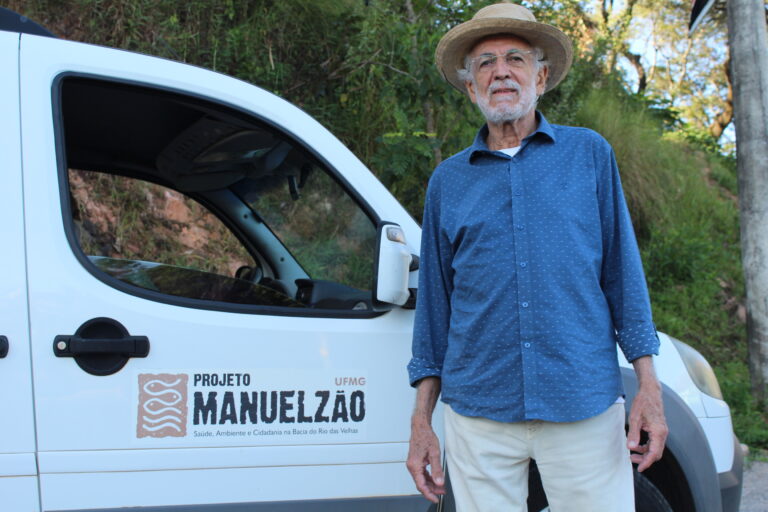 Apolo Heringer, a physician and environmentalist who has raised awareness and mobilized local residents in defense of the Velhas River and its watershed with the Manuelzão Project, a university project named after an important literary figure in the culture of the state of Minas Gerais, in southeastern Brazil. CREDIT: Mario Osava/IPS

Covering up the streams and expanding the underground channels became a demand of society in general, in addition to responding to the interests of real estate businesses that have treated the watercourses as obstacles to the construction of new housing, he said.

The transportation sector, from the automotive industry to bus companies, also pushed for the conversion of riverbeds and their banks into avenues, as has been done since automobiles took over the cities.

“The urban mobility model adopted is incompatible with watercourses,” urban architect Elisa Marques, a researcher and activist on water issues, told IPS. “Avenues are built on the valley bottoms, the riverbeds are blocked and the soil becomes more impermeable. Improving public transport would reduce the space for cars and return it to the waters.” 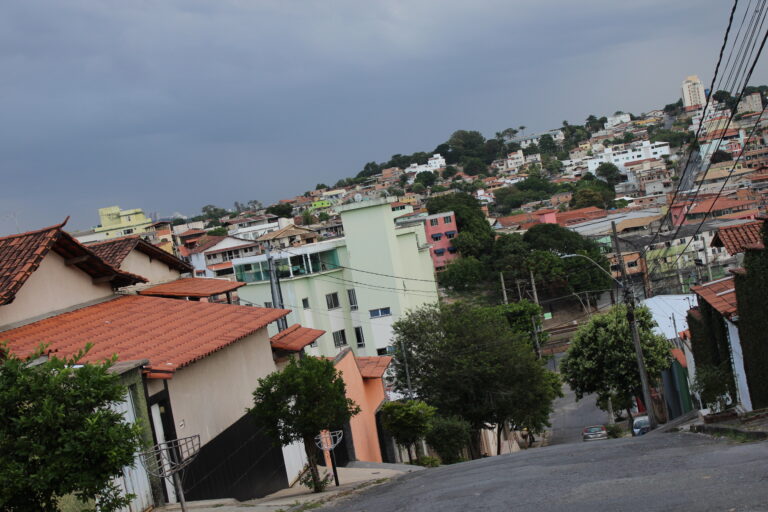 A residential neighborhood in northern Belo Horizonte, with its distinctive dips and rises that accelerate torrents caused by rainfall, which flood the valleys. The steeper slopes of the Curral mountain range, in the south of this southern Brazilian city, aggravate water disasters. CREDIT: Mario Osava/IPS

The increasing impermeabilization of the soil, due to urban expansion and suppression of vegetation, makes the channels, no matter how much they are enlarged, unable to absorb the increased flow of torrents in the rainiest periods, usually in December and January, said Borsagli.

The topography of Belo Horizonte favors the existence of hundreds of fast-flowing streams and minor watercourses, due to the steep slopes.

“It is not known for sure why the Acaba Mundo stream is so named, whether it is because its source is far from the center of the city like the end of the world or because of the destructive force of its torrent,” explained the geographer, author of the book “Invisible Rivers of the Mining Metropolis”.

Flooding worsened as the city grew, especially from the 1940s onwards, and interventions that replaced the streambeds with channels aggravated the problem, according to Borsagli. He explained that channelizing a stream almost always increases the flow that floods the watershed below.

Currently, the most severe flooding continues to be seen along some parts of the Arrudas River, but it has become more frequent in Belo Horizonte’s other basin, that of the Onça River (the Portuguese name for jaguar), in the northern part of the city, whose population has grown more recently and is poorer.

In general, Brazilian cities lack efficient drainage systems. The governmental National Sanitation Information System found that in 2020 only 45.3 percent of the 4107 municipalities that participated in its assessment – out of a national total of 5570 – have exclusive rainwater drainage systems. In the rest the rainwater is mixed with wastewater.

This shortfall exacerbates the recurrent water tragedies. São Paulo also suffers annual flooding in several neighborhoods. And on the outskirts of Recife, in the Northeast, torrential rains in the last days of May left at least 127 dead and 9,000 people affected. 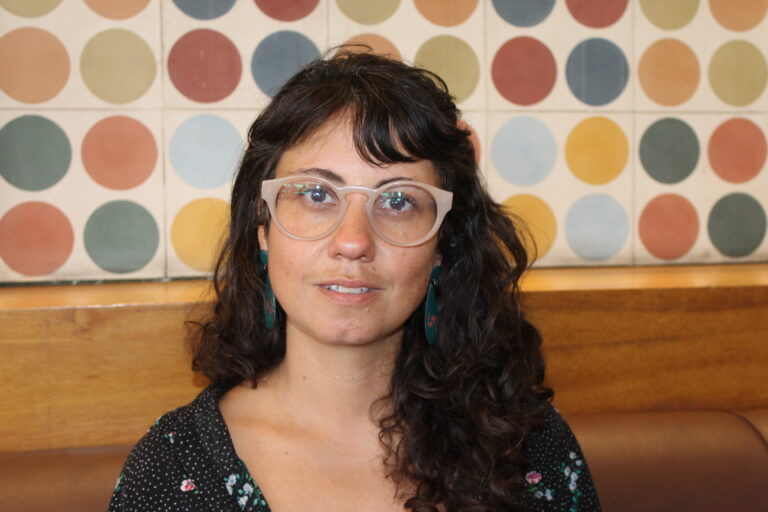 The primacy of automobiles over public transport put pressure on the banks of urban rivers because of streets that invade the space of the water and make the soil impermeable with asphalt, aggravating the floods that recur every year in Brazil’s major cities, according to urban architect Elisa Marques. CREDIT: Mario Osava/IPS

In addition to the failure of stormwater drainage, there is also the pollution of water resources. For decades Belo Horizonte used the streams as sewage channels, with little treatment of the drainage, spreading filth and disease.

Heringer, who was a political exile during the 1964-1985 military dictatorship, founded the Manuelzão Project at the university in 1997, with the aim of cleaning up and revitalizing the Velhas River, the source of half the water consumed in the areas on the outskirts of Belo Horizonte and the recipient of the rivers that cross the capital, the Arrudas and the Onça.

The ETEs respond in part to the strategy advocated by the environmentalist and his project of concentrating efforts where they are most productive.

“Along 30 to 40 kilometers of the Velhas River and the final stretches of the Arrudas and Onça rivers, 80 percent of the pollution produced by 80 percent of the population of the outlying neighborhoods is concentrated, both from sewage and garbage. It is the epicenter of pollution,” Heringer told IPS.

Focusing efforts in this area, which makes up only 20 percent of the city, would practically result in the decontamination of the Velhas River basin, which extends for 800 kilometers and flows into the São Francisco, one of the largest national rivers that crosses a large part of the semiarid Northeast region.

But the goal of being able to swim, fish and boat in the Velhas River requires 100 percent wastewater treatment, and the collection and proper management of all garbage so that the liquid runoff does not go into the rivers. This means it is still a distant dream, the expert acknowledged.

The treatment of sewage by the Minas Gerais Sanitation Company (Copasa) is still incomplete; the water that is returned to the rivers still contains impurities, the environmentalist lamented.

ETE Arrudas removes the main pollutants and complies with national legislation, as shown by laboratory tests. “It is possible to visually verify the difference in quality of the treated sewage in relation to the raw sewage,” Copasa replied to questions from IPS on the matter.

However, in the Onça River ETE, the water returned to the river does not appear to be clean.