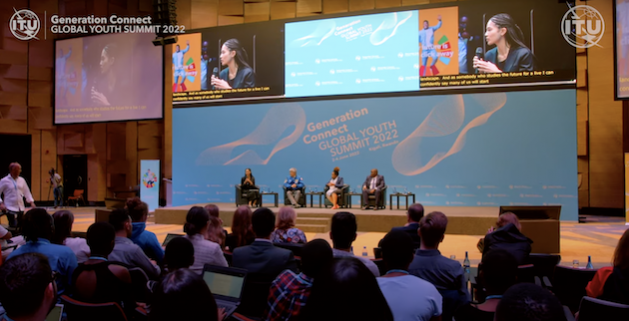 Delegates at the International Telecommunication Union (ITU) summit debate the role of youth in narrowing the digital divide. Credit: ITU

The International Telecommunication Union (ITU), the UN agency on information and communication technologies, organized the summit. It served as a build-up to the ITU’s World Telecommunication Development Conference (WTDC), held two days after the conference, from June 6–16.

Participants at the summit emphasized the need for young people to be considered equal partners in decision-making, especially around problems concerning their future.

“We know that young people are going to be the most affected by problems like the climate crisis. That means that we must have a stake in what is decided and what is negotiated in these spaces,” climate activist Xiye Bastida said.

The discussion was also centered around bridging the digital divide. Like the later WTDC conference, the summit’s theme was “connecting the unconnected to achieve sustainable development.”

During the opening ceremony, Prime Minister of Rwanda Édouard Ngirente remarked upon the benefits of digital technologies being omnipresent in daily life. But the Prime Minister also noted that many were missing out on the advantages of technological innovation.

Globally more than 2.2 billion children and young people lack an internet connection at home. Of those, 350 million young people have never accessed the internet.

“The digital economy is growing rapidly, with almost every aspect of our lives moving online and massive economic opportunities being created. Opportunities ahead are indeed promising, but in order to fully tap into these opportunities, we must ensure that nobody is left behind,” he said.

Ngirente mentioned that the lack of uniform access to technology posed challenges for economic development and youth employment rates.

“The extent to which our economies can grow will depend on the ability to ensure equitable access to technology and upskilling and reskilling our populations, especially the young,” he said.

For example, only 15 percent of women and girls in the least developed countries use the internet, noted Heidi Schroderus-Fox, the UN Acting High Representative for the Least Developed Countries, Landlocked Developing Countries, and Small Island Developing States.

“There’s a huge gap,” Schroderus-Fox said. “We need to make sure that the opportunities of the internet and the digital world are provided equally for everyone, women, girls, men, boys, everyone.”

Critical policy matters related to internet connectivity and technologies, such as cyber-safety, the future of work, and entrepreneurship, were also explored in summit sessions. The need for youth engagement to weigh in on these policy matters remained an essential thread throughout the event.

Twenty-six-year-old Emma Theofelus, the Namibian Deputy Minister of Information and Communication Technology, talked about how young people are best positioned to discuss regulations around online work and content creation due to their experience navigating online spaces.

“Policy should take center stage. But, beyond that, it is a policy that should be co-created by young people. We understand best the complexities and challenges of online platforms and the harms that can come with it,” she said.

The emphasis on youth engagement was central to the summit’s outcome document—the Generation Connect’s Call to Action. “Our Digital Future,” lists recommendations to foster better youth participation around decisions in governments, the UN, and the ITU for “a more inclusive, sustainable digital future.”

Situating the Call to Action, the Rwandan Minister of Youth Rosemary Mbabazi emphasized the document as a pivotal step for more digital inclusivity.

“The Call for Action embodies the call to the young minds, the global partners, the private sector, and the commitment to provide internet connectivity and make it accessible, available, and affordable through creating and enabling an environment as well as providing the prerequisite infrastructure for the young people to invent and innovate,” she said.

Although the Call to Action had been in the works since 2020 and had already undergone an extensive online consultation process, it was finalized during the summit. There, attendees reviewed the document and gave suggestions for improvement.

One suggestion was to refer to sexual minorities alongside gender minorities. Another was to swap the phrase “digital rights” for “human rights” to leverage the issue’s urgency for policymakers and use established language for international documents.

The Generation Connect Call to Action was to be presented to leaders at the WTDC.