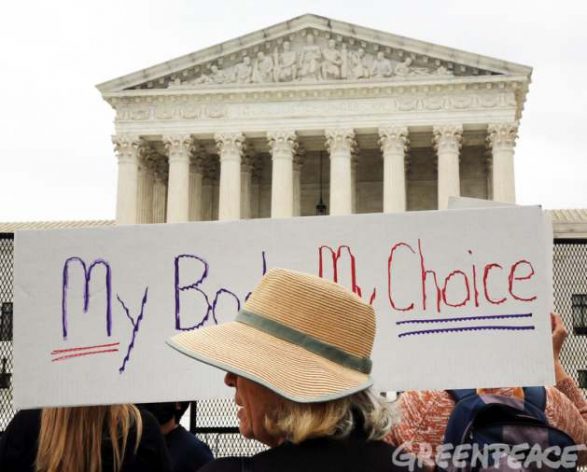 A half-century of reproduction rights upended by the Supreme Court. Credit: Greenpeace.

PORTLAND, USA, Jul 18 2022 (IPS) - The 24 June decision of United States Supreme Court to overturn the country’s nearly 50-year constitutional right of a woman to an abortion is being felt worldwide.

In addition to the objections and protests to the court’s landmark decision within the United States, governments, world leaders, and others have expressed their concerns and dissatisfaction about the overturning a woman’s constitutional right to an abortion.

The court’s decision to overturn the constitutional right to an abortion established in 1973 is at odds with the views of a broad majority of the public. No less than two-thirds of U.S. adults did not want the court to overturn the 1973 decision

The European Union’s parliament overwhelmingly condemned the decision ending the constitutional protections of women for abortion in the United States. Fearing the expansion of anti-abortion movements in Europe, the parliament also called for safeguards to abortion rights be enshrined in the EU’s fundamental rights charter and protections be adopted across the EU.

The Director General of the World Health Organization was very disappointed with the decision and the United Nations High Commissioner for Human Rights called the court’s decision a major setback. Access to safe, legal, and effective abortion, the Commissioner stressed, is firmly rooted in international human rights law.

Objections to the decision came from many government leaders worldwide. The Prime Minister of the United Kingdom, for example, saw the decision as a big step backwards. Accusing the court of diminishing the rights of U.S. women, the President of France said that abortion is a fundamental right of all women.

The German Chancellor viewed the decision as a threat to the rights of women, as did New Zealand’s Prime Minister who saw it as a loss for women everywhere. The Belgian Prime Minister expressed concerns about the signal the decision sends to the rest of the world about a woman’s right to an abortion.

Fifty years ago, various U.S. states criminalized a woman having an abortion. In 1973 in the case Roe v. Wade, the Supreme Court’s majority of seven justices established a woman’s constitutional right to an abortion in all 50 states (Table 1). 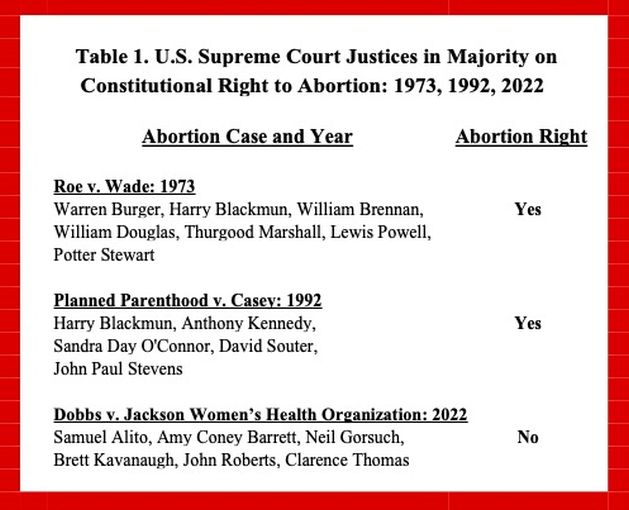 The justices concluded that state statutes criminalizing abortion in most instances violated a woman’s constitutional right of privacy, which it found to be implicit in the liberty guarantee of the due process clause of the Fourteenth Amendment in the U.S. Constitution.

Thirty years ago, the Supreme Court revisited Roe v. Wade in the 1992 case of Planned Parenthood v. Casey. A majority of five justices reaffirmed a woman’s right to an abortion but imposed a new standard to determine the validity of laws restricting abortions.

The new standard asks whether a state abortion regulation has the purpose or effect of imposing an “undue burden”, which is defined as a substantial obstacle in the path of a woman seeking an abortion before the fetus attains viability.

In June 2022, in the case of Dobbs v. Jackson Women’s Health Organization a majority of six justices concluded that the 1973 and 1992 abortion decisions of a dozen former justices were egregiously wrong in their legal reasoning that led to erroneous decisions concerning the right to an abortion.

After nearly a half century of women having a constitutional right to an abortion enshrined in the 1973 decision and reaffirmed in the 1992 decision, six justices of the current Supreme Court concluded that there is no such constitutional right. In the dissenting opinion, the court’s remaining three justices wrote that the U.S. will become an international outlier after the decision.

The court’s decision to overturn the constitutional right to an abortion established in 1973 is at odds with the views of a broad majority of the public. No less than two-thirds of U.S. adults did not want the court to overturn the 1973 decision.

In addition, a majority of Americans, approximately 60 percent, and President Biden with the backing of many Democratic leaders support Congress passing a law establishing a nationwide right to abortion. Such a law would protect a woman’s right to choose whether or not to have an abortion.

In contrast, a comparatively small minority of Americans, 13 percent in 2022, are opposed to abortion, with some, including Republican leaders, considering a federal abortion ban for all fifty states. Since 1975, the annual proportion of Americans who say abortion should be illegal in all circumstances has varied from a low of 12 percent in 1990 to a high of 22 percent in 2002 (Figure 1). 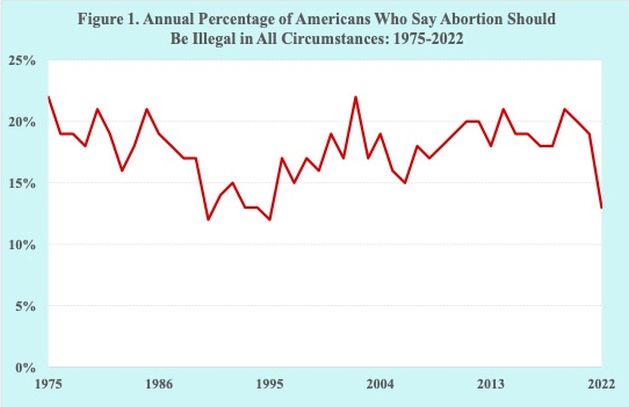 In addition, the United States has become a patchwork of abortion laws and given rise to a myriad of enforcement regulations, numerous court cases, and challenging legal questions. Abortion is now banned in at least nine states and more bans are expected in the near future. In some states, such as Alabama, Arkansas, Mississippi, Missouri, and South Dakota, abortion is banned with no exceptions for rape or incest.

Also, many state legislatures are considering ways of stopping or criminalizing out of state abortions. They are also proposing banning or tightly restricting the use of abortion medication, which was approved in 2000 by the U.S. Food and Drug Administration and accounted for an estimated 54 percent of the country’s abortions in 2020. In response, other states are advancing legislation and executive orders protecting patients and providers from legal risks outside their borders.

The Supreme Court’s recent decision finding no constitutional right to an abortion has raised concerns that other rights not enumerated in the U.S. Constitution are at risk of being overturned. Among those rights are same-sex marriage, same-sex relationships, and contraceptives.

In a concurring opinion to the recent abortion decision, for example, one of the court’s justices indicated that other precedents should be reconsidered. He also mentioned that future legal cases could curtail other rights not clearly addressed in the U.S. Constitution.

The court’s abortion decision may also embolden abortion opponents, influence policymakers, and affect reproductive health programs in other countries as well. The decision puts U.S. alongside several other countries, including Poland, El Salvador, and Nicaragua, that have backtracked on or restricted abortion policy in recent decades.

However, the court’s abortion decision runs counter to recent global liberalization trends on reproductive rights. During the past three decades about 60 countries have expanded laws and policies relating to reproductive rights, including legal access to abortion.

In sum, the recent decision of the U.S. Supreme Court has not only revoked the nearly 50-year constitutional right of a woman to an abortion, but it is also now out of sync with the increasing worldwide recognition of fundamental reproductive rights, including a woman’s right to an abortion.