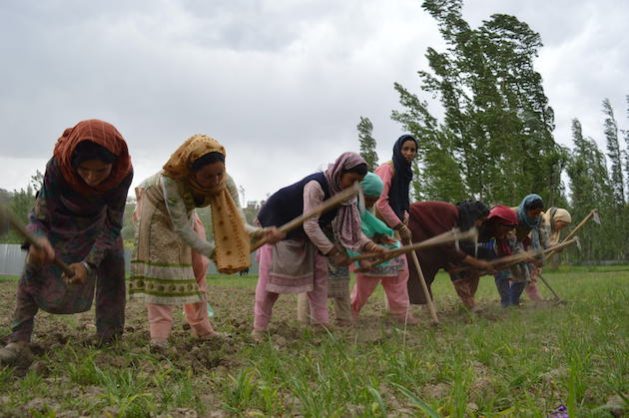 Mumtaza Bano (centre), is ploughing the field along with other women in her village in south Kashmir. Farmers in the region have experienced a heat wave which has turned much of the area, known for lush green hills, into a dry wasteland. Credit: Umar Manzoor Shah/IPS

Srinagar, Indian Kashmir, Jul 13 2022 (IPS) - The soaring temperatures this year in India’s northern state of Kashmir are proving calamitous for the region’s farming community.  The place, otherwise known for its emerald streams, lush green hills, and ice sheets, is reeling under heat attributed to climate change this year. The heat wave of such intensity has left most of the water canals dead and dry, plunging the already conflict-torn region into a frightening agrarian crisis.

Perturbed and dismayed, Ghulam Mohammad Mir is trying to sow a paddy crop on his two-acre plot in central Kashmir’s Ganderbal area. Mir says his months of hard work would probably get wasted as the land has almost turned barren due to scorching heat and water scarcity.

“We are witnessing the temperatures spiking as high as 37 degrees Celsius. Such heat wave was otherwise alien to Kashmir. You can see the land looks barren, and if we sow any crop here, we fear it would turn into dry, dead twigs in the coming days. The scenes are scary to imagine. There is little water accumulated by the rain left in the fields,” Mir told IPS. 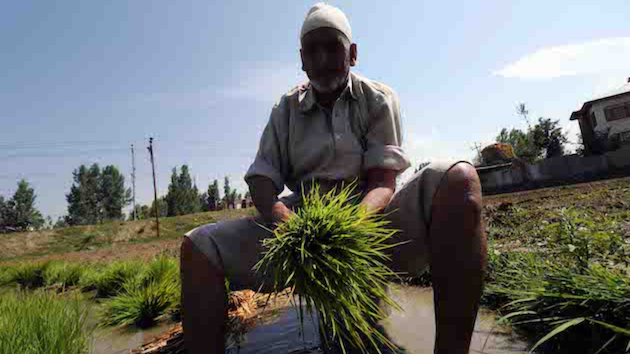 Ghulam Mohammad Mir is sowing a paddy crop on his two-acre land located in central Kashmir’s Ganderbal area. Mir says his months of hard work will probably get wasted as the land has almost turned barren in the unrelenting heat. Credit: Umar Manzoor Shah/IPS

The farmer, who is in his late 50s, says he has been in paddy cultivation since childhood but has never seen the drying of the land with such intensity.  Mir says the water canals were never as dry as they are today, and in the first three months after spring – from March to June, there was no rainfall, and then it rained heavily for four days, suddenly plummeting the temperatures to mere 15 degrees Celsius.

“And then, the mercury surged again, and within a mere one week, the temperatures surged to almost 37 degrees. Where will we get water to irrigate our fields now? The paddy will burn amid such scorching heat. This is disastrous to the core,” Mir said.

According to the research titled ‘Climate Change Projection in Kashmir Valley’ conducted by the region’s agriculture university, the states of Jammu and Kashmir are impacted by climate change. The state, claims the research, is expected to have a surge in the number of rainy days by 2030.

“Similarly, the annual temperature is likely to increase in the next century compared to the base period of 1970. An increasing trend in annual maximum and minimum temperature, as well as precipitation, has also been predicted for the region under Special Report on Emissions Scenarios (SRES).”

Over the years, the valley has experienced irregular precipitation patterns. In the first five months of 2022, Kashmir saw a 38 percent decrease in rainfall, according to data from the Meteorological Department (MeT) in Srinagar. The data reveals that the Kashmir valley has experienced a significant lack of pre-monsoon precipitation over the years. From March 1 to May 31, 2022, the region got 99.5 mm of rain, a 70 percent down from the average. Comparably, between March and May of each of the following years—2017, 2018, 2019, 2020, and 2021—there was a deficit of 16, 28, 35, and 26%, respectively.

Mohammad Iqbal Choudhary, the Director of the Department of Agriculture and Farmers Welfare Kashmir, told IPS that most irrigation canals have turned dry in Kashmir. As a result, the majority of paddy fields have been left uncultivated.

Dr Arshid Jahangir, who teaches Environmental Studies at the University of Kashmir, said climate models indicate a pretty bleak outlook for the region.

In the future, Jahangir says extreme events will happen more frequently in the Himalayas, which includes Kashmir.

“The Kashmir region has had numerous extreme weather occurrences in the last ten years, including floods, frequent cloudbursts, heat waves, droughts, landslides, and early snowfalls. In Kashmir’s climate history, such occurrences were never typical. These extreme events won’t just keep happening; their frequency will also rise. Aside from the financial losses, everyone’s lives are in danger as a result of this,” he said.

For farmers like Mir, if the situation doesn’t improve, they will have no choice but to abandon farming forever.

“You see, our children do not want to do this work. They ask, ‘what is the fun of toiling so hard only to get losses in the end?’ We could sell this land off and do some other business,” Mir said.

Most Kashmiris are farmers, using various techniques adapted to the region’s environment. Rice is planted in May and harvested in September. The main summer crops are maize, sorghum, millet, pulses, tobacco, and cotton, and the main spring crop is barley.

In south Kashmir’s Pulwama area, Mumtaza Bano was busy ploughing her two-acre land with her husband. However, Bano seems pessimistic about having a profitable yield this year.

“The soil looks hard, and it is tough to plough it through. It is July, and we are without any irrigation facility here. The canals are running dry, and so are our hopes of a good yield. This entire village is considering abandoning farming now and doing some other work. It is just a waste of time now,” Bano said.

“Global climate change is a reality. There would be extended dry spells interspersed with high-intensity, long-duration downpours. There is a trend when we look over the past 30 to 50 years. Snowfall in the winter is currently below average. The autumn is becoming dryer. The rainy spring is drying up. This is why the crisis needs global attention so that we can mitigate it,” Ramsoo said.
IPS UN Bureau Report