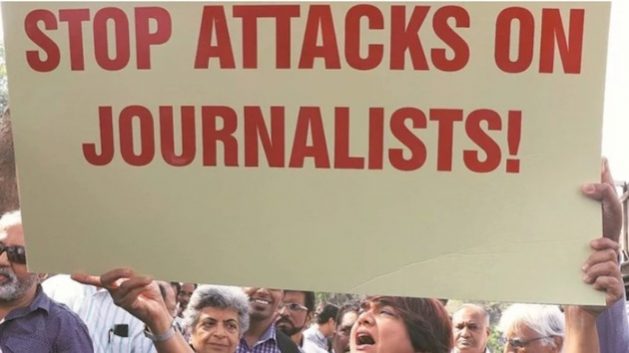 Journalists, writers, both local and international, have called on the authorities in India to respect human rights and release imprisoned writes and dissident and critical voices. Protests about media freedom have become more urgent in recent years since this protest by the Mumbai Press Club. Credit: Facebook

Lucknow, Aug 17 2022 (IPS) - On the eve of India’s 76th Independence Day, the president of the country, Droupadi Murmu, received a letter signed by 102 international writers, including authors from India and the Indian diaspora expressing “grave concerns about the rapidly worsening situation for human rights” and calling for the release of imprisoned writers and “dissident and critical voices”.

Salman Rushdie signed the letter before the attack on him on August 12, 2022. Rushdie joined PEN America and PEN International, two worldwide associations of writers, to convey his anguish to the highest office in India.

Dated August 14, 2022, the letter urged the President of India to support the democratic ideals promoting and protecting free expression in the spirit of India’s independence and to restore India’s reputation as an inclusive, secular, multi-ethnic and -religious democracy where writers can express dissenting or critical views without threat of detention, investigation, physical attacks, or retaliation.

“Free expression is the cornerstone of a robust democracy. By weakening this core right, all other rights are at risk and the promises made at India’s birth as an independent republic are severely compromised,” the writers emphasised.

In its Freedom to Write Index 2021, PEN America considered India the only “nominally democratic country” among the “top 10 jailers” of writers and public intellectuals worldwide. The letter highlighted the arrest of writers, including poet Varavara Rao who was recently granted bail.

The “grave concern” regarding threats to free expression and other core rights has grown steadily in recent years.

The signatories underlined that writers and public intellectuals were “subject to arrest, prosecution, and travel bans intended to restrain their free speech”.

In yet another PEN America initiative, 113 authors from India and the Indian diaspora have contributed to a collection reflecting on the state of free expression and democratic ideals. Titled India at 75, the collection includes original writings by Salman Rushdie, Jhumpa Lahiri, Geetanjali Shree, Rajmohan Gandhi and Romila Thapar, among others.

Rushdie writes that India’s “dream of fellowship and liberty is dead, or close to death”.

“Then, in the First Age of Hindustan Hamara, our India, we celebrated one another’s festivals, and believed, or almost believed, that all of the land’s multifariousness belonged to all of us. Now that dream of fellowship and liberty is dead, or close to death. A shadow lies upon the country we loved so deeply. Hindustan isn’t hamara anymore. The Ruling Ring—one might say—has been forged in the fire of an Indian Mount Doom. Can any new fellowship be created to stand against it?”

On August 15, India celebrated 75 years of independence from colonial rule. The country has yet to conquer poverty, but the largest democracy in the world did enjoy an excellent track record of encouraging free and fair media.

However, press freedom, as well as the unity of the country, is threatened by communal politics. A large section of mainstream media has turned pro-government, especially after the general elections in the spring of 2019. Ever since pressure has increased on the media to toe the line of the Hindu nationalist government. For the same reason, it is often difficult to distinguish between a ruling party spokesperson and a journalist in India today.

“At centre stage of media are views of political parties, their respective spokespersons making more noise than saying anything substantive on the electronic media,” Anand Vardhan Singh, Lucknow-based senior journalist and founder of YouTube channel The Public, told the IPS.

Singh regrets that the people in power have fragmented the national media between English versus regional languages, print versus electronic versus social media.

Investigative journalism is a thing of the past. The reporting aspect of media has taken a backseat.

This year’s independence day celebration will be remembered for what 9-year-old Mehnaz Kappan said.

“I am Mehnaz Kappan, daughter of journalist Siddique Kappan, a citizen who has been forced into a dark room by breaking all freedom of a citizen”.

Siddique Kappan is a Delhi-based journalist from Kerala. He was arrested in October 2020 on his way to Hathras, a poverty-stricken village in north India in Uttar Pradesh, to report on the rape and murder of a 19-year-old Dalit woman.

“Attempts to demean, belittle, and outlaw dissent and protest and the problem of growing communalisation are the principal challenges the country faces today. A journalist needs nerves of steel and tremendous courage to continue to ask questions,” senior journalist and founding editor of The Wire, Siddharth Varadarajan, said. 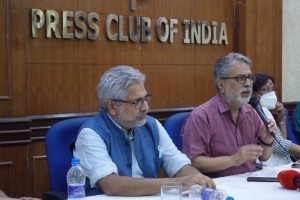 Siddharth Varadarajan, foundering editor of The Wire has also been targeted. Credit: The Wire

Like many others, Varadarajan, too, was punished for speaking out, and court cases are filed against him. Many journalists are booked for sedition to intimidate those scribes who refuse to toe the line of people in power.

The problem is that mainstream media has stopped questioning the government. Public interest is no longer on the mind of the media. The purpose of mainstream journalists, nicknamed ‘godi’ media or ‘cozy’ journalism, is only to praise those in power.

The media has abrogated its responsibility of asking questions, and those journalists who question, like Mohammad Zubair (33), are put into jail. The arrest of journalist Zubair marks a new low for press freedom in India, where the government has created a hostile and unsafe environment for members of the press. Zubair was arrested because AltNews,  a fact-checking website he co-founded, frequently exposed claims made by the government, making him an obstacle to false propaganda. Zubair was arrested last June. He spent 23 days in prisons and police custody in Delhi and Uttar Pradesh and was released on July 23, 2022, after the Supreme Court granted interim bail to him.

Soon after he had walked out of prison, Zubair told the national daily The Hindu that he thinks his arrest was made an example for others.

Zubair said that multiple First Information Reports (FIR) filed against him were a message from the government that it could book 10-15 random FIRs in different states to keep one in jail for years. Zubair was released after a Supreme Court ruling to grant him bail. The FIRs filed against Zubair are random and bizarre, like two FIRs in Uttar Pradesh are for fact-checking a media channel-which is his job. There is another FIR for calling an accused in a hate speech case a hate monger in a tweet!

Zubair happens to be a Muslim. Another Muslim journalist Sana Mattoo was prevented from flying abroad for a book release. To intimidate Zubair, money-laundering charges were filed against him. Maria Ressa, the Nobel Prize-winning journalist from the Philippines, said that she was shocked at the arrest of Zubair and human rights activist Teesta Setalvad. Ressa told a digital media reporter in India that all journalists should unite to oppose what has happened.

In a population of 1.4 billion people, 14 percent are Muslim, but the practice of majoritarian politics in recent times has made the ruling party increasingly intolerant of Muslim voices in the country. Kappan, a Muslim, was denied bail.

Millions of tweets are directed at journalist Rana Ayyub, another Muslim, making her one of the most brutally targeted journalists in the world.

Ayyub, an independent journalist and a Washington Post columnist, has used her social media heft and the global attention she receives to highlight the plight of Indian Muslims and the arrest of journalists in India. She was accused of money laundering and tax fraud related to her crowdfunding campaign to help those affected by the COVID-19 pandemic in 2020.

“Relentless misogynistic and sectarian attacks online against journalist Rana Ayyub must be promptly and thoroughly investigated by the Indian authorities, and the judicial harassment against her brought to an end at once,” the statement said.

For the same reason, India ranks as one of the most dangerous and restrictive countries for journalists today. Despite its secular and democratic status, India is ranked 142nd in the Reporters Without Borders 2021 World Press Freedom Index.

There are other ways to make journalists feel uncomfortable. Notices were sent to the Indian Women Press Corps (IWPC) to vacate the accommodation allotted to them as their lease will soon end. A similar notice was also sent to South Asia’s Foreign Correspondents’ Club. Both organisations are Delhi based.

Shobhna Jain, President of IWPC, said, “It’s a routine procedural thing. The government is giving us renewals, and we are quite hopeful that this year too, we will get the lease renewed for a longer period”.

The IWPC is the country’s first association of women journalists, founded in 1994 as a support group to help women meet challenges unique to women. It was to ensure that women’s by-lines were respected and heard. Today more than 800 women are members of the IWPC who use the premises to network, access news sources, exchange information and share experiences to advance the profession. Located in the heart of New Delhi and equipped with a library and computer centre, the premises are a boon for journalists wanting to save time from commuting in the city.

Often children accompany the women journalist as she works while they play on the premises. Here press conferences are organised and exclusive interactions with newsmakers.

July this year was a terrible month for journalists around Asia.

On July 3, journalist Hasibur Rehman Rubel left his office in the Kushtia district in western Bangladesh, never to return. On July 7, his decomposed body was found in a river.

On July 7, Peer Muhammad Khan Kakar, a Pakistani journalist, was arrested in the Loralai district of southwest Balochistan on complaints related to his Facebook posts.

On the same day in July, Ressa’s prison sentence was increased by several months. A court in the Philippines affirmed the libel conviction of Ressa, Rappler’s head and co-founder.

Two days later, on July 9, members of a television team were attacked in Sri Lanka. The paramilitary police Special Task Force assaulted journalists reporting a protest in the capital city of Colombo.

The BBC reported that a video journalist in Colombo was allegedly punched by a member of the Sri Lankan army, his phone snatched, and footage deleted.

What is the solution to the vicious attack on journalists today? According to Varadrajan, it is unity amongst all media persons that can together fight the assault on the media and freedom of speech in the country.

Despite differences in political beliefs, scribes need to stand by each other today like never before. Varadrajan suggests building a team of lawyers to defend media persons in court.