Before speaking at the UN Transforming Global Education Summit, Secretary-General António Guterres addressed the SDG Moment in the General Assembly Hall on September 19. “I regard myself as a lifelong student…Without education, where would I be? Where would any of us be?” he asked those gathered in the iconic General Assembly Hall. Credit: UN Photo/Cia Pak

NEW YORK, Sep 26 2022 (IPS) - Just a week ago, the international community commemorated the adoption of the United Nations Declaration and Programme of Action on a Culture of Peace, a monumental document that transcends boundaries, cultures, societies, and nations.

That inspirational action took place on 13 September 1999, yes 23 years ago. It was an honor for me to Chair the nine-month long negotiations that led to the adoption of this historic norm-setting document through consensus by the United Nations General Assembly. That document asserts that inherent in the culture of peace is a set of values, modes of behaviour and ways of life.

The quest for peace is the longest ongoing human endeavor going on, but it runs alongside many of the things that we do on a daily basis. Peace is integral to human existence — in everything we do, in everything we say and in every thought we have, there is a place for peace. We should not isolate peace as something separate or distant.

My work has taken me to the farthest corners of the world. I have seen time and again the centrality of the culture of peace and women’s equality in our lives. This realization has now become more pertinent amid the ever-increasing militarism, militarization and weaponization that is destroying both our planet and our people. 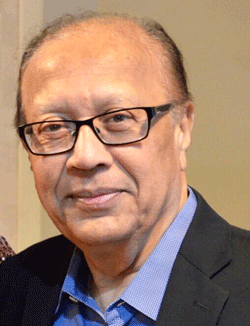 In my introduction to the 2008 publication “Peace Education: A Pathway to the Culture of Peace”, I wrote that as Maria Montessori had articulated so appropriately, those who want a violent way of living, prepare young people for that; but those, who want peace have neglected their young children and adolescents and that way are unable to organize them for peace.

However, the last decades of violence and human insecurity had led to a growing realization in the world of education today that children should be educated in the ways of peaceful living. The task of educating children and young people to find non-aggressive means to relate to one another is of primary importance.

As a result, more and more peace concepts, values, and social skills are being integrated into school curricula in many countries.

Peace education needs to be accepted in all parts of the world, in all societies and countries as an essential element in creating the culture of peace. To meet effectively the challenges posed by the present complexity of our time, the young of today deserves a radically different education – “one that does not glorify war but educates for peace, non-violence and international cooperation.”

They need the skills and knowledge to create and nurture peace for their individual selves as well as for the world they belong to. Learning about the culture of peace having the potential of personal transformation should be incorporated in all educational institutions as part of their curricula and that should become an essential part of our educational processes as reading and writing.

All educational institutions need to offer opportunities that prepare the students not only to live fulfilling lives but also to be responsible and productive citizens of the world.

Often, people wonder whether peace education should be introduced when the child is very young. I believe rather strongly that all ages are appropriate for such education – only the method of teaching has to be suited to the age.

For younger children, such teaching should include audio-visual materials and interactive exchanges. Teaching the value of tolerance, understanding and respect for diversity among the school children could be introduced through exposing them to various countries of the world, their geography, history, and culture.

To begin with, an informal class format could help. Such a format could even be included in any of the existing arrangements that involve social studies or general knowledge classes.

In addition to expanding the capacity of the students to understand the issues, peace education should aim particularly at empowering the students, suited to their individual levels, to become agents of peace and nonviolence in their own lives as well as in their interaction with others in every aspect of their lives.

Targeting the individual is meaningful because there cannot be true peace unless the individual mind is at peace. Connecting the role of individuals to broader global objectives, Dr. Martin Luther King Junior affirmed that “An individual has not started living until he can rise above the narrow confines of his individualistic concerns to the broader concerns of all humanity.”

Peace education is more effective and meaningful when it is adapted according to the social and cultural context and the country’s needs and aspirations. It should be enriched by its cultural and spiritual values together with the universal human values.

It should also be globally relevant. Indeed, such educating for peace should be more appropriately called “education for global citizenship”.

The 2030 Agenda for Sustainable Development of the United Nations in its sustainable development goal (SDG) number 4 and target 7 includes, among others, promotion of culture of peace and non-violence, women’s equality as well as global citizenship as part of the knowledge and skills needed to promote sustainable development. It also calls on the international community to ensure that all learners acquire those by the year 2030.

Recognizing that education is a foundation for peace, tolerance, human rights and sustainable development, Secretary-General Antonio Guterres had convened a Transforming Education Summit (TES) which concluded yesterday at the UN. Its three overarching principles are: Country-led, Inclusive, and Youth-inspired.

Let me conclude by emphasizing that the role of education should be to encourage the young people to be themselves, to build their own character, their own personality, which is embedded with understanding, tolerance, and respect for diversity and in solidarity with rest of humanity. That is the significance of the Culture of Peace. It is not something temporary or occasional like resolving a conflict in one area or between communities without transforming and empowering people to sustain peace.

Peace education needs to be transformative, forward-looking, adaptive, comprehensive, and, of course, empowering.

Let us resolve at this conference to campaign for the proclamation by the UN of a Global Peace Education Day to transform the role of education in embracing the culture of peace and global citizenship – as emphasized by the United Nations – for the good of humanity, for the sustainability of our planet and for making our world a better place to live.

Ambassador Anwarul K. Chowdhury is Founder of the Global Movement for The Culture of Peace (GMCoP), Permanent Representative of Bangladesh to the UN (1996-2001) and Under-Secretary-General and High Representative of the United Nations (2002-2007)

This article is based on a presentation made by Ambassador Chowdhury as the Distinguished Featured Speaker at the Second Conference on Global Peace Education Day on 20 September 2022.