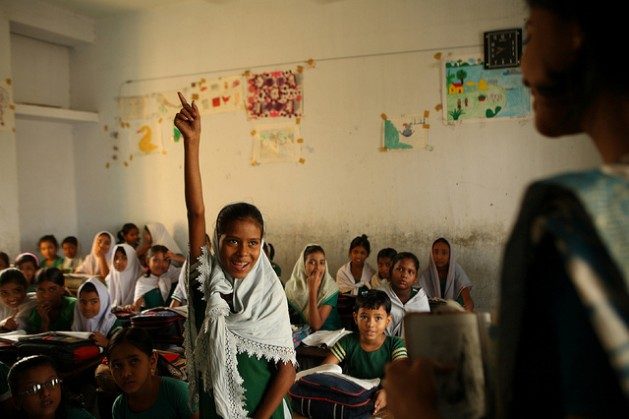 There are 244 million children out of school. Credit: Shafiqul Alam Kiron/IPS

MADRID, Sep 7 2022 (IPS) - More than two-thirds of 10-year-olds are unable to read and understand a simple text. This shocking finding should be enough to be alarmed about the horrifying fate of an entire generation. But there is much more.

In fact, there are 244 million children still out of school, while educational centres are victims of armed attacks.

And millions more are falling prey to recruitment, enslavement, vital organs extraction, obliged displacements, drowning in the sea in migration journeys, homelessness, sexual violence, maiming, and a too long etcetera.

The above is to be added to other shocking facts like that 800 million girls are forced to be mothers, and that more than 200 million girls have already fallen prey to a dangerous, abhorrent practice, which is carried out in the name of social and religious traditions.

Also that 160 million plus are victims of forced labour, the double of a big European country’s -Germany- total population.

The world’s children are also exposed to grave health problems as a consequence of the “shocking, insidious, exploitative, aggressive, misleading and pervasive” marketing tricks used by the baby formula milk business with the sole aim of increasing, even more, their already high profits, as revealed by the World Health Organization (WHO).

Moreover, school closures and disruptions caused by the pandemic have likely driven learning losses and drop-outs. In the aftermath of the pandemic, nearly 24 million learners might never return to formal education, out of which, 11 million are projected to be girls and young women.

Grave violations affect boys and girls differently. Whereas 85% of children recruited and used were boys, 83% of sexual violence was perpetrated against girls, adds the UN Educational, Scientific and Cultural Organization (UNESCO) to all the above.

The bell is ringing for the start of a new school year in many countries, but inequalities in access to education are keeping some 244 million children out of the classroom, according to data published on 1 September 2022 by UNESCO.

Sub-Saharan Africa remains the region with the most children out of school, 98 million, and it is also the only region where this number is increasing.

The Central and Southern Asia region has the second highest out-of-school population, with 85 million.

In addition to being sold in refugee camps, up to 50% of refugee girls in secondary school may not return, when their classrooms reopen after COVID-19, whilst 222 million girls were not able to be reached by remote learning during the pandemic.

The data has been provided by Education Cannot Wait (ECW), the UN global fund for education in emergencies and protracted crises, which also focuses on the staggering gender-based violations.

Girls impacted by the horrors of war and displacement in places like the Democratic Republic of the Congo, Ethiopia, Mali, Nigeria, Pakistan, Somalia, South Sudan, Sudan, Ukraine and Yemen face even greater risks, such as gender-based violence, early child-marriage and unwanted pregnancies.

According to ECW’s recent Annual Results Report, conflict, forced displacement, climate-induced disasters and the compounding effect of the COVID-19 pandemic fueled increased education in emergencies’ needs with funding appeals reaching US$2.9 billion in 2021, compared with US$1.4 billion in 2020.

The Global Coalition to Protect Education from Attack has elaborated a global study of attacks on schools, universities, their students and staff, in 2020 and 2021.

Education is under attack around the world, warns the study. From Afghanistan to Colombia, Mali to Thailand, “students and teachers are killed, raped, and abducted, while schools and universities are bombed, burned down, and used for military purposes.”

According to the Education under Attack 2022:

Despite all the above, the world’s richest countries continue to be devoted to spending more than two trillion US dollars on weapons that kill tens of thousands of innocent children.

Just see this: Spending on Nuclear Weapons — US$105 Billion a Year; US$300 Million a Day, US$12 Million an Hour. A tiny portion of this amount would suffice to grant the basic human right to education to hundreds of millions of children, right?