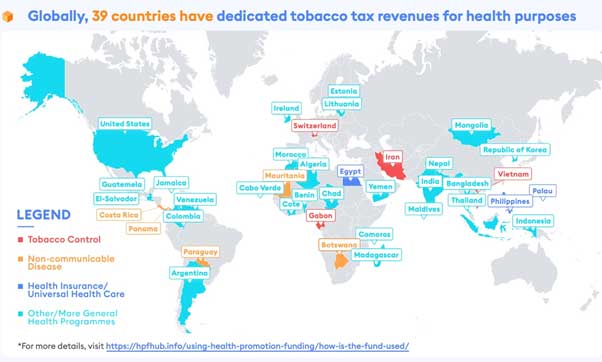 BANGKOK / PENANG, Sep 20 2022 (IPS) - Economic recovery since the COVID-19 pandemic has been uneven amidst a cautious loosening of restrictions. But even at the height of the pandemic, it was business as usual for the tobacco industry.

Tobacco companies remain profitable, making US$ 912.3 billion in 2022 and capitalizing on the situation by promoting and selling their lethal products while convincing governments that their industry should not be penalised during the pandemic, claiming tobacco is a good investment.

This is an industry that perpetuates an annual loss of US$ 1.4 trillion in global health costs and lost productivity, amounting to 1.8% of the world’s GDP. 14% of all deaths globally (over 8 million deaths annually) are due to non-communicable diseases (NCDs) directly caused by tobacco consumption and exposure to secondhand smoke.

Yet, total healthcare spending is not prioritized enough and remains scarce in many low- and middle-income countries, leaving precious little funds for health promotion programs to counter the devious marketing tactics of the tobacco industry. In low-income countries, health expenditures as a share of government spending fell to 6.8% in 2016 from 7.9% in 2000.

Low- and middle-income countries must increase their health expenditures to achieve the SDGs. Credit: SEATCA

In addition to its destructive impact on our bodies, tobacco is also horrible for the environment. With about 1.3 billion smokers consuming an estimated 6.25 trillion cigarettes worldwide each year, tobacco smoke releases significant amounts of cancer-causing substances, poisons, and pollutants into the air.

In fact, tobacco causes significant damage throughout its cycle – from cultivation, manufacture, and distribution, to consumption and post-consumption. Cigarettes are reportedly the most pervasive single-use plastic product on Earth, costing about US$ 20 billion per year in ecosystem losses from the plastic waste that enters our oceans.

COVID-19 has been an unshakable constant in our lives for more than two years now, and it is far from over. But we cannot forget that tobacco is a pandemic too.

According to the World Health Organization (WHO), investing in tobacco control offers the best returns on investment for protecting public health. The Secretariat of the WHO Framework Convention on Tobacco Control (FCTC) has worked with governments, the UN Development Program, and WHO to develop country-tailored investment cases that quantify the economic benefits of implementing tobacco control policy measures.

And on the flipside are the costs of inaction. Aggregated across 25 countries, these investment cases show that urgent action will potentially save 1.4 million lives and US$ 74 billion.

Tobacco control is not only essential for achieving Sustainable Development Goal (SDG) Target 3.4, a one-third reduction in premature mortality from NCDs by 2030, it is also important for the achievement of all the SDGs.

182 countries are Parties to the international tobacco control treaty – the WHO FCTC – and are legally bound to allocate national funds and identify bilateral/multilateral funding sources to support the implementation of treaty measures.

However, governments are only allocating an average of US$ 15 million in annual domestic funding per country for tobacco control, only half of what is required, and mostly in high-income countries. A WHO FCTC Investment Fund was authorized in 2021 to raise additional funds to support treaty implementation as well, but finances remain tight.

Establishing a tax-based health promotion funding mechanism is an innovative way to generate sustainable and transparent financing for health and development. But it is not entirely new.

Health taxes on tobacco, alcohol, and sugar-sweetened beverages are the most cost-effective measure for reducing NCDs. These taxes reduce consumption of these products and their related healthcare costs and are a reliable domestic funding stream for health spending.

In 2021, at least 39 countries reported earmarking a percentage of tobacco taxes to be used specifically for various health promotion programs, in effect making the polluter pay for its pollution instead of cutting into existing government budgets.

In Thailand, approximately US$ 150 million in annual revenue from a 2% surcharge on tobacco and alcohol excise taxes is dedicated for the implementation of multiple health promotion plans including tobacco control, alcohol and substance abuse control, road safety, and in recent years, COVID-19 prevention. 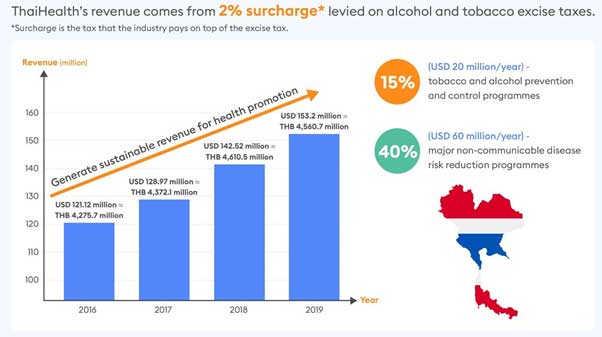 These examples show that health promotion funding mechanisms can thrive despite a pandemic. Legislative measures are critical to establish the legitimacy of these funding mechanisms, provide transparency and accountability measures for the proper management of funds, and protect against interference from harmful businesses with vested interests.

Tobacco control makes sense from a health, economic, sustainable development, and environmental perspective. When governments are strapped for cash, dedicated health taxes are an innovative way of ensuring adequate financing for public health.

SEATCA is a multi-sectoral non-governmental alliance promoting health and saving lives by assisting ASEAN countries to accelerate and effectively implement the tobacco control measures contained in the WHO FCTC. Acknowledged by governments, academic institutions, and civil society for its advancement of tobacco control in Southeast Asia, the WHO bestowed on SEATCA the World No Tobacco Day Award in 2004 and the WHO Director-General’s Special Recognition Award in 2014.