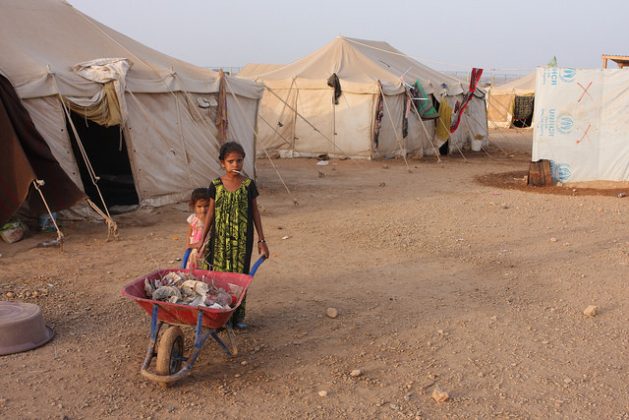 Between 2010 and 2020 the number of state-based armed conflicts roughly doubled (to 56), as did the number of conflict deaths, finds new report. Credit: James Jeffrey/IPS

MADRID, Sep 20 2022 (IPS) - Day after day, the world’s scientific community, based on solid investigations, elaborates dozens of studies identifying the causes of the existing emergencies facing humanity. They also prepare understandable summaries and conclusions and propose feasible solutions to the current crises and ways to prevent major future risks.

Such studies are promptly submitted to politicians, both directly and through hundreds of summits, conferences, forums and meetings.

Are they just unable to read and understand these texts?

In combination, the security and environmental crises are creating compound, cascading, emergent, systemic and existential risks. Without profound changes in approach by institutions of authority, risks will inevitably proliferate quickly

If so, they should probably be added to the shameful finding that up to 70% of children –or nearly 250 million– are illiterate, sentenced to ignorance as revealed by numerous findings, including those of the Education Cannot Wait (ECW), the UN global fund for education in emergencies and protracted crises.

Meanwhile, the world is “stumbling into a new era of unpredictable risks,” while the ongoing multiple and deepening crises have “pushed 9 out of 10 countries backwards in human development.”

Both facts unveil the failure of the world’s politicians to act for people rather than announcing decisions that end up benefiting big private businesses.

Two major reports have revealed such a stark failure. One of them was released on 8 September 2022 by UNDP–the UN Development Programme’s Human Development Report: “Uncertain Times, Unsettled Lives: Shaping our Future in a Transforming World.”

The other one “Environment of Peace: Security in a New Era of Risk” was published on 23 May this very year by the prestigious Stockholm International Peace Research Institute (SIPRI).

“World leaders are failing to prepare for a new era of complex and often unpredictable risks to peace as profound environmental and security crises converge and intensify,” highlights SIPRI, the independent international institute dedicated to research into conflict, armaments, arms control and disarmament.

Its report paints a vivid picture of the escalating security crisis. For example, it notes that between 2010 and 2020 the number of state-based armed conflicts roughly doubled (to 56), as did the number of conflict deaths.

“The number of refugees and other forcibly displaced people also doubled, to 82.4 million. In 2020 the number of operationally deployed nuclear warheads increased after years of reductions, and in 2021 military spending surpassed $2 trillion for the first time ever.”

Regarding the environmental crisis, SIPRI warns that around a quarter of all species are at risk of extinction, pollinating insects are in rapid decline and soil quality is falling, while exploitation of natural resources such as forests and fish continues at unsustainable levels.

“Climate change is making extreme weather events such as storms and heatwaves more common and more intense, reducing the yield of major food crops and increasing the risk of large-scale harvest failures.”

For its part, the Human Development Report warns that the world is lurching from crisis to crisis, trapped in a cycle of firefighting and unable to tackle the roots of the troubles that confront the world.

The report argues that “layers of uncertainty are stacking up and interacting to unsettle life in unprecedented ways.”

The last two years have had a devastating impact for billions of people around the world, when crises like COVID-19 and the war in Ukraine hit back-to-back, and interacted with sweeping social and economic shifts, dangerous planetary changes, and massive increases in polarisation, says UNDP.

“Without a sharp change of course, we may be heading towards even more deprivations and injustices.”

For the first time in the 32 years that UNDP has been calculating it, the Human Development Index, which measures a nation’s health, education, and standard of living, has declined globally for two years in a row.

“The reversal is nearly universal as over 90 percent of countries registered a decline in their Human Development Index score in either 2020 or 2021 and more than 40 percent declined in both years, signalling that the crisis is still deepening for many.”

While some countries are beginning to get back on their feet,it adds, “recovery is uneven and partial, further widening inequalities in human development.” Latin America, the Caribbean, Sub-Saharan Africa and South Asia have been hit particularly hard.

“The world is scrambling to respond to back-to-back crises. We have seen with the cost of living and energy crises that, while it is tempting to focus on quick fixes like subsidising fossil fuels, immediate relief tactics are delaying the long-term systemic changes we must make,” says Achim Steiner, UNDP Administrator.

“We are collectively paralyzed in making these changes. In a world defined by uncertainty, we need a renewed sense of global solidarity to tackle our interconnected, common challenges.”

The report explores why the change needed isn’t happening and suggests there are many reasons, including how insecurity and polarisation are feeding off each other today to prevent the solidarity and collective action to tackle crisis at all levels.

New calculations show, for instance, that those feeling most insecure are also more likely to hold extreme political views, it also reveals.

To chart a new course, the report recommends implementing policies that focus on investment — from renewable energy to preparedness for pandemics, and insurance—including social protection— to prepare our societies for the ups and downs of an uncertain world.

The environmental crisis is increasing risks to security and peace worldwide, notably in countries that are already fragile, explains SIPRI’s Environment of Peace – Security in a new era of risk.

Indicators of insecurity such as the number of conflicts, the number of hungry people and military expenditure are rising; so are indicators of environmental decline, climate change, biodiversity, pollution and other areas, warns SIPRI.

“In combination, the security and environmental crises are creating compound, cascading, emergent, systemic and existential risks. Without profound changes in approach by institutions of authority, risks will inevitably proliferate quickly.”

Evidence shows that politicians are capable of reading and understanding those texts elaborated by economic, financial and markets experts.

Meanwhile, and despite the above and other readable – and understandable texts, they seemingly continue to neglect an essential fact, i.e., ‘By Deliberately Ignoring Risk, the World Is Bankrolling Its Own Destruction’.