STOCKHOLM, Oct 5 2022 (IPS) - After President Putin had given a speech, garnered with accusations and myths, a mega-show at the Red Square celebrated the re-entry of four Ukrainian regions to the bosom of Mother Russia. This while a mass mobilization was preparing to throw hundreds of thousands of young men into the hell of war. Why are people trusting, supporting and even admiring a political leader like Putin? One of many reasons might be his stance as Supreme Leader, a Strongman. 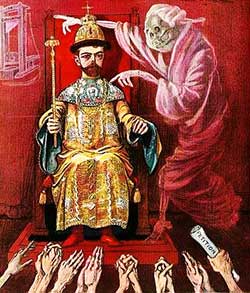 The Halo Effect is a tendency to unconditionally accommodate positive impressions of a single individual, a cognitive bias that influence personal opinions and feelings in a wide array of areas – religion, morals, patriotism, etc. The Halo Effect makes it possible for a political leader to exercise complete authority over millions of people. Historic and terrifying examples of this are the Führer Adolf Hitler, the Vozhd Joseph Stalin, the Duce Benito Mussolini, and the Great Helmsman Mao Zedong.

This is far from being a recent phenomenon, some examples of Strongmen are power-hungry personalities like Qin Shi Huangdi, Augustus, Djingis Khan, Napoleon Bonaparte, Shaka, Suharto, and Kim Il-Sung. Individuals guilty of leading their supporters into an Inferno of violence and misery. Political Strongmen generally maintain their grip on other people’s minds through lies and myths, while manipulating mass media to spread propaganda and fake news, as well as organizing spectacles and mass rallies,

In his book Sapiens, Yuval Noah Harari mentions that chimpanzees, the human specie’s closest relatives, have social instincts allowing them to form friendships and hierarchies that facilitate communal hunting, gathering and defense against predators. However, thousands of chimps cannot create a stock market, a United Nations, a Vatican. They cannot unite behind an Alpha Male, or topple him through a revolution, nor create a Government ruled by common law, or build a temple.

What makes humans unique is their sophisticated use of language, making it possible to ”gossip”, i.e. to talk about who is courting whom, who is a cheat, and who is an honest person. Such information may keep together a group of twenty, or fifty members, but seldom more than a hundred individuals. To achieve mass mobilization for work or war, much more than plain gossip is needed. According to Harari this is made possible through humans’ ability to fantasize and share their stories with others.

It is abstract notions that bind us together. Tales about deities, life after death, human rights, laws and justice. Human constructs like money and nations are based on mental innovations that have become materialized. The majority of the world’s population no longer belongs to tribes where sorcerers and priests told tales about guardian spirits and divine punishments. Instead we trust business-people, artists, priests and lawyers. Most of us are now living in a world governed by huge business corporations, mass media, sophisticated weaponry and manipulating politicians, maintained through shared myths and ideas.

Through preserved texts, computers and other means of communication we are now able to continuously increase and store large quantities of knowledge. And not only that, we are able to store and maintain information that actually is alien to ”reality” – invented conspiracies, ghosts, nations, limited liability companies, and even human rights. Fantasies are transformed into an actual existence.

We are gradually distancing ourselves from nature, creating our own world. However, this does not mean that we have got rid of our animal instincts. We are still likely to become subordinated to alpha males who use mental innovations to subdue us through repressive violence. chauvinism, and various kinds of media manipulation.

Even if Strongmen have been with us throughout human history, this does not mean that the phenomenon has constantly dominated our entire existence. Like all human behaviour, domination of our species is submitted to trends and change. It now seems to exist a current global trend that favours a return of the Strongman, combined with a spreading disrespect of compassion, human rights and a shared responsibility for the well-being of our world and planet.

The world’s two most populous nations, India and China, are currently under the spell of increasingly autocratic leaders. In India Naendra Modi, leader of the Bharatiya Janata Party (BJP), the Indian People’s Party, was once accused of condoning the Gujarat riots in 2002, when at least 790 Muslims and 250 Hindus were killed, followed by further outbreaks of violence against the minority Muslim population in the federal state of Gujarat, where Modi was Chief Minister. He is now the undisputed leader of the Indian Republic. According to the respected Indian historian Ramachandra Guha since May 2014, the vast resources of the State have been devoted to making the prime minister the face of every programme, every advertisement, every poster. Modi is India, India is Modi.

The 2019 Balakot Airstrike, during which Indian warplanes bombed alleged terrorist training camps inside Pakistan, Modi’s support increased and during the general election campaign that followed Modi declared: ”When you vote for the Lotus [his party symbol], you are not pushing a button but pressing a trigger to shoot terrorists in the head.”

In China, the hitherto all dominating Communist Party has become ”rejuvenated” and strengthened under the leadership of Xi Jinping and the party propaganda machine is creating a cult of personality around Xi Dada, Uncle Xi, whose presidential time limit was abolished in 2018, meaning that he could stay in power for life. Xi Jinping Thought has been incorporated in the Chinese Constitution, a distinction previously only accorded to Mao Zedong.

Unchallenged autocratic regimes are maintained in several nations, like those of Saudi Arabia’s royal family and the emirs in the United Emirates. The political and ruthless repression in North Korea continues unabated under the Sogun, Military First, policy of the Il-sung dynasty. However, Strongmen are present within several democracies, ostentatiously in countries like Russia, the Philippines, Turkey, the Republic of India, Hungary, Israel, as well as in the US and several nations in Latin America and Africa. Even if such politicians use to state they respect ”democratic norms”, they are nevertheless intent to erode them.

A common trait among Strongmen seems to be efforts to limit judicial independence. Both Saudi Arabia’s bin Salman and China’s Xi Jinping have used much needed ”anti-corruption campaigns” to get rid of opponents, while terrifying several members of their nations’ political elite. In China over a million people have been arrested and imprisoned in connection with such campaigns, while some have been executed. Poland’s Kaczynski and Hungary’s Orbán have changed constitutional arrangements to bring courts under their control. Donald Trump has rather than lauding the US’ independent courts and free elections, castigated judges as biased if they ruled against him and famously tried to overturn the results of the 2020 presidential election. Like Trump, Natanyahu in Israel and Bolsonaro in Brazil have complained about ”fake news” and a ”deep state” working against them. When Nethanyahu lost power in 2021 he made Trump-like claims that he had the been victim of the ”greatest election fraud in the history of any democracy.”

In Turkey more than 4,000 judges and prosecutors were purged, as well as academicians and army officers, after a State of Emergency had been declared by Erdoğan in 2016. The concept of The Deep State has for decades been used by Erdoğan to label opponents among traditional politicians and it was adopted by Trump when he declared that he was going to ”drain the swamp of Washington”.

Political Strongmen have a tendency to scoff at ”political correctness”, generally connected with human rights’ advocates, supporters of minorities and environmentalists. In spite of their dictatorial cravings, Strongmen like to state they are supported by the ”common people”, declaring that even if they disdain institutions they love ”the people”. Their politics are funded on the concept of ”we and them”, ”black or white”, and the ones who are not with me are against me. Opponents are ridiculed and demonized as ”outsiders” or ”perverts”, epithets attached to immigrants, as well as ethnic-, religious- and/or sexual minorities. It is also common to accuse shady foreign forces of plotting against the Nation. Russian and Chinese politicians regularly refer to ”Western plots to split the Nation”. Or, like Orbán, indicate that sinister, global cabals are trying to annihilate Hungarian culture by promoting mass migration and ”liberal dissolution of morals”. His favorite scapegoat is the philanthropist Georg Soros, who also have had the honour of being denounced by Putin, Trump, Erdoğan, Orbán and Bolsonaro.

Popular scapegoats can also be the EU, NATO, neighbouring nations, or Superpowers. Muslims are often sorted out as particularly dangerous, not only fanatics and terrorists, but all of them. Blaming ”others” is a simple solution to complex problems. A simplicity expressed in three words slogans – ”Get Brexit Done!”, ”Build the Wall!”, ”Law and Order!”, ”Lock them Up!”, or even in two words like ”Americans (or Italians, Hungarians, Swedes, etc.) First!”

Much more could be written about political Strongmen, let us, however, return to the enigmatic Vladimir Putin. In 2018, his powerful press secretary Dmitry Peskov, multi-millionaire as so many of Putin’s closest associates, declared;

There’s a demand in the world for special sovereign leaders, for decisive ones who do not fit into general frameworks and so on. Putin’s Russia was the starting point.

Main Sources: Rachman, Gideon (2022) The Age of the Strongman: How the Cult of the Leader Threatens Democracy Around the World and Harari, Yuval Noah (2014) Sapiens: A Brief History of Humankind.