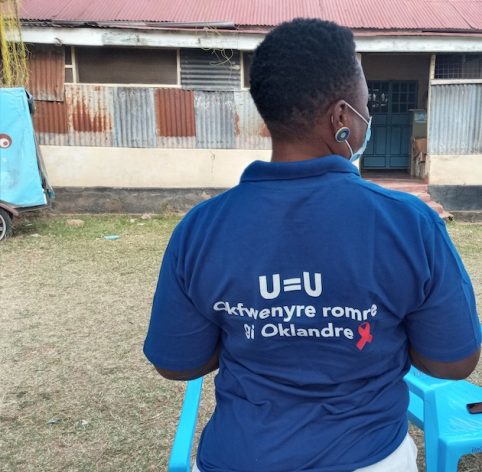 A community health worker spreads the message of screening for cervical cancer along with HIV. Credit: Joyce Chimbi/IPS

Nairobi, Dec 6 2022 (IPS) - Damaris Anyango* was recently discharged from Kenyatta National Hospital, battling the twin challenge of cervical cancer and HIV. She is 50 years old and was diagnosed with HIV nearly ten years ago.

Despite the heightened risk of developing cervical cancer due to the underlying HIV-positive condition, her first cervical cancer screening was undertaken three years ago.

“It has been a big challenge dealing with HIV and cervical cancer. When I was told that my HIV test was positive, many years ago, I thought my life was over. I started giving away my possessions, but I was counselled and accepted my status. Only to receive a second blow,” she says from her home in Homabay County.

Research by the World Health Organization (WHO) paints a female face of HIV. Women and girls in sub-Saharan Africa accounted for two in every three new HIV infections in 2021, entering a cohort of women at significant risk of developing cervical cancer.

“Women living with HIV are six times more likely to develop cervical cancer compared to women without HIV. Cervical cancer is caused by the human papillomavirus and is the most common sexually transmitted infection,” says Oscar Raymond Omondi, a cervical cancer expert and researcher across the East African region.

He says that even though most human papillomavirus (HPV) infection clears up on their own and that most pre-cancerous lesions resolve spontaneously, this is not often the case for women living with HIV.

“Women living with HIV are not always able to clear an HPV infection due to a weakened immune system. In the first place, women with HIV have a higher risk of acquiring HPV. Thereafter, pre-cancerous cells progress very fast in developing cervical cancer,” Omondi observes.

Against this backdrop, an even larger magnitude of cervical cancer looms. According to data from Kenya’s Ministry of Health, HIV prevalence is highest among women at 6.6 percent compared to men at 3.1 percent.

Today, cervical cancer is the leading cause of cancer-related deaths among women in Kenya. Yet, Mary Kamau, a nurse in HIV care and treatment at Kiambu Sub-County Level 5 hospital, says that efforts to prevent, screen and treat have not been urgently scaled up.

“Cervical cancer is a very big problem in Kenya even though it is easily preventable. One of the major barriers to combating cervical cancer is low screening. Despite the magnitude of the disease, cervical cancer screening coverage for all women in the country aged 15 to 49 years is a shocking 14 percent,” Omondi says.

Omondi concurs, saying that HIV and cervical cancer are very closely related and thrive under similar conditions, and yet, “we continue to employ very different strategies in tackling both diseases. We can fast track prevention and control of these diseases by employing a combined approach.”

Against this backdrop, the WHO released a new edition of its guidelines on cervical cancer screening and treatment to prevent cervical cancer, including 16 new and updated recommendations and good practice statements for women living with HIV.

Once they acquire HPV and if left untreated, women with HIV quickly develop cervical cancer. Health experts such as Kamau say that while women are living longer due to antiretroviral treatment, they are left significantly vulnerable to other illnesses and premature death.

“Women living with HIV are in regular, close contact with health care systems. There is a need to assess why health systems are unable to deliver cervical cancer screening services to said women on a regular basis,” she observes.

“There are definitely challenges with staffing. There is a lot more focus on HIV and especially when it comes to funding. There is outreach and sustained sensitization of HIV and very little going on in the cervical cancer camp.”

Anyango agrees, saying that she has received full support, including home visits concerning HIV, but the same cannot be said of cervical cancer.

“I was screened for cervical cancer because my daughter, who is studying nursing, insisted on it. I did not know what it was all about. In fact, I always thought cervical cancer was caused by chemicals, and since I live in the village, I thought we were safe from it,” she says.

Even though research by WHO suggests that cervical cancer could be the first cancer to be eliminated, for countries in sub-Saharan Africa, it will be a long and gruelling journey unless there is sustained sensitization of the importance of cervical cancer vaccination and screening.

“Health facilities have been providing vaccination against HPV for girls aged ten years since 2021. We need to scale up efforts to improve vaccination, screening and treatment. I believe reaching young girls in schools with this information would be a great step in the right direction,” says Kamau.

Meanwhile, Anyango urges all women to undergo regular cervical cancer screening and suggests that the government partner with churches to boost awareness levels.

“If you visit any church, you will see that a majority of the worshippers are women. This is a good place to spread the message on cervical cancer,” she suggests.

Anyango says her body has responded well to treatment, and she has returned to her fish-selling business on the shores of Lake Victoria in Homabay County.