The writer is Deputy Director, Bureau for Policy and Programme Support, UNDP 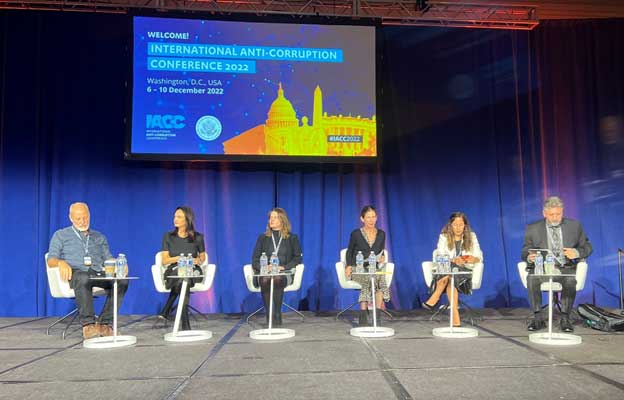 NEW YORK, Dec 16 2022 (IPS) - Climate change is the defining issue of our time. In the words of the UN Secretary General at COP27, “we are on a highway to climate hell with our foot still on the accelerator.” Cutting greenhouse gas emissions to net-zero by 2050 is crucial when it comes to meeting the 1.5 degrees Celsius target.

At the same time, if we don’t effectively deal with corruption in climate action, it will severely impede our abilities to fight the climate crisis through scaled-up adaptation and mitigation efforts.

According to Transparency International, up to 35 percent of climate action funds, depending on programme, have been lost to corruption in the last five years.

Corruption and the climate crisis reinforce each other

On the one hand, corruption fuels the climate crisis by depriving countries of much-needed revenues to act on climate change and build resilience, while also significantly altering the efficient allocation and distribution of resources to achieve development objectives.

For example, according to the U4 Anti-corruption Resource Centre, the top recipients of climate finance are among the riskiest places in the world for corruption.

On the other hand, climate impacts reinforce corruption by creating economic and social instability and inequality, fostering an environment more conducive to corruption and misuse of funds, that ultimately deprives the poorest and hardest hit.

Overcoming corruption in the race against the climate crisis requires collective action and bold partnerships between government, private sector, and civil society to recognise and combat the issue through more effective management of resources and programmes.

• Governments to step up their efforts in environmental governance,
• Businesses to strengthen business integrity,
• Media, youth, and communities to continue to advocate against corruption.

The four immediate actions that require commitment from all actors:

1. Management of funds: A much greater transparency and accountability is needed in the use and management of climate finance in adaptation and mitigation programmes.

Access to finance is often presented as the main obstacle to achieving a just transition and transformative climate action, but that’s only one side of the problem. The other side is to make sure that the much-needed resources to address climate crisis are not lost due to corruption and mismanagement.

One good example is that of the Colombian climate finance tracking system, which provides updated data on domestic, public, private, and international climate funding.

It is one of the first countries in the world to have developed a comprehensive Monitoring, Reporting and Verification (MRV) framework to transparently track the inflow and outflow of climate finance from public, private and international sources.

2. Voice and Accountability: This means leveraging the power of advocacy and accountability mechanisms, and providing civic spaces for meaningful participation of society, empowering them to hold policy makers and private sector accountable.

For example, UNDP is empowering communities in Uganda and Sri Lanka, to use digital tools to mainstream integrity and transparency in environmental resource management. In Sri Lanka,

UNDP has launched a digital platform, in collaboration with the Ministry of Wildlife and Forest Conservation and other partners, for citizens to engage and monitor illicit environmental activities. The initiative is supported through UNDP’s Global Project – Anti-Corruption for Peaceful and Inclusive Societies (ACPIS) funded by the Norad— Norwegian Agency for Development Cooperation.

Meanwhile, in Uganda, UNDP and the National Forestry Authority have launched the Uganda Natural Resource Information System (NARIS), designed to monitor and mediate deforestation throughout Uganda to protect the country’s forests and biodiversity.

In the climate change agenda, fighting corruption is not only about the money. It is also about building trust in institutions and restoring hope in the future. Studies show that ‘eco-anxiety’ is increasing, particularly amongst young people.

A global study of 10,000 youth from 10 countries in 2021 found that over 50 percent of young people felt sad, anxious, angry, powerless, helpless, and guilty about climate change. But we have also seen youth, civil society and communities taking action against the environmental damage and climate change from Serbia to India.

Through UNDP’s Climate promise alone, more than 110,000 people have been engaged in stakeholder consultations to revise key national climate strategies, known as nationally determined contributions –, helping to build social consensus and explicit recognition of the roles of youth and women’s leadership in renewed climate pledges in 120 countries.

3. Private sector has a key role to play: Public capacity needs to be strengthened to implement policies to regulate private sector activities to protect the environment. At the same time, businesses should also play their part with fair, human-rights based business practices, business integrity, and environmental sustainability goals.

4. The normative framework to protect human rights: An intensified focus on ‘environmental justice’ at global and national level is needed. On 28 July 2022, the UN General Assembly adopted a historic resolution that gave universal recognition to the human right to a clean, healthy, and sustainable environment (R2HE). UNDP promotes responsible business by strengthening human rights standards across 17 countries, with support from Japan.

The development community needs to ensure integrated approaches and break the siloes between the governance and environmental communities; and between public and private sectors to tackle the interlinked crises of corruption and climate change.