Making the UN Charter a Reality: Why is UN Day Important for Asians at the UN? 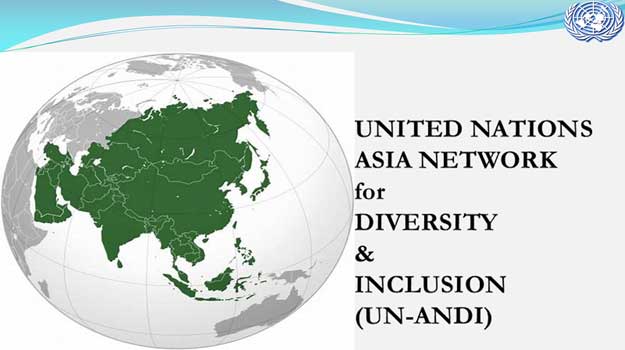 UNITED NATIONS, Dec 15 2022 (IPS) - To commemorate the seventy-seventh UN Day, the United Nations Asia Network for Diversity & Inclusion (UN-ANDI) held a panel discussion on the topic “Making the UN Charter a reality”. The discussion took place virtually on 27 October, and the event was attended by diverse participants from around the world.

The keynote speaker, Ambassador Anwarul Chowdhury, former Permanent Representative of Bangladesh to the United Nations (1996–2001), highlighted the need for the UN to be “proactive in oversight, accountability and transparency” and the importance of “practically ensuring gender diversity”.

UN-ANDI is a network of like-minded Asians of the UN system who strive to promote a more diverse and inclusive culture and mindset within the UN. This interest group was created in May 2021 after several years of groundwork.

UN-ANDI is the first ever effort to bring together the diverse group of personnel (i.e., current and former staff, consultants, interns, diplomats, etc.) from Asia and the Pacific (nationality/origin/descent) in the UN system.

“Keeping in mind the event’s theme, ‘Making the UN Charter a reality’, I would underscore that the UN Charter is the first international agreement to affirm the principle of equality between women and men with explicit references in Article 8 asserting the unrestricted eligibility of both men and women to participate in various organs of the UN.

It would therefore be most essential for the UN to ensure equality, inclusion, and diversity in its staffing pattern in a real and meaningful sense”, said Chowdhury, former Under-Secretary-General and High Representative of the UN (2002–2007).

Antonia Kirkland, who is the Global Lead on Legal Equality and Access to Justice at Equality Now, said “to keep the noble purpose of the UN and its Charter alive – encouraging respect for human rights and for fundamental freedoms for all – we must continue to hold the UN accountable to do even more to cultivate a culture of equality and non-discrimination internally and externally, including by ensuring a work environment free of sexual harassment and abuse”.

“As we celebrate UN Day, we are hoping to inspire, raise awareness, and fight for a more inclusive, just, and transparent Organization. One of the UN core values is respect for diversity. It is important to have UN staff and personnel from different backgrounds (i.e., nationality, ethnicity, culture, religion/faith, etc.)”, declared Yuan Lin, one of the UN-ANDI coordinators.

“However, the UN hierarchy and staffing currently do not reflect this reality. UN personnel of Asian nationality, origin, or descent are not properly represented, especially at the senior management level. This glass ceiling has deprived the Organization of meaningful contribution from our community and created an unjust and discriminatory work environment”, said Lin, who is serving in the UN peacekeeping mission in the Democratic Republic of the Congo as Chief of the Business Relationship Management Unit.

In November this year, the world’s population reached 8 billion. The Asia-Pacific region is home to around 4.3 billion people, which is equivalent to 54 percent of the total world population.

Article 101 (3) of the UN Charter affirms that “due regard shall be paid to the importance of recruiting the staff on as wide a geographical basis as possible”.

In the organizations of the UN common system, however, staff from Asia and the Pacific constituted only about 19 percent of staff in the Professional and higher categories, according to the 2021 annual report of the International Civil Service Commission.

The majority of senior and decision-making posts are held by staff from the global North. Most internships and JPO programs favor the global North, and this contributes to the issue further, as these are entry points to regular jobs in the UN system.

The report of the Secretary-General’s Task Force on Addressing Racism and Promoting Dignity for All in the United Nations Secretariat confirms that there is a significant lack of diversity in senior managerial positions (P-5, D-1, and D-2 levels) at the UN. Among staff at the P-5, D-1, and D-2 levels, only 16 percent were from Asia-Pacific States as of 31 December 2020.

The issue of racism in the UN system is deep-rooted with many forms and dimensions. There are also structural issues in the policies of the UN system enabling this situation.

Article 1 (3) of the UN Charter asserts that one of the purposes of the UN is to promote and encourage respect for human rights and for fundamental freedoms for all without distinction as to race, sex, language, or religion.

Aitor Arauz, President of the UN Staff Union and General Secretary, UN International Civil Servants Federation (UNISERV), pointed out that “creating an actively anti-racist work environment is not a passive gain – it requires active engagement and daily work to understand each other, value the cultural wealth that our differences bring to the UN, and overcome the biases we all inevitably have. Surveys and direct interaction with constituents reveal that UN personnel of Asian descent face specific forms of bias and discrimination that must be actively addressed.”

He renewed the Staff Union’s commitment to the cause of anti-racism.

Tamara Cummings-John, Steering Committee member of the UN People of African Descent, who is a Senior Human Resources Officer at the World Food Programme in Kinshasa, said, “There is still so much for us to do – and there is so much for us to learn from the outside world, particularly the private sector and above all by listening to our personnel to address the issues relating to racism and racial discrimination in the UN system.”

The report of the Secretary-General’s Task Force on Addressing Racism and Promoting Dignity for All in the United Nations Secretariat agrees that UN staff perceive national or ethnic origin as the primary grounds for racism and racial discrimination.

Staff are reluctant to report or act against racial discrimination when they witness it because they believe nothing will happen, lack trust, or fear retaliation, possibly suggesting a low level of solidarity with those who experience racial discrimination and a lack of faith in the established mechanisms in addressing this issue.

Efforts towards making the UN Charter a reality

Tanya Khokhar, who is Consultant of Gender Racial and Ethnic Justice – International at Ford Foundation, said, “Invisible and hidden power seeks to challenge certain norms and practices of who gets preferential treatment, who is promoted, when trying to build a transparent, inclusive and equitable culture in an organization. This is the hardest to do and it takes years of innovative practices both at the team and institutional levels”.

She further noted, “Going back to the work you all are doing through the network, it’s important to recognize the history, cultures, and rich diversity of the regions you represent and build a strong community, to advocate for one another, to align on agendas and lift each other up”.

UN-ANDI supports the initiatives implemented by the Secretary-General on addressing racism and promoting dignity for all in the UN. It works closely with the UN Staff Union in its efforts towards combating racism. It also promotes a collaborative spirit with other networks and institutions with similar objectives, within and outside the UN.

UN-ANDI contributed to the current review of measures and mechanisms for preventing and addressing racism and racial discrimination in the UN system organizations conducted by the Joint Inspection Unit.

In the summer of 2022, UN-ANDI conducted its first survey on racism and racial discrimination in the UN system faced by personnel of Asian descent or origin, offered in five languages. The purpose of the survey was to capture data and pertinent information, reflecting the Asian perspective, and identify the root causes of racism in the UN system.

UN-ANDI will issue a report on the survey findings to address many critical issues of racism and racial discrimination in the UN system.

Lin proclaimed that “as members of UN-ANDI, with our talent, education, experience, and diversity, we can make a difference and contribute immensely to the UN by engaging our community members in a variety of pressing issues facing the UN!”

UN-ANDI believes that its perspectives and observations will facilitate the journey towards the paradigm that is ingrained in the UN Charter and the Universal Declaration of Human Rights.

Shihana Mohamed, a founding member and one of the coordinators of UN-ANDI and a Sri Lankan national, is a Human Resources Policies Officer at the International Civil Service Commission.

The opinions quoted in this article represent the personal views of the individuals who expressed them. Please contact via email at UnitedNationsAsiaNetwork@gmail.com to connect or/and collaborate with UN-ANDI.