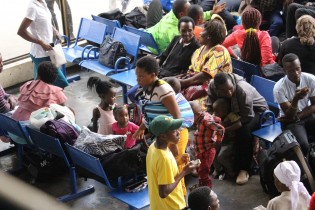 By Michelle Chifamba
Ethel Maziriri, 27, holds an Honours Degree in Social Work from the University of Zimbabwe, but instead of working in her chosen profession, she works as a cashier in one of the country’s leading clothing retail company. And it’s not by choice.

By Michelle Chifamba
On top of a small wooden cabin in Norton, a dormitory town outside the capital of Zimbabwe, is a solar panel that Silvester Ngunzi uses to light up his household.

By Michelle Chifamba
Like many other aspiring voters, Emilia Magirazi, 27, braved a chilly winter's morning as she waited patiently to register as a voter in the slow-moving queue at Kuwadzana 8 Primary School in Zimbabwe’s capital, Harare.

By Michelle Chifamba
More than three decades after Zimbabwe’s independence, the idea of developing its rural areas seems to have been laid to rest, as points intended for development have been turned into beer outlets, which seem to be more lucrative than industry.
ADVERTISEMENT ADVERTISEMENT