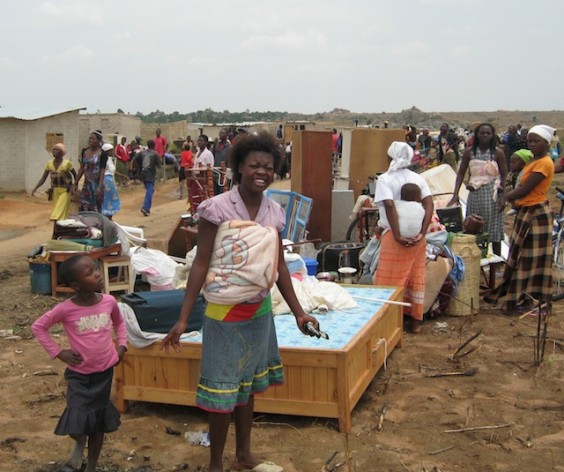 HARARE, Jun 24 2013 (IPS) - When Maude Taruvinga* votes in Zimbabwe’s elections later this year, she will be voting for her local female politician as she has placed her hopes for a better future on the presence of more women in this southern African nation’s legislature.

In January 2012, Taruvinga became a victim of Zimbabwe’s patriarchal traditions when her in-laws forced her out of her matrimonial home in Marondera, Mashonaland East Province, after her common-law husband passed away intestate.

“I eventually decided to leave my husband’s land because I could not endure the harassment any more. No one could help me. Even the police took the side of my husband’s relatives.

“Many widows find themselves thrown out of their homes by greedy relatives and give up because of a lack of knowledge and (because the do not receive) protection from the police,” 45-year-old Taruvinga told IPS.

The Zimbabwe Administration of Estates Act No. 6 of 1997 stipulates that if a spouse dies without a will, the surviving partner inherits their immovable property. Prior to this act, a husband’s estate was dissolved if he died intestate.

However, Zimbabwe Women Lawyers Association director Emilia Muchawa told IPS that although 86 percent of the country’s women earn a living farming communal land allocated to their husbands by traditional chiefs, legislation is silent on the issue of women’s rights to inherit this land.

“Customarily chiefs allocate land to male heads of households, but women do not automatically inherit this upon their husband’s death.

“They may be evicted from the land when widowed, regardless of the years they spent married. Many who remain on the land do so at the goodwill of their in-laws or traditional leaders. Childless widows are often evicted, as are young widows who refuse to be physically ‘inherited’ by a male relative of their late husband,” she told IPS.

Currently, Zimbabwe’s new constitution, which was enacted into law in May, provides for equality of both sexes, and activists who spoke to IPS said that there was a need for laws to be revised to reflect this, and to protect widows married under customary law.

Civic groups here believe that if more women were elected to Zimbabwe’s parliament, they would be more vocal in addressing this and other discriminatory practices against women.

Women in Politics Support Unit (WiPSU), a non-governmental organisation that aims to increase the participation of women in policy- and decision-making, launched a “Vote for a Woman Campaign” ahead of the presidential elections.

The campaign is meant to help the country achieve gender equality in accordance with the Southern African Development Community Protocol on Gender Development .

The protocol includes several progressive clauses and 23 set targets, including the target that women will hold 50 percent of decision-making positions in public and private sectors by 2015. Women constitute some 6.7 million of Zimbabwe’s 12.9 million people.

“The ‘Vote for a Woman Campaign’ will accelerate the number of women taking up positions in parliament and local government. It is meant to raise awareness among the general populace to vote for a woman in the hope that women in parliament will improve the lives of women at the grassroots,” WiPSU director Fanny Chirisa told IPS.

Marlene Sigauke, programmes manager at the Center for African Women Advancement, an organisation that works for the development of African women, told IPS that policies and political party manifestos on gender equality must be fully implemented.

“Women in power should be able to develop strong, gender-sensitive policies (that benefit) women at the grassroots,” she said.

Deputy Minister of Labour and Social Welfare Monica Mutsvangwa told IPS that it was time to fight for women’s rights.

“The constitution now approves an 18 percent quota of women’s participation in politics. We are therefore going to use this constitution to implement policies and turn theory into practice,” Mutsvangwa said.

Member of parliament and chairperson of the Regional Women’s Parliamentary Caucus Beatrice Nyamupinga told IPS that although Zimbabwe was signatory to a number of conventions, the government has failed to implement these policies.

“Many victims (widows not allowed to inherit their husband’s property) are afraid to report their cases for fear of being judged and interrogated by authorities and the police. The new constitution has provisions for gender equality and certain clauses protect the rights of women. If women themselves are not present in parliament to make sure that the laws are implemented, then the provisions will never come to pass,” Nyamupinga said.

“Only a woman in parliament is capable of changing the life of another woman.”