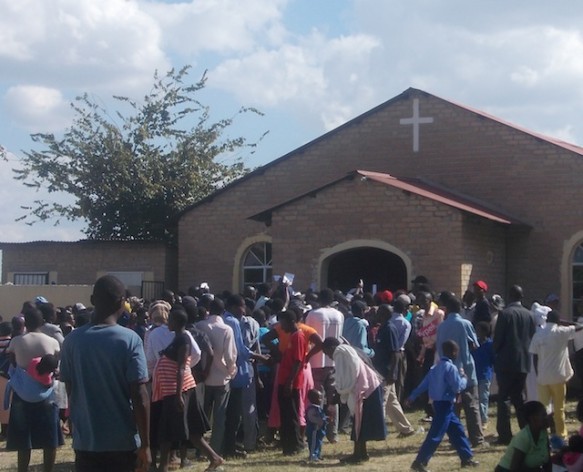 At most voter registration centres in Zimbabwe there are long queues and the process to register a tedious one. Most civil society organisations believe that this is a deliberate attempt by President Robert Mugabe’s supporters to frustrate people and prevent them from registering. Credit: Michelle Chifamba/IPS

HARARE, Jul 6 2013 (IPS) - Like many other aspiring voters, Emilia Magirazi, 27, braved a chilly winter’s morning as she waited patiently to register as a voter in the slow-moving queue at Kuwadzana 8 Primary School in Zimbabwe’s capital, Harare.

Zimbabwe’s second round of voter registration commenced on Jun. 19 and is expected to end on Tuesday Jul. 9, with the presidential elections set for Jul. 31. A first round took place over 20 days in April and May.

But people like Magirazi are finding it hard to put their names down on Zimbabwe’s electoral role. This is because she is a foreign national: Magirazi was born in Zambia, of Zimbabwean parents.

“I arrived here before the break of dawn, and by lunch time I eventually got service from the officials. But they told me that I am an alien and not eligible to register. I was referred to the army barracks or the police for clearance of any criminal offences,” Magirazi told IPS.

While the 12th amendment of Zimbabawe’s Citizenship Act 2011 outlaws dual citizenship, the country’s new constitution, which was enacted in May after the first round of voter registration, recognises those born abroad of Zimbabwean parents to be citizens. It also recognises all people born in this southern African nation, regardless of their parents’ citizenship, as Zimbabweans.

But like Magirazi, scores of other foreign nationals have been denied the right to register as voters, despite the stipulations in the new constitution.

According to the Harare office of the International Organization for Migration, between 500,000 nd four million Zimbabweans are living abroad. Most fled Zimbabwe for economic reasons as between 2003 and 2009 the country had one of the worst rates of hyperinflation in the world.

With the word “alien” inscribed on her national identity document (ID), Magirazi was referred to the Registrar General’s office to apply for a new one. The Zimbabwe Electoral Commission (ZEC) has stipulated that persons previously categorised as foreign nationals should apply for citizenship and national ID cards that reflect this changed status in order to vote.

“They refused to process my national ID because my birth certificate was soiled and they said that I should get a new one … Due to this cumbersome process, I might not be able to get a new ID to register as a voter before the process ends,” Bachi told IPS.

The Election Resource Centre (ERC), a local NGO, believes that the Registrar General’s office is deliberately trying to frustrate first-time voters in order to prevent them from voting.

“It seems to be happening to a lot of prospective voters. Foreign nationals will not be able to vote in the next election. For the first time they were able to enjoy being citizens under the new constitution, but they will not be able to exercise their right under prevailing conditions.

“The stipulations by the electoral commission are contradictory to what is happening on the ground. A number of people are being denied the right to claim their citizenship at the Registrar General’s office despite the ZEC’s stipulations that those formerly-categorised as ‘aliens’ can apply for new IDs,” ERC director, Tawanda Chimhinhi, told IPS.

“Despite the fact that the elections are only three weeks away, there has been no serious attempt by the ZEC to educate Zimbabweans on the impending vote and their right to vote. The information blackout by the ZEC is a deliberate ploy meant to keep unsuspecting citizens in the dark. The possibility of a free and fair election will remain a pipe dream unless these issues are addressed,” he told IPS.

Prime Minister Morgan Tsvangirai’s chief of staff, Ian Makone, told IPS that many more people were being turned away from registering to vote.

“More than 50 people failed to register on the grounds that they were aliens and were sent back home, while the elderly who did not have IDs were told to get clearance from KG ‘6’ an army headquarter where national documents such as passports are processed. Cabinet must therefore revisit this issue because this is taking place all over the country,” he said.

However, on Thursday Jul. 4, the Zimbabwe Constitutional Court overturned appeals to delay the elections. Many here say that the haste with which President Robert Mugabe set the election date has not allowed for sufficient time to reform the country’s security forces. In previous elections, state security have been accused of instigating violence against those opposed to Mugabe.

Civil society groups have said that holding the elections on Jul. 31 would likely incite fear and possibly result in an unfair election.

Zimbabwe Election Support Network, a coalition of NGOs monitoring the elections, said that the nature of the voter-registration process, the atmosphere associated with it, and the disruption and intimidation of civil society were an attempt by Mugabe’s Zimbabwe African National Union – Patriotic Front to instigate violence at the polls in order to reclaim its political legitimacy. Mugabe has been in power for 33 years in a reign marred by corruption, violence and political oppression.

The Youth Agenda Trust, a youth networking organisation, added that the process had been deliberately designed to deny bona fide citizens their right to vote.

“The cumbersome processing of ‘aliens’ is a direct violation of the rights of the people of Zimbabwe and a breach of the constitutional right to vote as stipulated in the new constitution. The time that has also been allocated to register is not enough as most people have either failed to cope with the long and winding queues and or have not had time to visit the centres in the short period due to other competing interests,” director of Youth Agenda Trust, Fortune Nyamande, told IPS.